For people without health care or who are losing their jobs, the love affair with the free market is already over--the question is when they'll find somebody new.

IN FRANCE, you pay nothing to go to college. In Britain, the National Health Service is free. And in Sweden, any woman who gives birth receives two years of paid maternity leave.

Meanwhile, in the richest country on the planet, the United States, college graduates are buried in debt, medical bills are the leading cause of personal bankruptcy, and if you have children--well, you're on your own.

It shouldn't come as any surprise that the former countries have formidable labor unions and even independent labor parties. In the latter, we have no such labor party.

His work is both an expression of a new consciousness and a catalyst for its development. Millions of people will find, in this film, confirmation of their own ideas, frustrations and aspirations.

Crucially, Moore reminds us of the high hopes that were invested in the presidential campaign of Barack Obama. Obama talked about "redistribution," and for that, the right wing labeled him a "socialist," which only made him more popular, and left young people curious about "the S word."

IN MANY ways, Capitalism plays like a long-delayed sequel to Roger and Me, the film that put Moore on the map precisely 20 years ago. Like Roger, Capitalism makes clever use of vintage propaganda reels and home movies, and casts Moore as a barnstorming muckraker, pounding on the doors of power with cameras rolling.

The love story begins with Moore's own home movies, through which we experience his nostalgia for the middle-class lifestyle his family enjoyed, based on the once-thriving automobile industry in Flint, Mich. In exchange for their loyal service, workers could count on jobs for life, family wages and a good pension. 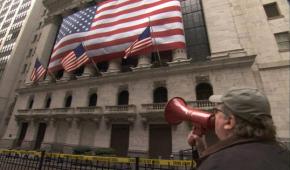 But that social contract was shredded in the 1970s, and Moore runs down the numbers on-screen with graphs that explain our pain--workers' growing productivity vs. their stagnating wages vs. the corporations' skyrocketing profits.

Moore tours us around the "heartland"--foreclosures in Cleveland, evictions in Peoria, young people incarcerated for profit in Wilkes-Barre--and asks what all of these things have in common. The answer: each is an example of how the free market works against human needs.

We are shown a leaked Citigroup memo that boasts of the results of Wall Street's unbridled profiteering. America has become a "plutonomy," the memo gloats, where 1 percent of the population effectively owns and controls everything that goes on. The memo warns about a lingering danger--everyone else still has 99 percent of the vote--and asks: "Is there a backlash building?"

On virtually every issue that matters, Obama has deeply disappointed his supporters. Capitalism, however, takes us back to a moment when the Obama campaign mobilized the very backlash Citigroup foresaw. Moore shows us the faces of people--particularly African Americans--living through a moment of extraordinary change: Election Night 2008. We see the tears of joy, the dancing in the streets, and we remember the feeling that things were changing for the better in this country.

Capitalism: A Love Story, written and directed by Michael Moore.

Moore shows how "Government Sachs" alums worked in the Bush administration and in the Obama administration to manipulate the financial crisis to their advantage--at our expense.

Anyone who's seen the trailer in theaters or on television will know that Moore shows up on Wall Street with empty sacks to "get the money back for the American people." It's pure shtick, but the point still lands--these people wrecked the economy and were rewarded with trillions of our dollars.

While Moore is happy to skewer Democrats and Republicans alike for corruption and corporate cronyism, he leaves the question more open regarding Obama.

Viewers may be shocked to see and hear the footage of President Franklin Delano Roosevelt arguing that jobs, homes, education and, yes, health care should be guaranteed to all Americans under a new bill of rights. We should keep in mind that FDR was speaking in a context of a labor movement that was organizing near-insurrections in several American cities, and was on the brink of forming its own political party.

One gets the feeling that the intended audience for this film isn't only those who are questioning capitalism, but also Barack Obama personally. Moore seems to be saying to the president: "You don't have to be a corporate tool, you could be an FDR."

BUT THERE'S another, more radical dimension of the film that mainstream reviewers have missed: Moore points to solutions beyond what Obama may or may not do. He points to what we could do to replace capitalism.

But what would that rebellion look like? What is the alternative to the free market?

Here, Moore turns our attention to the arena that does the most to define our lives--the workplace. Most workplaces, he says, are "dictatorships," with zero democracy.

But is democracy possible at work? Capitalism takes us inside the Republic Windows & Doors factory in Chicago, where workers staged an old-fashioned occupation of the plant when it faced closure without workers getting promised severance pay.

Inside the occupied factory, we see workers meeting, discussing and making decisions together. Moore shows us a worker-owned robotics plant, where employees make collective, democratic decisions about their work. Moore is introducing the audience to a fundamental idea of socialism--workers' democracy.

There's much more to the case for socialism than this film takes up. But Moore is expressing something basic about what's wrong with the system we live under, and what could replace it. "Capitalism is evil," he says, "and you cannot regulate evil. You have to eliminate it and replace it with something else...with democracy."

For people without health care, who are losing their jobs and losing their homes, the love affair with the free market is already over. They may not know what the solution is, but many are ready to discuss the fact that capitalism itself is the problem.

In other words, being ready to break up isn't the same thing as finding someone new. But millions of people are starting to look. If you're reading these lines, chances are you're already on your way. Go ahead and make the breakup official--get yourself to the nearest socialist meeting. And while you're at it, bring three or four of your friends with you.