Another promise broken to veterans

Martin Smith, a member of Iraq Veterans Against the War, reports on the bureaucratic negligence that left him and thousands of other veterans who were counting on GI Bill benefits to pay their tuition expenses scrambling to stay in school this fall.

JOSHUA HERNANDEZ, a former Army Specialist who served a tour of duty in Afghanistan, was one of tens of thousands of veterans who flooded regional Department of Veterans Affairs (VA) offices on October 2.

Some people were lined up at the offices as early as 3 a.m. to receive what the VA called an "emergency loan"--to help veterans in dire straits as they wait for the agency to clear its massive backlog of GI Bill payments to veterans attending college this fall.

According to the VA, a two-step data entry process delayed payments from the new GI Bill, forcing veterans to live hand-to-mouth to pay tuition and rent after the promised help failed to arrive. Since May, almost 290,000 people have applied for the new assistance, but thus far, only about 12 percent have received any funding.

Amber Oberg is a veteran and a single mother of two who spent eight years in the Army. "I didn't expect to get out of the military, and then have to wait and wait for the education money that was promised me," said Oberg. Oberg attends the University of California-Davis, has a house in foreclosure, and is desperately waiting for her GI Bill check to make ends meet. 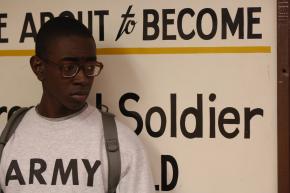 According to the Chicago Tribune, some VA officials blame veterans for applying late. "Veterans were eligible to apply for the education assistance beginning May 1, but most waited until late summer to file, the VA said," according to the Tribune.

However, interviews with veterans at VA offices showed the real problem was poor planning and bureaucracy. In fact, many at the Chicago Regional Office said they had applied in May and had waited over three months, only to receive late tuition and bill notices, coupled with disappointment.

Passed in June 2008, the Post-9/11 GI Bill dramatically increased educational benefits as part of a much-needed boost to help veterans keep up with skyrocketing tuition costs. While the old Montgomery GI Bill paid a flat rate, the new benefits pay a varying amount that covers general fees, housing and books, and specifically aids those who served after 9/11.

But with the U.S. military stuck in two occupations, the new assistance was also a means to boost sagging recruitment rates. Faced with the unpopularity of the U.S. war on Iraq and, according to polls, increasing public discontent with the occupation of Afghanistan, recruiters began a marketing campaign to promote the new GI Bill and transform the image of the military.

Surveys show that education is one of the top reasons why working-class youth join the military. However, actually using such benefits has always carried stipulations that put them out of reach to many.

As under the previous Montgomery GI Bill, only military recruits who pay into the educational program for 12 months are guaranteed benefits. Given the near-poverty wages of entry-level military enlistees, sacrificing a chunk of your wages for education is nearly impossible for those supporting a family or, as is increasingly the case, those stuck with large debts.

As recently as 2005, the government was taking in $72 million more from troops paying into the education fund than it were paying out--because of the many obstacles, bureaucratic and otherwise, that veterans face once they are out of the military and considering whether to attend university.

AT THE Chicago regional VA office, frustration mounted as veterans waited up to three hours for their "emergency loan," with lines running out the door.

Hernandez, a student at the College of DuPage in suburban Chicago, is two months behind on his rent and car payments, and is going to the food pantry at his local church for help. "It's either pay for my books or buy food," he explained.

Alex N. is currently in the Army Reserves and attends nursing school at the University of Illinois at Chicago. He, too, has been unable to fix his car because he had to pay more than $1,200 for his books this semester, which he had expected his GI Bill benefits to cover. Now, Alex is relying on family and friends to drive him to and from the hospital, where he works late hours.

Others at the Chicago office described having to get second jobs, which makes attending classes difficult, or living off credit cards to pay their bills.

In order to stay in school and pay rent, Iraq veteran Phil Aliff described how veterans he knows had resorted to selling their post-traumatic stress disorder medications on the black market. Others are simply dropping out of school because of the impossibility of staying afloat financially.

Politicians always clamor that we have to "support our troops" and take care of our veterans first. The White House Web site quotes Obama's proclamation that "we...owe our veterans the care they were promised and the benefits that they have earned."

But the VA's latest failure to deliver on educational benefits--coming just a few years after the scandal of VA health care negligence at Walter Reed Army Medical Center in Washington D.C.--leaves these lofty assertions sounding like just another example of the politicians' empty rhetoric.

And given Obama's increasingly clear record of impressive speeches followed by little action, some veterans are calling his administration "the audacity of nope."

While the veterans at the VA office in Chicago expressed relief at finally receiving their first check, the bitterness persists. Bureaucratic red tape and mismanagement always holds up money and benefits for veterans, but there always seems to be an abundant supply of cash for bank bailouts, the "cash for clunkers" program to help U.S. automakers, a failed Olympic bid for the city of Chicago, or a bloated Pentagon budget.

"The Post-9/11 GI Bill was passed over 15 months ago," said Vince Emanuele, a former Marine and member of Iraq Veterans Against the War. "You would think the government could have better prepared for this."