A rebel in every way

Khury Petersen-Smith and Amirah Santos-Goldberg pay tribute to a determined revolutionary who was taken from us too soon.

ON NOVEMBER 6, the movement for a better world lost one of its committed activists. Dafni Ioannou passed away at the age of 31 after battling breast cancer for over a year. There are not enough words to explain how much she will be missed by the many who love her.

Dafni was born in Athens, Greece, and emigrated with her family to New Hampshire when she was five. She grew up in a homogenous, white town with few other immigrants. Her experience, often as the only student in her class with an accent and whose family came from a different country, was difficult. Dafni's status as an immigrant, as well as a girl and then a woman, meant that her ideas and talents were often dismissed, something that she became keenly and painfully aware of early on.

All of this left a strong imprint on Dafni. Among other influences, her life as an outsider led her at an early age to gravitate toward oppressed people, especially those who resisted their oppression. When Dafni was 12, she read the Autobiography of Malcolm X, a book that had a profound impact on her--she found herself in the experience of Malcolm X. 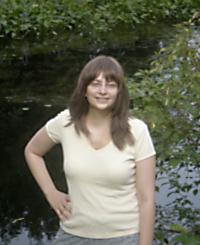 Dafni's solidarity with all oppressed people wasn't just a matter of sympathy--she truly identified with them. So it was with other immigrants, African Americans and Native Americans. She was adamant about gender equality and women's liberation. She called out sexism, racism, homophobia and all oppression wherever she saw it. Above all, Dafni embraced the Palestinian people. She dedicated herself to the struggle against Israeli brutality and for a free Palestine.

Dafni was a rebel in every way. In her adolescence, she discovered and embraced hip hop, contributing to her identity as someone "different" in her stultifying, conservative and white New Hampshire town. Dafni's parents remember displays of her artistic talent when she was a child, and Dafni pursued her art as an adult.

Throughout her higher education, Dafni earned a reputation as the student who would speak up in class to challenge conventional, Eurocentric and conservative notions regarding history and art--and professors who defended them. Though Dafni familiarized herself with prominent artists and art movements of Western art history, she was drawn toward "outsider art," and African and Mexican folk art--art that was marginalized from the canon taught in her courses. Dafni's own art expressed her solidarity with Palestine and her vision for its liberation.

Dafni's art spanned several media. Her need to work full-time, usually waiting tables, and the exclusiveness of most art establishments prevented Dafni from being able to display her work in public. She sought to take her talent to public schools, where she wanted to be an art teacher. Even those closest to Dafni weren't aware of the scope and talent of her work. Tragically, the greatest showing of her art came at her memorial service.

Dafni met and fell in love with a Palestinian man named Yousef. Because of their immigrant statuses, Dafni and Yousef spent the vast majority of their marriage separated--Yousef in Canada and Dafni in the U.S.

After the September 11 attacks, Dafni encountered the International Socialist Organization at a Socialist Worker newspaper sale in Cambridge. She joined soon after and dedicated herself to organizing for human freedom. To many, Dafni was known as Stephanie Smith--like countless immigrant activists in this country, she went under an alias in her political organizing to evade repression by the government.

Dafni was a fighter and learner. She soaked up the histories of oppressed people, and her knowledge was encyclopedic. She could easily give a concise people's history of Eastern Europe, and effortlessly and passionately lay out an analysis of the current politics of Lebanon.

IN AUGUST 2008, Dafni was diagnosed with a rare and very aggressive form of breast cancer. That fall, she returned to the ISO after a hiatus and confided in a handful of comrades that she was sick. Dafni said she didn't know how long she had to live, but that with the time she had, she wanted to be part of the struggle against injustice and for a better world.

Like all of us, Dafni was horrified and outraged by Israel's savage assault on Gaza last winter. But she took immeasurable pride knowing that many of her last days were spent organizing solidarity with Gaza. She helped organize an incredible panel featuring Noam Chomsky, Ahmed Shawki and Assaf Kfoury in Allston, Mass., that drew 500 people, as well as the largest Palestine solidarity march in Boston that anyone could remember and many other smaller events.

Dafni did all of this while undergoing chemotherapy and radiation treatment. She kept her struggle with her disease hidden because she didn't want to be treated differently from other comrades, and because she hated so much the idea of dying. She fought for her life tooth and nail.

All the while, Dafni's rebelliousness was evident. She protested the dehumanizing treatment of patients in the U.S.'s bizarre and inefficient health care system. She noted the absurdity of the fact that investigation of her disease by doctors focused exclusively on her genetic history, ignoring the environmental causes of the cancer epidemic. Indeed, several people from the school where she worked have gotten sick. She also pointed out the sexist reality that because breast cancer is a women's disease, research to cure it is underfunded.

Confronted with the prospect of her death, Dafni had to answer the questions that we all must answer at some point, but that no one ever wants to be asked at age 31. Yet Dafni answered them brilliantly. She lived her last year with grace in a hellish situation.

Dafni's remains will be taken to her native Greece, and to her other home in Palestine. She never got to see it with her own eyes. She and Yousef had a dream of visiting together. Now they will go, Yousef taking Dafni there.

As Dafni lay on her deathbed, her love Yousef vowed to meet her in a better place--a world without borders and visas, where people could live freely. Though she is at peace, no longer fighting against these realities that shaped her life, Dafni would want us all to fight so that the world that Yousef promised can be enjoyed by the living, here on Earth.

Goodbye, Dafni, our comrade, our inspiration, our friend. You have left an imprint in our hearts that will never go away. We will miss you and take your memory into all of our work for the world you always dreamed of.