Suicides that the Army hides

Independent journalist Dahr Jamail, author of The Will to Resist: Soldiers Who Refuse to Fight in Iraq and Afghanistan, reports on allegations that the Army is purposefully obscuring the number of soldiers’ suicides.

ACCORDING TO a soldiers' advocacy group at Fort Hood, the U.S. base where an Army psychiatrist has been charged with killing 13 people and wounding 30 in a November 5 rampage, the official suicide figures provided by the Army are "definitely" too low.

Chuck Luther served 12 years in the military and is a veteran of two deployments to Iraq, where he was a reconnaissance scout in the 1st Cavalry Division. The former sergeant was based at Fort Hood, where he lives today. "I see the ugly," Luther told Inter Press Service (IPS). "I see soldiers beating their wives and trying to kill themselves all the time, and most folks don't want to look at this, including the military."

Luther, who in 2007 became the founder and director of the Soldier's Advocacy Group of Disposable Warriors, knows about these types of internal problems in the military because he has been through many of them himself.

Luther told IPS that he believes the real number of soldiers at Fort Hood committing suicide is being dramatically underreported by the military: 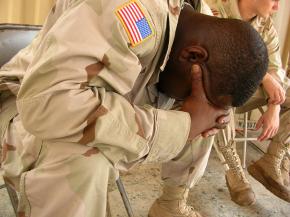 There are suicides of active-duty troops occurring regularly both on and off base. One of them I knew personally since I served with him in Iraq and he was one of my soldiers, and they still have him listed as under investigation for suicide.

From what I know right now, there are at least three suicides they are not reporting at all. Most notably, there is a soldier who committed suicide that the Army confirmed through a press conference, and this is not being reported, and I'm working with the Pentagon to try to find out why that is not being reported. The Army won't even release his name.

Yet Luther believes the situation is even worse. "I definitely believe there are more than these. If this is what they've hidden from us that we know of, we can rest assured there are many, many more than this. We filed a FOIA [Freedom of Information Act] to get information from them [Army], but they bog you down in red tape," he said.

DUE TO the military's continued attempts to mask the true number of suicides in the ranks, along with an ongoing refusal to make the radical policy changes necessary to properly treat soldiers and psychiatric care providers exposed to secondary post-traumatic stress disorder (PTSD), Luther fears the worst for the future.

"There will be more November 5 [referencing the recent Fort Hood tragedy] attacks on fellow soldiers, and they will likely be even more drastic," he said. He continued:

Everybody has to outdo someone, so the next are likely to be worse. Violence breeds violence. I was trained to be very violent in combat as a scout...we killed or detained Iraqis before anyone else got there. Two months ago I warned the Army's Chain of Command that before we had an attack by a soldier on other troops when they come home, we needed to make some dramatic changes.

At the time of the interview, one week after army psychiatrist Major Nidal Hasan's shooting rampage left 13 dead and over 30 wounded at Fort Hood, Luther informed IPS that in the previous three days at Fort Hood, "I've heard commanders tell soldiers requesting psychological help that they are full of crap and don't have PTSD...so if we can't implement these needed changes quickly and rapidly we are going to have more loss of life on U.S. soil by soldiers killing other soldiers."

While not on the scale of the recent shooting incident, several other killings by soldiers have been reported at Fort Hood over the last two years.

According to official military statistics, Fort Hood already suffers the highest number of suicides among Army installations since the invasion of Iraq in 2003. While Luther believes the number is far higher, Army officials at Fort Hood admit to at least 10 suicides on the base from January to July of this year, and at least 75 "confirmed" suicides since 2003.

Several years of repeated war-zone deployments are taking their toll, as Army personnel are experiencing record rates of PTSD, depression, other mental health problems, alcohol and drug abuse, and suicides.

According to the Army Suicide Event Report, a total of 99 soldiers killed themselves in 2006, the highest rate of military suicides in the 26 years the military has been keeping statistics on suicides. More than a quarter of them were by troops in combat postings in Iraq and Afghanistan. The ﬁgure does not include post-discharge suicides by military personnel.

In 2007, at least 115 suicides were reported by the Army, another record. Last year set another record, with at least 133 reported suicides, in addition to there being a record number of suicides in the Marine Corps that year.

The suicide rate for the Army for 2008 was calculated roughly at 20.2 per 100,000 soldiers, which for the ﬁrst time since the Vietnam War is higher than the adjusted civilian rate. Thus far, 2009 is on pace to set another record for the number of suicides in the Army.

PRIVATE MICHAEL Kern, an active-duty Iraq war veteran who is based at Fort Hood, served in Iraq from March 2007 to March 2008.

On November 9, four days after the shooting spree at Fort Hood, Kern told IPS, "The 20th Engineering Battalion was hit hard in this rampage. They are scheduled to deploy in January to Afghanistan, and lost a lot of good folks on Thursday [November 5]. I personally know a soldier in that Battalion who attempted suicide last night."

Mental health problems and suicide appear to now be systemic in the military. By October 2007, data within the Army's fifth Mental Health Advisory Team report indicated that approximately 12 percent of combat troops in Iraq and 17 percent of those in Afghanistan were coping by taking prescription antidepressants and/or sleeping pills to cope.

In 2008, the Daily Telegraph of London reported that two out of five suicide victims among troops in Iraq and Afghanistan have been found to be on antidepressants.

In April 2008, the RAND Corporation released a stunning report revealing, "Nearly 20 percent of military service members who have returned from Iraq and Afghanistan--300,000 in all--report symptoms of post-traumatic stress disorder or major depression, yet only slightly more than half have sought treatment."

A 2008 court case in California revealed a Department of Veterans Affairs (VA) e-mail that revealed 1,000 veterans who are receiving care from the VA are attempting suicide every single month, and 18 veterans kill themselves daily.