An embodiment of our tradition

THE FRENCH radical philosopher and political leader Daniel Bensaïd died Tuesday morning after fighting a painful cancer for several months at the end of close to 15 years of living with AIDS.

One of the key figures of the French student revolt of 1968, Bensaïd was a prominent founding member of the Ligue Communiste Révolutionnaire (LCR), along with Alain Krivine. He remained in the leadership of this organization, an affiliate of the Trotskyist Fourth International, until he was struck by illness.

Bensaïd continued nevertheless to play a central role as a contributor to the political thinking of his movement, including in the creation of the 10,000-member Nouveau Parti Anticapitaliste (NPA), represented by Olivier Besancenot, the well-known young postal worker and occasional presidential candidate.

Daniel Bensaïd was an embodiment of the French revolutionary tradition--one of his books published on the 200th anniversary of the 1789 French Revolution bore the title Moi la Révolution (I, the Revolution). He was fond of radicalized Jacobinism--the legacy of that revolution represented by Babeuf and Blanqui--which he combined with libertarian sympathies in reference to the 1871 Paris Commune. 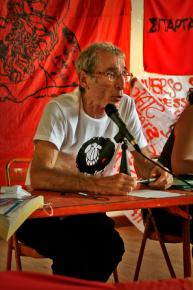 Yet he was deeply internationalist. He was especially involved in developments within the radical left in Latin America through the Fourth International, thanks to his command of Spanish and Portuguese. He saw in Russian Bolshevism the heir of radical Jacobinism and defended Lenin's legacy against the sweeping critical reassessments that followed the collapse of the Soviet Union.

He was also a fierce representative of this very specific feature of French radicalism: thorough secularism. Two of his latest books bore titles referring to this aspect of his thinking: Fragments mécréants (An Unbeliever's Discourse) and Eloge de la politique profane (In Praise of Secular Politics).

His most important theoretical work, Marx l'intempestif, was published in 1995. The book was translated into English and published in 2002 under the title A Marx for Our Times: Adventures and Misadventures of a Critique. It offered an unconventional reading of Marx, clearing him of the accusation of determinism. The book signaled Bensaïd's recognition as a public intellectual, a frequent author of op-eds in Le Monde and Libération, and a regular guest of intellectual radio and TV talk shows.

Bensaïd's first book was published in 1968, co-authored with Henri Weber (afterward a Socialist Party member of Senate). Its title, Mai 68, une répétition générale (May 68: A Dress Rehearsal), spoke volumes about the spirit of the times. After his book for the bicentennial of the French Revolution, he published works on Walter Benjamin and on the figure of Joan of Arc, the latter work influenced by Charles Péguy's interpretation.

He took up this seemingly eclectic range of topics in the context of the melancholy created by the post-1989 international political shift, with the ideological assault on Marxism and the triumphalism of the global neoliberal drive. One of Bensaïd's later books will indeed be titled Le Pari mélancolique (The Melancholic Wager).

Ever since he contracted AIDS, believing that his days were numbered, Bensaïd set out to write and publish at an impressive speed: close to 20 books of various sizes and on various topics in 15 years, from his 1995 book on Marx until his death.

At the same time, he confronted death most bravely: a revolutionary who fought steadfastly to his very last breath.