Yemen is suddenly on the front pages as an alleged base for "international terrorism." David Whitehouse provides the facts about a crisis the U.S. wants to exploit.

THE FAILED attempt to blow up a Detroit-bound airliner on Christmas Day--and the alleged connection of the attack to al-Qaeda militants in Yemen--has provided Barack Obama with a public excuse for a war that he has been fighting quietly until now.

In the name of fighting al-Qaeda, the U.S. has been arming and training the security forces of Yemen's perennial dictator, Ali Abdullah Saleh. Saleh is combating an armed insurgency in the North and secessionist movement in the South, aside from taking much smaller actions against al-Qaeda--a group with whom he had an informal truce until the last 18 months.

In the two-week period before the Christmas bombing attempt, the U.S. collaborated in two Yemeni assaults on alleged al-Qaeda targets that killed upwards of 150 people, according to local reports.

ABC News reported that the U.S. used Cruise missiles in support of the December 17 assault--although Yemen specialist Gregory Johnsen said that pictures of the wreckage looked more like the destruction typical of smaller missiles launched from unmanned drone aircraft. Yemen was the site of the first-ever U.S. drone attack--the assassination in 2002 of a suspect in the 2000 attack that killed 17 U.S. sailors on the U.S.S. Cole in the Yemeni port of Aden. 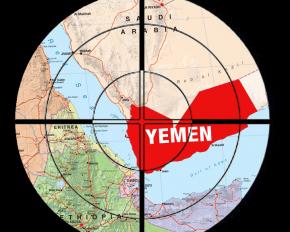 Saleh, originally an army field marshal, took power in North Yemen in 1978, back when the U.S. was supporting the North against the USSR-backed republic of South Yemen. He has often received help from the U.S. to hold power since, but "security assistance" to Yemen has jumped--from $4.6 million in 2006 to $70 million last year. The administration has announced that funding will more than double to $150 million in 2009.

As George W. Bush did in Afghanistan, Obama is using al-Qaeda as a pretext to extend the strategic reach of the United States.

Yemen sits at the south end of the Arabian Peninsula, with Saudi Arabia to the north. It is a portal for people and goods moving between East Africa and the Middle East.

Because the African country that sits across the Gulf of Aden from Yemen is Somalia--another place with a traditionally weak central state--the trade route through the Gulf is a favorite for smugglers of illicit goods, not to mention for pirates. Just as al-Qaeda presented an excuse for the United States to get a toehold in Yemen, the pirates off the Somali coast have provided the pretext for a heavy naval presence.

The crucial importance of Yemen to geopolitics is the Bab el-Mandeb strait at Yemen's southwest corner, a strategic chokepoint for ships--including oil tankers--passing from the Gulf of Aden to the Red Sea and Suez Canal to the north. The U.S. and France already control the African side of the strait with military bases in Djibouti.

Obama and David Petraeus, chief of the military's U.S. Central Command, declared on January 9 that the U.S. would not send ground troops to Yemen or Somalia, although sources such as the London Telegraph report that U.S. Special Forces troops are already in Yemen--and their presence in Somalia has been an open secret since Ethiopia invaded with U.S. help in late 2006.

THE STATED rationale for U.S. intervention is the growth of al-Qaeda in the Arabian Peninsula, a formation apparently created in January 2009 by al-Qaeda members consolidating their organization with militants in Yemen.

Specialists on the region and al-Qaeda agree that the core group in Yemen numbers somewhere between 100 and 200. But militant Salafism--the fundamentalist trend in Sunni Islam that includes al-Qaeda--is a broader force in Yemen. Stephen Zunes reported in Foreign Policy in Focus that roughly 2,000 Yemeni militants have experience fighting in Iraq.

Other veteran Arab members of al-Qaeda have moved from Pakistan's tribal areas to Yemen in the past year, according to CBS News and other sources. The numbers involved are vague, but the movement attests to an operational connection between al-Qaeda's leadership in South Asia and at least the core members in Yemen.

But a hundred-odd militants in a country of 22 million is not enough to push Yemen into crisis. The real crises in Yemen are economic and political.

Yemen is the poorest country in the Arabian Peninsula, with a per capita income of $600. Seventy percent of the government's revenue comes from oil sales, but the depletion of reserves--and the worldwide economic crisis--caused a 40 percent drop in oil revenues last year, to $3.3 billion, according to the Yemen Times. Saleh has regularly used government revenue as a means to bribe potentially rebellious forces, but the disappearance of oil money is damaging his ability to purchase allies and buy peace.

In August, the Saleh government launched its sixth round of warfare against an armed movement grouped around the Houthi family of the minority Zaydi Shi'a sect, which makes up about one-third of Yemen's population. The conflict began in 2004 around the arrest of a Houthi member of parliament and his death at the hands of security forces later in the year.

The Zaydis complain of religious discrimination and of being shut out of economic and political power by the Saleh administration. Even though the Zaydis practice a distinct local form of Shi'ism, Saleh has accused them of acting as a proxy force for Iran. The claim, unsupported outside of government circles, is calculated to draw in the support of Saudi Arabia, whose rulers fear the prospect of an Iranian-backed Shia rebellion on their side of the border, where Shias are persecuted. Saudi Arabia openly entered the war in November with bombing raids against Houthi strongholds.

The insurgency began in 2004 with only a few thousand supporters, but it has grown to include some 100,000 militants because of the government's brutal response, which includes "the destruction of entire villages and infrastructure by army shelling, air bombardment and indiscriminate military and police violence," according to the International Crisis Group. As it has expanded, the insurgency has taken up a wider range of regional and tribal grievances.

When the U.S. signs on to supporting Yemeni security forces, it is taking sides in an ongoing civil conflict, just as it did in Iraq and Afghanistan--with the same prospects that grievances and resentment will multiply as the U.S. supplies heavier firepower to the dictatorship.

THE MAJOR challenge to the Saleh regime, however, comes from a broad-based movement in the South.

Following the withdrawal of Soviet support for South Yemen in 1989, the U.S.-backed Northern government took charge upon unification in 1990. An election in 1993 divided along regional lines, and conflicts within a north-south coalition government broke into civil war in 1994--which Saleh won.

Southerners say "economic patronage and oil-based development has bypassed them in favor of northerners," according to Human Rights Watch (HRW). Chief among the grievances was that Southern soldiers and civil servants were forcibly retired with cuts in their pensions. Protests by military officers in 2007 spread to lawyers, academics, students and journalists, and finally to sheikhs and ordinary rural residents--drawing support from all the major southern parties, according to HRW.

The government shut down nine Southern newspapers in 2009, accusing them of promoting separatism. Reporters without Borders now ranks Yemen government as the world's seventh most repressive when it comes to press freedom.

Demonstrations in the South reached into the tens of thousands this year, and the Southern Movement began to shift its demands from an end to corruption and a larger share of oil revenues to outright secession.

Early in the year, a key southern ally of Saleh--the Salafist Tariq al-Fadhli, who has supported Saleh since the civil war of 1994--threw his support to the Southern Movement. Saleh promptly accused of al-Fadhli of connections to al-Qaeda, a claim that al-Fadhli denied.

Saleh's motivation for tying al-Qaeda to the Southern Movement was the same one he had for fabricating an Iranian connection to the northern revolt--to provide cover for another country, in this case the U.S., to get involved.

The Southern Movement threatens U.S. interests as well as Saleh's. All of the major deposits of oil and gas that provide a majority of the government's revenue are located in regions that once belonged to South Yemen. The secessionist Southern Movement thus threatens to take effective control of the country out of the hands of a U.S. ally and give it to a Southern elite that has historic connections to Russia and China.

If Yemen were re-divided along its pre-1990 lines--which date back to a division between the Ottoman and British empires--South Yemen would be the stronger state, and would include a shoreline that overlooks the strategic strait of Bab el-Mandeb.

The former colonial masters of southern Yemen, the British, have called a conference for foreign supporters of Saleh's regime to gather on January 28.

Attendees will no doubt dress up their deliberations with references to the threat of international terrorism. They will also claim that "development aid" is just as important as military aid for getting at the roots of terrorism.

But as Clive Jones, a British Yemen specialist, told the Christian Science Monitor, "To put it bluntly, this is a process of bribery. The idea of passing on government money to tribal leaders, for ostensibly developmental purposes, is part and parcel of the British lineage in Yemen."

The upshot is that that the U.S. is buying itself into deeper support for yet another dictatorship, pursuing global strategic advantage under the cover of fighting terrorism. Bush's global war continues--and spreads--under a new commander-in-chief.