How did this guy win?

Scott Brown, a nearly unknown Republican a few weeks ago, won a comfortable victory over Democrats in the special election for U.S. senator in liberal Massachusetts.

IT WAS pretty clear that Martha Coakley's goose was cooked before the polls closed yesterday in the Massachusetts election to fill Ted Kennedy's seat in the U.S. Senate.

First, only the Democratic candidate's advisers were claiming that their "internal polls" showed Coakley ahead--most major public polls showed her losing to formerly unknown Republican Scott Brown by anywhere from five to nine percentage points. Second, her campaign announced a possible challenge to the results on the grounds of nebulous charges of voter fraud.

And third, Democrats--from the state level to the White House--started blaming each other for what happened. If nothing else, you knew these were signals of a campaign that thought it was going to lose.

And lose it did, with Brown--who vows to be the "41st vote" to uphold Republican filibusters to defeat health care reform legislation being considered in Congress--beating Coakley by a margin of 52 percent to 47 percent.

How, in a state that hadn't sent a Republican to the U.S. Senate since 1972, could a third-rate Republican state senator defeat the supposedly popular Democratic state attorney general? How could one of the "bluest" (most pro-Democratic) electorates in the country replace Ted Kennedy--who often called health care reform "the cause of my life"--with a conservative Republican whose main program is to defeat health care reform?

True, Coakley ran a lousy campaign. She was a terrible candidate who gave off the aura that she was simply entitled to take over the seat left vacant when Kennedy died. At a time when ordinary Americans are fed up with politicians and business leaders who act as if it's "business as usual" while ordinary people are hurting, this was a kiss of death.

All Brown had to do was to call out Coakley, insisting that he was running for the "people's' seat," in order to tap into the electorate's anger at out-of-touch politicians.

But it's too easy to put the blame on Coakley--which is exactly what the Obama White House and its supporters are trying to do with their post-election spin.

After all, Brown ran chiefly on a national issue--defeating health care reform--aimed right at the heart of the agenda that Barack Obama and the Democrats have championed for most of the last year. If the health care legislation that Congress looked likely to pass until Tuesday was at all popular, Coakley would have won in a walk. 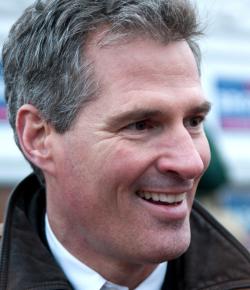 But the health care proposals pushed by the Democratic Congress have become increasingly unpopular as the year has gone on. Incredibly, an issue that Democrats should have been able to use to defeat conservative Republicans for a generation to come has become a political albatross around their necks.

Why? Because the Obama administration turned the legislation into a corporate welfare scheme for the insurance companies, one of the most reviled industries in the country. As Robert Kuttner, editor of the liberal American Prospect, wrote:

By embracing a deal that required the government to come up with a trillion dollars of subsidy for the insurance industry, Obama was forced to pursue policies that were justifiably unpopular--such as taxing premiums of people with decent insurance, or compelling people to buy policies that they often couldn't afford, or diverting money from Medicare. He managed to scare silly the single-most satisfied clientele of our one island of efficient single-payer health insurance--senior citizens--and to alienate one of his most loyal constituencies, trade unionists.

The bill helped about two-thirds of America's uninsured, but did almost nothing for the 85 percent of Americans with insurance that is becoming more costly and unreliable by the day--except frighten them into believing that what little they have is at increased risk of being taken away.

This has made it easy for Republicans to oppose the bill without even having to pay a political price for fronting for the current dysfunctional system.

REPUBLICANS WILL also claim that the election result in Massachusetts represented a repudiation of the "liberal agenda," "big government," the "Washington elite" and the like. And as surely as day follows night, the clamor of Beltway pundits and conservatives urging Obama and the Democrats to "move to the center" (i.e. to the right) will grow deafening.

The idea that Obama was even pursuing a liberal agenda will come as news to millions of his supporters who have become increasingly demoralized with an administration that seems more interested in helping out Wall Street bankers than "Main Street" Americans losing their jobs and houses.

A September 2009 Economic Policy Institute poll asked a national sample of registered voters to say who they thought had "been helped a lot or some" from the policies the administration enacted. The result: 13 percent said the "average working person," 64 percent identified "large banks," and 54 percent said "Wall Street investment companies."

Democratic consultant Celinda Lake, who did polling for the Coakley campaign, found an even more amazing result in Massachusetts. As she told the Huffington Post:

On the eve of the election, Martha Coakley had a 21-point advantage over Scott Brown on who would fight Wall Street and deliver for Main Street. But it didn't predict to the vote, because voters thought, even if they sent her down here, it wouldn't happen. Fine, she had done it in Massachusetts, but no one was doing it in Washington...

2010 is fast turning out to be a blame election, and I think that either we're going to characterize who deserves the blame--whether that's banks and lobbyists and people who still want to hold on to national Republican economic strategies--or we're going to get the blame. And that's a very different tone than, often, the administration is comfortable with.

If Americans are repudiating "big government," it's because they see the government helping Wall Street, rather than working people--hardly an endorsement of Republican trickle-down economics.

But if Democrats are the party in power and seen as fronting for Wall Street or the insurance cartel, an angry electorate looking for some bums to throw out of office will toss the Democrats. And as long as there's no credible third party alternative from the left, the Republicans and the right will benefit from Democratic losses.