The siege of Haiti

Rachel Cohen and Alan Maass explain that the U.S. government's callous attitude toward Haitians desperate to flee the disaster is part of a longstanding history.

THE RING of mighty warships off the coast of Port-au-Prince is a stark symbol of the true intentions of the U.S. government in its "humanitarian" mission following Haiti's devastating earthquake.

The Navy and Coast Guard vessels aren't there with food or water or rescue teams. They're on patrol to make sure that Haitians don't escape the disaster and try to get to the United States.

A week and a half after the earthquake hit--with hundreds of thousands dead and as many as 3 million made homeless--even mainstream news reports admit that relief efforts organized by the U.S. aren't getting food and water to many people.

At the main airport in Port-au-Prince, now under U.S. command, American military flights get priority over all others--including planes loaded with humanitarian supplies that have been diverted to the Dominican Republic. International aid workers say that U.S. personnel refuse to allow convoys to leave the airport to distribute supplies without a heavily armed troop escort.

And in the waters off Haiti's coast, U.S. ships are preparing to stop Haitians if they try to flee in whatever boats they can find on a desperate voyage to the U.S. hundreds of miles away. 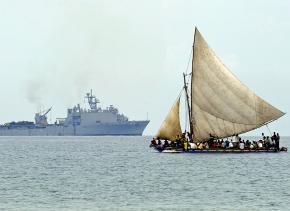 The U.S. government's message to Haitians: Stay and suffer--because you're not welcome in the "land of the free."

To underline the point, a U.S. Air Force transport plane spends hours in the air above Haiti every day, not ferrying food and water, but broadcasting a radio statement in Creole from Haiti's ambassador to the U.S., Raymond Joseph. "I'll be honest with you," Joseph says, according to a transcript on the State Department's Web site. "If you think you will reach the U.S. and all the doors will be wide open to you, that's not at all the case. And they will intercept you right on the water, and send you back home where you came from."

State Department deputy spokesman Gordon Duguid had the gall to claim that the broadcasts were "part of the U.S. effort to help keep Haitians safe." In reality, they are a threat--aimed at enforcing the U.S. government's stay-out policy toward refugees from Haiti.

There have been Haitian "boat people" many times before, fleeing political repression or economic destitution or both, and the U.S. government spared no expense to round them up, hold them in prison facilities and send them back to Haiti. This time, the U.S. hopes to use its military presence on a "humanitarian" mission to stop Haitians before they start out.

U.S. military officials claim they haven't stopped any vessels fleeing Haiti. But a report in Britain's Sun newspaper described the thwarted beginnings of one attempt to leave. When rumors spread that a car ferry anchored offshore was about to sail, a number of small boats surrounded it, and survivors tried to scramble on board. The ferry wasn't sailing after all--"We have no fuel," its owners said.

But the U.S. knows Haitians will keep trying. Officials from the Department of Homeland Security told reporters that they transferred 200 undocumented immigrants from the Krome Service Processing Center--the federal immigration jail in Miami--to make room for a possible influx from Haiti.

THE ATTITUDE toward Haitians trying to flee the disaster belies the claims of the Obama administration and other U.S. officials that they care about helping the victims of the earthquake.

According to the New York Times, as of Tuesday, U.S. customs officials had allowed "a total of 23 Haitians into the United States on humanitarian grounds for medical treatment."

Dr. William O'Neill, dean of the medical school at the University of Miami--which set up a field hospital in Haiti near the airport--said that the State Department had denied visas to many seriously injured people to be transported to Miami for surgery and treatment. "It's beyond insane," O'Neill told the Times. "It's bureaucracy at its worse."

Early on in the crisis, Homeland Security Secretary Janet Napolitano did announce a temporary reprieve for Haitian immigrants currently in the U.S.--an extension of "temporary protected status" for 18 months.

The order will delay progress in the cases of 30,000 Haitians in some phase of the deportation process, many of them held in immigration detention centers scattered around the country. For others, January 21 marked the first day to begin filing for temporary status changes. Immigration officials expect about 100,000 to 200,000 applications, despite fees totaling $470 to complete the process.

For Haitians hoping to flee the current disaster, however, Napolitano explicitly ruled out a welcome in the U.S. "At this moment of tragedy in Haiti," she lectured, "it is tempting for people suffering in the aftermath of the earthquake to seek refuge elsewhere, but attempting to leave Haiti now will only bring more hardship to the Haitian people and nation."

At first glance, there seemed to be one exception to Napolitano's cold-hearted attitude--orphaned children. CNN reported excitedly on Wednesday that "[m]ore than 50 Haitian children--rescued from an orphanage damaged by last week's earthquake-arrived Tuesday in Pennsylvania, most of them headed eventually to adoptive homes."

But the Obama administration's ban on Haitians entering the U.S. even applies to children whose parents died in the earthquake.

Haitian children who were already being adopted by U.S. residents prior to the earthquake will get speedy processing, according to Napolitano, and those identified as orphans eligible for international adoption before January 12 will be considered for "humanitarian parole."

But children whose parents died in the earthquake are explicitly denied "parole" from U.S.-occupied Port-au-Prince.

The U.S. government worked hand-in-glove with two dictators who ruled Haiti for three decades, starting in the mid-1950s--François Duvalier and his son Jean-Claude Duvalier, known as Papa Doc and Baby Doc.

Baby Doc Duvalier especially served as a tool of American business interests. In the 1970s, his regime lowered import tariffs, giving U.S. government-subsidized agribusiness the opportunity to flood the country with rice and sugar--Haiti's former chief exports--at prices local growers couldn't match. Haiti's agricultural sector was wiped out, and the desperate rural population descended on the slums of Port-au-Prince and other cities, where some found jobs at poverty wages in sweatshops set up by U.S. corporations, working in collaboration with the dictatorship.

So the poverty that Haitians fled in improvised boats and rafts with the hope of reaching the U.S. was a direct result of the schemes of American big business.

A popular revolt swept Baby Doc from power in 1986, and Haitians elected Jean-Bertrand Aristide, formerly a radical Catholic priest, in Haiti's first-ever democratic election. Just nine months after he took office, a CIA-backed coup in September 1991 ousted Aristide. The coup regime carried out brutal repression to punish the population that had toppled the Duvalier dictatorship--leading to an exodus to the U.S.

As Helen Scott explained in the International Socialist Review:

[Though] the U.S. largely orchestrated the coup, it adamantly denied responsibility for the ensuing suffering. During the coup's reign of terror in 1991, 38,000 Haitians fled and sought refuge in the United States. Of those, less than 5 percent received asylum and the rest were repatriated or held in prison camps at Guantánamo Bay.

Even more criminally, U.S. agencies actually gave names and addresses to coup leaders of some of those who had attempted to flee, guaranteeing arrest, torture and execution for unknown numbers.

During the 1992 presidential campaign, the Democratic candidate, Bill Clinton, criticized George Bush Sr. for turning Haitian refugees away from the U.S. But after he won the White House, Clinton continued the same policy of "running an extra-legal detention camp" for Haitians at Guantánamo, as investigative journalist James Ridgeway wrote. Conditions were especially dire for a group of about 150 refugees infected with HIV.

By 1994, a renewed wave of mass opposition to the coup regime combined with a continued migration of Haitians fleeing the fighting led Clinton to order 20,000 troops to Haiti to restore Aristide to power. "Operation Restore Democracy" was cloaked in the rhetoric of a "humanitarian" intervention. But the effect wasn't humanitarian, nor was it about "restoring democracy"--to regain office, Aristide agreed to enact pro-free market reforms that only deepened Haiti's poverty and inequality.

During the invasion, the Guantánamo Bay prison camp again swelled with tens of thousands of Haitian refugees--the total reached a high point of 45,000 before the Haitians were deported in 1995 and 1996 to a country that was supposedly stabilized.

A decade later, Haiti was again the target of the U.S. government under George Bush Jr. In 2004, the country's right wing organized a coup against Aristide, with the participation of U.S. forces, which guarded the deposed president as he was transported into exile on a U.S. aircraft. In keeping with the fashion in the wake of U.S.-backed coups, Bush continued to deny "temporary protected status" to Haitians throughout his presidency.

The treatment of undocumented Haitian immigrants has been appalling. Edwidge Danticat, the celebrated Haitian novelist, described the fate of her uncle, who tried to emigrate to the U.S. in 2004, to Amy Goodman of Democracy Now!:

He came to Miami, where I live, and he requested temporary asylum. He was arrested and brought to jail at the Krome Detention Center. He was 81 years old, a cancer survivor who spoke with a voice box. And his medications were taken away. He died a few days later in the custody of the immigration service.

The outpouring of concern and solidarity from ordinary people in the U.S. and around the world in the wake of Haiti's earthquake stands in stark contrast to the cold-hearted attitude of the U.S. government toward any Haitian who wants to flee the desperate economic and political conditions that the U.S. helped to create.

Haitians deserve more than refuge in the U.S. At the very least, those who wish to travel to the U.S. should be granted full amnesty. Beyond this, the U.S. government owes huge reparations for just the last few decades of imperialist plunder.

Only the Haitian people have the right to decide how their country will recover from this natural disaster. They deserve the right to determine the course of their recovery from generations of imperialism as well.