Barack Obama insisted in an interview that he's a "fierce advocate" of the free market--and Alan Maass says there's no reason not to take him at his word.

It's hard not to feel sympathy for the victim of such an irony, for sure.

But then again, Obama showed which of the two supposed misunderstandings he really wanted to clear up--by spending the rest of the interview pledging his devotion to corporations and capitalism.

"You would be hard-pressed to identify a piece of legislation that we have proposed out there that, net, is not good for businesses," Obama insisted. "We are pro-growth. We are fierce advocates for a thriving, dynamic free market."

Any liberals who believed--on scant evidence--that Obama and his administration had reacted to the Republican victory in the special Senate election in Massachusetts last month by "going populist" were sorely disappointed. 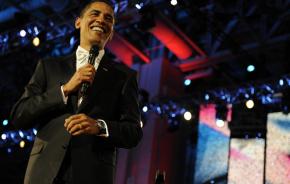 "I know both those guys," Obama replied. "They are very savvy businessmen. And I, like most of the American people, don't begrudge people success or wealth. That is part of the free-market system."

Even BusinessWeek seemed taken aback that Obama didn't think ordinary people would hold at least a few grudges toward two men who relied on taxpayers to rescue their businesses--and then paid themselves many times more for the year than most taxpayers will earn in a lifetime of work.

"Seventeen million is a lot for Main Street to stomach," BusinessWeek pressed. Obama replied by jumping on the sports radio bandwagon of bashing star athletes for their high salaries: "Listen, $17 million is an extraordinary amount of money. Of course, there are some baseball players who are making more than that and don't get to the World Series either, so I am shocked by that as well."

Then there was Obama's tribute to union-busting. When his interviewers asked him for an example of a CEO that he admired, Obama's answer was...Frederick Smith of FedEx, a devoted Republican who was in the running to be John McCain's running mate in 2008 and who has ruthlessly fought each and every attempt by unions to organize at his company.

Recently, as John Judis pointed out at the New Republic, Smith tried to blackmail the U.S. government--by threatening to cancel a multimillion-dollar order for new Boeing aircraft if Congress dared to pass a law that would have put FedEx under the jurisdiction of the National Labor Relations Act, thus giving labor a fairer chance at unionizing the shipping giant.

CONSIDERING THE record of his first year in office, it's hard to believe anyone really considers Barack Obama "anti-business."

His administration picked up the Wall Street bailout where George Bush's left off, putting the federal government on the hook for trillions of dollars. Treasury Secretary Tim Geithner has done everything the banksters could have wished for, including helping to cover up some of the biggest scandals of the bailout. The administration squashed a not-very-determined rebellion by a few Senate Democrats and rammed through the reappointment of Ben Bernanke as head of the Federal Reserve. Even the energy bosses--favorites of the Bush administration--have to be happy with Obama's fronting for nuclear power and the clean coal madness.

The scene-setting introduction to Bloomberg BusinessWeek's interview with Obama provided yet more evidence of the administration's connections to corporate power: As the president was being interviewed in the Oval Office, the magazine reported, "a number of CEOs sat outside in the West Wing lobby: General Electric Co.'s Jeffrey Immelt and Honeywell International Inc.'s David Cote were among those waiting for a meeting with White House Chief of Staff Rahm Emanuel and energy coordinator Carol Browner to discuss climate-change policy."

Of course, that doesn't mean Wall Street and the Republicans will stop complaining about Obama's allegedly socialist policies. Since they win new concessions from the White House every time they open their mouths, they'd be fools to do otherwise.

As Glenn Greenwald wrote on Salon.com, the media portrayal of Obama as hostile to Wall Street is completely misplaced:

Wall Street executives and their lobbyists have virtually unfettered access to the administration and to the president himself. You would think they'd be satisfied with the state of affairs in Washington. Yet so extreme are their perceived entitlements of control that even mere symbolic and rhetorical disobedience from the politicians they own--he said some mean things about us--creates a sense of righteous grievance: Our government employees do not behave this way toward us and will be punished if it continues.

That's all true. But the other purpose of the drumbeat of complaints about Obama from Corporate America is to keep the administration boxed in--kept on notice that its tame criticisms of greed and recklessness on Wall Street better not become more heated, much less be translated into policies that would affect the bottom line in any significant way.

Obama's Bloomberg BusinessWeek interview was the administration's reply to the corporations: You have nothing to worry about.

At the least, it should prove that Obama's occasional references to "fat cat bankers" and a fight against Wall Street that "I'm ready to have" are nothing more than empty rhetoric.

AMONG OBAMA'S liberal supporters, the Bloomberg BusinessWeek interview was met with anger and frustration. "How is it possible, at this late date, for Obama to be so clueless?" fumed New York Times columnist Paul Krugman.

But many of these commentators tended to judge Obama by the standards of political spin--to see Obama's words as bad messaging because it put him on the wrong side of popular anger against Wall Street.

For example, John Judis did a great job of dismantling Obama's defense of bankers' bonuses and tribute to Frederick Smith--but concluded with the suggestion that "a few sharp points about injustice...would have helped to allay public fears that Obama isn't really on their side."

This begs the question: Is Obama really on the side of working people, and just isn't communicating that effectively? Or do his words to BusinessWeek reflect what he actually believes?

To the millions of people who voted for him, Obama the candidate did seem to be someone on the side of ordinary people, committed to changing the direction of U.S. politics. Moreover, the scale of the economic crisis seemed like it would force the next president to act aggressively toward Wall Street--at least imposing tough regulations, if not nationalizing parts of the financial system.

Still, there were signals of a different Obama, even at the height of the campaign--moments when he revealed that he wasn't even that liberal, but came squarely from the mainstream of a party attempting to occupy the center of the political spectrum in the U.S.

For example, when the primary battle between Obama and Hillary Clinton moved to Nevada in mid-January 2008, Obama met with a Reno newspaper editorial board and essentially embraced the legacy of Ronald Reagan.

According to Obama, Reagan "changed the trajectory of America in a way that Richard Nixon did not, and in a way that Bill Clinton did not. He put us on a fundamentally different path, because the country was ready for it. I think they felt like with all the excesses of the 1960s and 1970s, government had grown and grown, but there wasn't much sense of accountability in terms of how it was operating."

As SocialistWorker.org wrote at the time:

None of the bozos running for the Republican presidential nomination--each one professing their devotion to Reagan's discredited "trickle-down economics" doctrine of the beneficial effects of tax cuts for the super-rich--would put it much differently.

This is the real content of Obama's rhetoric about ending "partisan divisions" in Washington--concessions to the pro-free market and anti-"big government" ideology that came to dominate during the period of conservative dominance inaugurated by Reagan's presidency.

There were other examples. As the primaries approached in the Midwestern states of Ohio and Pennsylvania, both Obama and Clinton suddenly discovered their long-held frustration with the North American Free Trade Agreement, and their determination to renegotiate it. But while the anti-free trade rhetoric flew at the candidates' debates, Obama's economic adviser Austan Goolsbee was meeting with Canadian government officials to assure them that the campaign's anti-NAFTA rhetoric "should be viewed as more political positioning than a clear articulation of policy plans."

Obama's labor and liberal supporters explained away these panders to big business and conservatives as the kind of thing that any politician "has to do" to get elected. But this turned out to be much closer to the "real" Obama than the exciting rally speaker who promised change.

In reality, Obama was also running in a second, hidden campaign to win the "money election" and the support of the U.S. business elite. He won that one, too--long before the vote that made him president. According to a report by the Center for Responsive Politics, at the same time as Obama was paying tribute to Ronald Reagan, he and Hillary Clinton were each raking in twice as much as John McCain in corporate donations from industries that traditionally gave more to Republicans than Democrats.

Anyone who hoped Obama would carry out an agenda that put workers ahead of corporations has a year of evidence showing the opposite. There's no reason not to take him at his word when he insists that he's a "fierce advocate for a thriving, dynamic free market."

Like any politician, Obama will always respond to the relentless pressure from above--from the U.S. business and political elite--unless he faces pressure mobilized from grassroots struggles below.