Building blocks of a new movement

There are no shortcuts to building a social movement. But every protest, sit-in, picket line and occupation can contribute to that process.

THE PROTESTS against the suffering caused by California's budget cutbacks planned for March 4 are an important milestone in efforts to resist the impact of the economic crisis in that state--and across the country. The question now is how to build on that resistance and expand on it.

The struggle so far in California provides important lessons for activists everywhere. It began when scattered actions against budget cuts by students at a few campuses converged with the fight of a relatively small union, the University Professional and Technical Employees. The union's one-day strike became a rallying point for students and faculty in the state's main university system last September.

There was nothing automatic about the spread of the movement, however. It has taken months of meetings, debate and diligent organizing to expand the base of activists. Throughout the fall, university students provided much of the energy for the movement with ongoing protests and a series of building occupations. 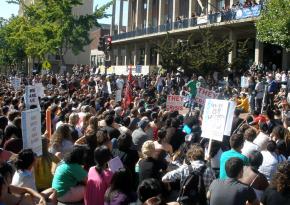 These actions helped spur the big public-sector unions representing teachers and other government employees into backing the March 4 statewide day of action to defend public education from further cuts pushed by Gov. Arnold Schwarzenegger. Actions will include rallies, protests, walkouts and job actions.

This dynamic needs to be recreated in states and cities across the U.S. California, of course, isn't alone. The budget crisis of every state is set to worsen as tax receipts dry up as a result of recession, high unemployment and home foreclosures. Nevada, for example, faces a gap of 33 percent for its next budget year, and Arizona is close behind at 30 percent. Illinois' projected 2010 budget shortfall of $11 billion is proportionately nearly as bad as California's.

According to Arturo Pérez of the National Conference of State Legislatures, "It's the worst situation states have faced in decades, perhaps going as far back as the Great Depression in some states."

Compounding the misery is the failure of President Barack Obama's stimulus package to provide more assistance to the states. According to the Economic Policy Institute, the Obama program provided some $68 billion in aid to the states to help close budget gaps for fiscal year 2010--but the total shortfall was $156 billion.

GIVEN THIS onslaught, the question now is: How can the struggle move forward, both in California and beyond?

To begin to formulate an answer, it's helpful to both draw upon historical experiences and develop a political perspective about today's crisis.

The first point is that while the recession is probably over by official measures, the effects of the crisis will linger for years in the form of high unemployment and cuts in social spending, whether for local schools, libraries and parks, or Social Security and Medicare.

Wall Street, after getting Congress, the Federal Reserve and the White House to put up to $13 trillion in government money at its disposal, is now demanding "fiscal responsibility." And Obama has already obliged by ordering a three-year freeze in discretionary federal spending other than national security.

So while bankers rake in multimillion-dollar bonuses thanks to taxpayer dollars, the rest of us are supposed to accept permanent austerity. That means the cuts will keep coming--and working people will experience the brunt of these cuts.

Given the weakness of the social movements, labor unions and the left, these attacks may seem unstoppable. But that's why a historical framework is so important. There have been many times in U.S. history when the forces of social progress faced seemingly impossible odds, only to surge forward.

For today's activists, one period is especially relevant: the 1930s.

After the financial crash of 1929 and the Great Depression that followed, the U.S. labor movement was at a low ebb. Many unions had all but ceased to function because of mass unemployment and union-busting employers, and the most important sections of industry--the auto, steel and rubber plants--remained unorganized.

For the first four years of that terrible crisis, strikes and protests were few. But then in 1934, a series of labor battles electrified the country. General strikes in Toledo, Minneapolis and San Francisco all ended with gains for workers and set the stage for a wave of sit-down strikes in the auto and rubber plants a couple of years later.

The revolt seemed to come out of nowhere. In fact, there had been radicals, communists and socialists working for years to prepare the ground for the fightback. It was these militants--frequently young people--who took up the challenge to organize the unorganized when the big unions were unwilling or unable to do so.

There were other small victories in the most difficult years, too--from successful efforts to resist evictions to groups of the unemployed who, in the days before federal welfare, were able to win some public aid from city and county governments.

Those smaller struggles knitted together the movements, political parties and union organizers who would go on to play a leading role in the mass movements. There was nothing inevitable about this, of course. It took both politics and perseverance to weather the ups and downs of the smaller struggles and build a left that could take on much greater battles--and in so doing have a profound impact on U.S. society.

This pressure from below drove President Franklin Roosevelt to undertake the big social reforms that have endured to this day--from the federal guarantee of workers' right to organize to the creation of Social Security.

Roosevelt took office as a conventional politician, committed to balancing the budget. His first legislative initiatives were concerned not with alleviating Depression conditions for U.S. workers, but bailing out big business through the creation of cartels.

It was only when confronted with the prospect of a social rebellion that Roosevelt stood up to the obstructionists among capitalists and the Republican Party--not because he himself was a radical, but because he concluded that such measures were needed to shore up a discredited U.S. capitalism.

THE ANALOGIES to today are clear enough. Once again, a weak left faces painstaking efforts to build its capacity to resist and fight in the middle of an economic downturn that has put workers on the defensive. And given the left's small forces, a well-funded right wing has been able to posture as populists as they criticize the Obama administration for doing business' bidding.

Which brings us back to March 4. Big, coordinated protests against budget cuts in the country's largest state can help raise the profile of the left and send a message that there's an active movement fighting the austerity being pushed from Washington to City Hall. Around the country, opponents of austerity and budget cuts have adopted March 4 to rally their own forces.

These protests, by themselves, won't be enough to stop the cuts, in California or anywhere else. But they can consolidate and strengthen the movement--and set an example for more people to join the fight.

There are no shortcuts to building the kind of social movements, unions and a left that will be equal to the tasks facing us today. But every protest, sit-in, picket line and occupation can contribute to rebuilding that left.