Women trapped in the American gulag

Lee Wengraf reviews a new book of writing by and about the women who make up part of the 2.3 million people stuck in American prisons today.

INTERRUPTED LIFE: Experiences of Incarcerated Women in the United States is an important new collection of essays, poetry and research studies chronicling women's experiences behind bars, giving voice to struggles against daily injustices and the prison system as whole.

Although men make up over 90 percent of the 2.3 million residents of the American gulag, the number of women in prison is growing at a rate double that of men. Since 1977, the number of incarcerated women has increased by over 700 percent. Interrupted Life is a powerful indictment of the crisis faced by an exploding number of women behind bars in this country.

Contributors to Interrupted Life paint the backdrop to the massive expansion in the U.S. prison system over the past four decades. Mandatory drug sentencing passed in the 1970s fueled the increase, further escalated with economic restructuring and the war on the poor.

As activist Julia Sudbury outlines in her essay, "Unpacking the Crisis," Reaganomics ushered in increased spending on prisons and the military, and cuts to social programs. "With social expenditure decreasing, criminalization has become the primary response to growing poverty," she writes. "Women's poverty is criminalized in numerous ways." 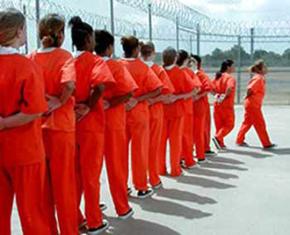 Under a vicious law-and-order agenda, a racist drug war swept huge numbers of people of color into prisons, men and women alike.

Harsh sentencing continued through the 1990s to the present day, even as crime rates began to fall: mandatory minimums for drugs and other crimes; "three strikes" life sentences with three felony convictions, greater use of the death penalty and life without parole; zero tolerance policies for juveniles, creating what one author calls a "school to prison pipeline, primarily for youth of color."

The gutting of mental health and addiction treatment programs turned prisons into warehouses. Meanwhile, the exploitation of prison labor rose alongside the destruction of prison education programs, aided by Clinton's Violent Crime Control and Law Enforcement Act of 1994, which essentially halted the flow of all federal funds to prison college education.

More than 300 college programs were shut down in mid-1990s. This new policy landscape amounted to a vicious circle for those most victimized in society, as the words of a prisoner named Solo eloquently expresses in one chapter:

The drug war and attacks on the poor have hit people of color especially hard. Today, nearly 70 percent of incarcerated women are African American or Latina. Compelling accounts in Interrupted Life show the lived experiences of women in the face of institutional racism, such as infamous racial disparity in crack-cocaine sentencing.

Although the majority of women are convicted of drug and of other nonviolent offenses, Interrupted Life provides space for the accounts of those serving time for violent crimes, including women on death row. Activist and former prisoner Kathy Boudin relates the story of Roslyn, sentenced to 50 years for a crime committed at age 17. Roslyn asks in a fictional letter to her sentencing judge:

Did you see no potential in me? You noted my high IQ, how "articulate" I was, how "mature"...But] then you sentenced me, said no hope for rehabilitation, said I'm as good as dead...You never gave me a chance, so I made my own. My poverty, skin color, background, past--who at age 17 can't change, won't grow? You robbed me of my youth, of my belief injustice. But from the graveyard, the barbed wire, the cinderblock, I'm resurrected. I'm worthy. I'm somebody.

As the collection shows, criminal justice policy doesn't begin to address the particular needs of women behind bars. The vast majority of incarcerated women are mothers. One essay, "Do I Have to Stand for This?" by Kimberly Burke, conveys the pain of long separations from their children.

"Out of Sight, NOT Out of Mind" outlines a parents' bill of rights, and another essay details the devastating impact of Clinton's Adoption and Safe Families Act (ASFA) of 1997, which has accelerated the termination of parental rights (TPR) of prisoners. Since ASFA, 93 percent of TPR cases filed have resulted in the incarcerated mothers losing their parental rights. A total of 7 million children, or 1 in 10, have parents in the criminal "justice" system.

As the book's section "Struggling for Health Care" details, incarcerated women face added oppression from poor prenatal and reproductive health care, shackled childbirth and the danger of forced sterilization. Women prisoners have higher rates of HIV and hepatitis C infection, double that of male prisoners and 100 times the rate of the general population.

For example, over 14 percent of New York's women prisoners are HIV positive, the highest rate in the nation. Close to 75 percent of women used drugs regularly before their arrest, and 90 percent report some physical or sexual abuse but face obstacles securing treatment on the inside or the outside. As the authors make clear, prison is the only solution on offer from policymakers for social problems faced by growing numbers of poor women.

FRAMING THE accounts of Interrupted Life is a broader discussion of the role of women in social justice movements and the relationship between reforms and prison abolition. The authors embrace attempts to balance a vision of abolition with "taking practical steps to oppose the prison-industrial complex."

Significantly, their opposition stands against sentencing for both men and women: "This feminist abolitionism...resists the antiviolence movement's tendency to assume that policing and prisons are an effective tool against male violence." As contributor Kay Whitlock puts it, isn't social change fundamentally about ending violence not only "perpetuated by individuals, but also public and private institutions?"

Activists and advocates recount efforts to win reforms behind bars, such as the Get on the Bus program enabling children to visit mothers at Chowchilla prison in California; the Bedford Hills College Bound program in New York State; the Longtimers/Insiders Activist group in Louisiana prison working with the Southern Center for Human Rights to challenge prisoner transfer out of state; the fight for a young mothers' bill of rights that won the right to childbirth and visitation with children unshackled; and the Campaign for Telephone Justice campaign of prisoner family members and advocates who successfully forced MCI to reduce exorbitant phone rates.

For many contributors in this volume, the experience of incarceration has transformed their political consciousness. A newfound awareness informs their actions on the outside, as they grapple with obstacles from finding a job to winning fundamental rights. This is no mean feat: for example, 17 states permanently ban those with drug convictions from receiving food stamps or welfare.

Racism and bias against hiring former prisoners is common, and most states deny those with felony convictions the right to vote, while in prison and sometimes many years after release. In this context, as contributors to Interrupted Life stress, political education and organizing becomes crucial.

Anne Fowell Stanford's essay on the women's writing program in Cook County Jail describes one woman's politicization: her "worst day in jail," the day she realized "this business of incarceration is a billion dollar industry...my sisters had nothing to do but what they were doing...not realizing that in a sense our lives are at stake, held hostage by the courts and by our ignorance."

Essays in The Fire Inside, a prison newspaper in California, describe the growing awareness of their labor exploitation: "Today's penitentiary is nothing more than a new millennium plantation and prison laborers are the new millennium slaves."

To add to the picture painted by Interrupted Lives, readers might benefit from picking up Resistance Behind Bars: The Struggles Of Incarcerated Women (PM Press, 2009) by Victoria Law. Resistance Behind Bars draws out in greater detail the history of women's activism behind bars, with a more direct look at collective action.

The prisoners' rights movement that began in the late 1960s built solidarity on both sides of the wall; much of its writing, however, has focused on men. Law fills out the gaps in this important history, recounting examples of collective organizing, from filing grievances and lawsuits to rebellions and sit-down protests.

Inarguably, women's experiences at the hands of the courts and the prison system subject them to harsh treatment, vicious oppression and untold violence. Interrupted Lives goes a long way toward giving voice to the realities of those experiences and the need for a thoroughgoing change and a stronger anti-prison movement to fight for it.