Eric Toussaint, president of the Committee for the Abolition of Third World Debt, looks at the values underpinning the free market system.

PRACTICALLY ALL political leaders--whether from the traditional left or the right, from the North or the South--have a quasi-religious faith in the free market, especially the financial markets. Or rather, they themselves are the high priests of this religion.

Every day in every country, anyone with a television or an Internet connection can attend mass and worship the market-god--in the form of stock exchange and financial market reports. The market-god sends his messages through television anchormen and financial editors of daily newspapers.

Today, this happens not only in Organization for Economic Cooperation and Development countries, but in most parts of the planet. Whether you are in Shangai or Dakar, Rio de Janeiro or Timbuktu, you can receive "market signals."

Everywhere, governments have privatized and created the illusion that the population will be able to participate directly in market rituals (by buying shares) and reap the benefits in accordance with how well one interprets signals sent by the market-god. In actual fact, the small part of the working population that has acquired shares has no say over market tendencies. 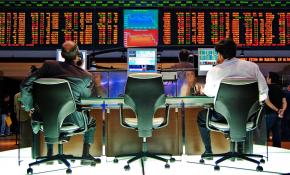 In a few centuries, the history books might say that from the 1980s onwards, a fetishist cult prospered. The dramatic rise of this cult will perhaps be associated with two heads of state, Margaret Thatcher and Ronald Reagan. It will be noted that, from the start, this cult had the backing of governments and powerful private financial interests. Indeed, for this cult to gain ground within the population, public and private media found it necessary to pay homage to it, day in and day out.

The gods of this religion are the financial markets. Its temples are known as stock exchanges. Only the high priests and their acolytes can tread their holy ground. The faithful are called upon to commune with their market-god on television, on their computer screen, in the daily papers, on the radio or at the bank.

Thanks to television, radio and the Internet, even in the most remote parts of the planet, hundreds of millions of people who are deprived of the right to meet their basic needs, are also urged to celebrate the market-god. In the North, in newspapers read by workers, housewives and unemployed, an "investment" section is published every day, even though the overwhelming majority of readers do not own a single share. Journalists are paid to help the faithful understand signals sent by the gods.

TO HEIGHTEN the power of the gods in the eyes of the faithful, commentators periodically declare that the gods have sent signals to governments to express their satisfaction or discontent.

The Greek government and parliament have at last understood the message sent by the gods and adopted a drastic austerity plan that has the lower classes paying the price. But the gods are dissatisfied with Spain, Portugal, Italy and Ireland. Their governments, too, will have to contribute their ritual offerings in the guise of strong antisocial measures.

The places where the gods are most likely to forcefully express their moods are Wall Street in New York, the City in London, and the Paris, Frankfurt and Tokyo stock exchanges. To gauge their moods, special indicators have been devised: the Dow Jones in New York, the Nikkei in Tokyo, the CAC40 in France, the Footsie in London, the Dax in Frankfort...

To appease the gods, governments must sacrifice the welfare state to the stock markets. They must also privatize public property.

Why are ordinary market operators given a religious aura? They are neither anonymous nor ethereal. They have names, addresses. They are the people in charge of the 200 biggest transnational corporations that control the world with the help of the G8, the G20 and institutions such as the International Monetary Fund, which came back into the limelight thanks to the financial crisis. Next, we have the World Bank and World Trade Organization, currently in a rather difficult predicament--but who knows, the gods might favor it again soon.

Governments are no strangers to this situation. From Reagan and Thatcher onward, they relinquished the means they had of controlling financial markets.

The situation is now almost reversed: Institutional investors (i.e., major banks, pension funds, insurance companies, hedge funds, etc.) received trillions of dollars from governments in the form of grants or loans to bail them out after the 2007-8 meltdown. The European Central Bank, the U.S. Federal Reserve, the Bank of England now lend them money on a daily basis at a lower rate than the capital inflation that institutional investors immediately use to speculate against the euro and against public money.

Money can cross borders without a single cent in taxes being levied. More than $3 trillion races around the planet every day. Less than 2 percent of this amount is linked to actual trade in goods and services or to productive investments. More than 98 percent is used for purely speculative operations, mainly on currencies, on commodities and on debt securities.

We have to put a stop to this death-breeding logic. We have to develop a new financial discipline, expropriate the financial sector and exert social democratic control on all financial matters, tax all institutional investors (which triggered and then profited from the crisis) heavily, audit and cancel public debts, implement a distributive tax reform, drastically reduce working hours so as to offer more jobs while maintaining wages at their current level...

In short, we must launch an anticapitalist project.