It’s not our deficit

Canadian socialists David Camfield and Daniel Serge look at one of the main arguments for "cutting deficits"--and explain why working people have to resist.

DEFICITS ARE the difference between what governments spend and what they take in. Governments often claim deficits are the fault of social spending that's too high. But in fact, deficits always grow when capitalist economic activity slows down or contracts, because tax revenue falls while state spending rises.

The global economic crisis that began in 2008 has caused deficits to grow. States have had to commit around $20 trillion to prevent a meltdown of the international banking system and "stimulate" the economy. This has staved off an economic collapse like the Great Depression of the 1930s, but it's led to big deficits and growing debt.

In the Canadian state, federal and provincial deficits have risen, but the federal deficit is, in fact, much smaller relative to the level of economic activity than in any other country of the G-7 (the U.S., the UK, France, Germany, Italy, Japan and Canada).

Aren't growing deficits a problem we all have to be concerned about?

No. Big deficits are a problem for the ruling class, but working people shouldn't shoulder any responsibility for solving their problem. 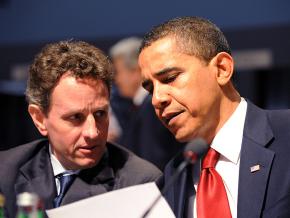 When a country's deficit is large, the cost of financing state debt by issuing bonds often goes up, since the government has to offer higher interest rates on bonds in order to attract buyers. Speculation on currency markets can also lead to a fall in the value of the country's currency.

Higher levels of inflation also allow less-competitive firms to take advantage of the fluctuating prices of inputs and outputs. These firms can then survive without investing in the newest technology and ways of organizing work.

These are problems for capitalists, governments and top civil servants trying to steer a country's economy on the stormy seas of global capitalism (an impossible challenge, since the global capitalist economy is beyond the ability of any state to control).

When ordinary people accept the idea that the deficit is our problem, too, it leads to support for the "solutions" proposed by capitalists and pro-capitalist political parties: cuts to spending on education, health care, social assistance and other government programs, along with privatization and higher college and university tuition and other user fees.

We've seen what this means: In the mid-1990s, the Liberal federal government headed by Jean Chretien cut 45,000 jobs, privatized CN Rail and Petro Canada, slashed funding to the provinces for social programs and weakened unemployment insurance, all in the name of lowering the deficit. If either Stephen Harper's Tories or Michael Ignatieff's Liberals had a majority government, we could well see another massive round of cuts. Some European governments are starting to implement big cuts in the name of deficit reduction.

Is the deficit just a scam?

Some on the left who rightly reject the idea that the deficit is everyone's problem and therefore spending cuts are needed, argue that the deficit isn't really a problem for anyone. They say deficit cutting is just a scam made up by right-wing ideologues to justify the harmful policies they want to inflict on us.

Is this true? Another way of putting it would be to ask does capitalism ever go into real crisis?

According to mainstream economists, the answer is No. Capitalism represents the purest expression of human nature--rational self-interest--and the market is a self-regulating mechanism to express it. When crises do occur, they're because of too much government interference--for instance, spending on social programs. Or they occur according to a natural business cycle that no one can really do anything about.

Further to the left, social democrats say that yes, capitalism does go into crisis and governments can have real problems paying off their debts. But it's not terminal: the supply and demand of labor and goods can be regulated by government spending. This is called Keynesianism, and right-wing governments across the world rediscovered Keynesianism in 2008, when the banks came begging, cap in hand. Give money to the banks, and they could write off all their bad loans; newly solvent again, they'd start lending money, which would kick-start the economy.

We know how this worked: financial institutions have returned to their predatory ways, there's been a fragile recovery, governments have spent all their rainy-day funds, and trillions of dollars of toxic debt are still being kicked around from lender to lender, waiting for someone to fumble.

Some left-wing Keynesians have said that the problem wasn't stimulus itself, but that it was given to the banks. Had it been given to green businesses, ethical investors and so on, it could have created a new, gentler capitalist economy.

The socialist perspective is different. Crisis is inherent in capitalism, because the system has to expand or die. It's not because governments interfere, don't interfere enough or interfere in the wrong ways. The problem lies in how production takes place in a capitalist society.

Every time a capitalist makes money, other capitalists rush into the same business to make money too. The technological changes associated with this process increase the amount of machinery involved--which lowers the amount of actual work, the source of value, going into production. Profits fall, and capitalists look to save money to stay afloat--both by attacking workers' wages directly, replacing more workers with machines (which only makes the problem worse) and finding cheaper workers elsewhere.

Finally, capitalists also pressure governments to reduce the "social wage": social programs, unemployment benefits and all the other things that allow workers to hold out for longer, before being forced to work for less.

The institutions repackaging debts into derivatives make this process worse: at every stage of new debts being created, the expectations of profits become higher. Meanwhile the actual prospects for profits become lower. Something has to burst.

Government stimulus can postpone that bubble, or make its explosion smaller. And indeed it has--hence larger deficits. These deficits are a result of capitalism's crisis.

What role do financial speculators play?

SPECULATORS ACTUALLY provide an essential service to capital, by advancing credit necessary to create new businesses before those businesses have a chance to turn a profit.

When speculators buy public bonds, which governments sell to raise funds to cover deficits, the speculators are shifting the burden of having to make a profit to governments. Speculators try to get returns on investments that are higher than what bonds pay now.

In effect, speculators tell governments "You have to create the conditions for profitability, by encouraging a 'friendly business environment.'" In a recession, that means lowering taxes on businesses, raising taxes on workers, weakening regulations that protect jobs, social services and the environment--and making sure the police and courts are ready to deal with any unrest this austerity provokes.

People opposed to the evils of financial speculation should demand new, democratic public financial institutions that invest in ways that are geared to meeting human needs, not to exceeding average profits.

Their problems and ours

DEFICITS ARE real. The crisis of state finances is genuine, because capitalist states have to do certain things to maintain capitalist rule: providing infrastructure, legal regulations, a police force that can control the population, military forces and so on. States also provide education, health care and other services that working people use. If the state stopped financing everything tomorrow, the result would be social collapse, not a utopia. So finding a way to finance some state activities is essential.

However, this does not mean that deficits are our problem. We should not accept the priorities of capitalist governments! If we demand that our governments refuse to make payments on their debts, it means telling governments to stop managing the affairs of capital and to stop meeting the profit expectations of speculators.

Naturally enough, capitalist governments will almost always refuse to do this. So fighting austerity inflicted on us in the name of deficit reduction poses the question: should public authorities serve the needs of capital or the vast majority?

It's all about priorities. A great deal of what states spend is, from the perspective of the working class, useless - just think of the military and 'national security' budget, interest payments to bond-holders and the many subsidies and bailouts to corporations. By fighting against austerity, we're also fighting for what we really do need.

Our problem is what capitalist governments do to try to deal with their problems. Layoffs and cuts to social programs and government services are the problem we should take seriously.

Our response to what governments and other public sector employers are doing in the name of cutting deficits and restraining costs should be inspired by how many workers in Greece have responded to the package of layoffs, cuts and tax increases that the social democratic Greek government has brought in: general strikes by public and private sector workers, marches, rallies and occupations of buildings.

Such a movement should not only oppose deficit reduction measures that hurt ordinary people. It should demand that the government repudiate the debt, impose controls on capital flows and nationalize the financial system, converting banks and other financial institutions into democratically-run public institutions (cutting out speculators in the process).

It is utterly irrational for people to suffer harm in the name of reducing deficits. This is one of the ways in which capitalism is irrational--just like famine in a world that produces more than enough food to feed everyone and the refusal of governments to take drastic action to reduce the carbon emissions that are causing the climate change crisis even though low-carbon transportation, heating and power-generating technologies exist.

Like famine and climate change, the demand that people sacrifice for the sake of deficit reduction is a good reason for people to reject capitalism and fight for a democratic reorganization of society geared to the needs of people, not profit.