ON APRIL 29, the Arizona legislature passed a law banning ethnic studies at all public and charter schools across the state. Although the law is specifically aimed at Mexican-American studies, the ban will also shut down African American and Native American programs.

The target of the Arizona legislature's ire is a 14-year-old Mexican-American studies program taught in Tucson's public schools. Only 3 percent of the district's 55,000 high school students are currently enrolled in the program, which focuses on history and culture. Yet Arizona's politicians have depicted it as a hotbed of racial hostility that poses a clear threat to Arizona's white citizenry.

Arizona Gov. Jan Brewer's office issued a statement explaining that she signed the ethnic studies ban into law because she believes students "should not be taught to resent or hate other races or classes of people."

The state's U.S. Sen. Jon Kyl told Fox News that the Tucson program has "been a problem for years." He continued, "The legislature finally, I think, had it with that as well, and passed a law that said that they cannot teach things that try to pit race against race and really teach students that they should be--that they should feel oppressed by their own government."

In truth, Arizona's Black, Latino and Native American populations do not need ethnic studies to learn that they are oppressed by their own government. Arizona was steeped in the principles of white supremacy well before it became the nation's 48th state in 1912.

When the Civil War broke out in 1861, the Arizona Territory adopted its own Ordinance of Secession and declared itself the "Confederate Territory of Arizona." The Confederacy was delighted, since Arizona could provide a path to expand the slave system further westward toward California.

In 1863, the U.S. government established the Territory of Arizona (with different borders), and the dispute ended only with the defeat of the Confederacy in 1865. (For the record, both Confederate and federal troops attacked Native tribal communities with equal ferocity.)

In that same year, Arizona's political class passed its first ban on "miscegenation," barring marriages between whites and "Negroes, mulattoes, Indians, Mongolians." This ban was revised four times--removing American Indians in 1942, and adding "Malays" in 1928 and "Hindus" in 1956--and was only repealed in 1962. 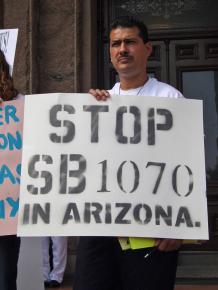 Arizona's Jim Crow segregation laws were similar in nature to those of the Deep South. In 1912, a voting statute required voters to be able to read the U.S Constitution in English "in such manner as to show he is neither prompted nor reciting from memory, and to write his name."

In 1899, the Arizona territory passed a bill designating English as the language of instruction in public schools. This law, known as Title XIX, enabled local school districts to segregate Spanish-speaking students--who made up over 50 percent of Arizona's school-age population, according to Vicki L. Ruiz, writing in the Organization of American Historians' Magazine of History. As Ruiz described:

On the eve of the Great Depression, Phoenix, Arizona, represented a western apogee of segregation with George Washington Carver High School for Blacks, the Phoenix Indian School and several "Mexican" elementary schools sprinkled across the valley. The Tempe Eighth Street School was "restricted to 'Spanish American' or 'Mexican American'" youth and staffed primarily by student teachers from the neighboring normal school (now Arizona State University).

Hear Sharon Smith at Socialism 2010 in Chicago and Oakland, speaking on "The Rise and Fall of the Industrial Workers of the World" and "Rebuilding the Left in the Obama Era." Check out the Socialism 2010 Web site for more details. See you at Socialism!

THIS IS the historical context in which Gov. Brewer signed SB 1070 into law on April 24, mandating Arizona law enforcement agencies to detain anyone "suspected" of being an "illegal" immigrant unless they can produce sufficient documentation to prove otherwise.

Brewer, clearly enjoying the media attention in this election year, appealed to the law's small-minded supporters, invoking "states' rights" and a correlating degree of hostility to federal government: "The bill I'm about to sign into law--Senate Bill 1070--represents another tool for our state to use as we work to solve a crisis we did not create and the federal government has refused to fix."

A majority of the U.S. population currently supports Arizona's crackdown on immigrants. To be sure, this includes significant numbers who revel in their own ignorance. The Tea Party is, as expected, rallying around SB 1070.

But there are also undoubtedly many people who deplore Arizona's ban on ethnic studies, yet support SB 1070 as a means to punish Mexican immigrants who "broke the law." But these two new Arizona laws, passed within six days of each other, are part of a package, consciously aimed at ratcheting up the level of racism to the realm of hysteria. (On May 25, Brewer wrote a letter to Obama asking for unmanned drones to patrol the Arizona-Mexico border, comparing the U.S.-Mexico border to the wars in Iraq and Afghanistan.)

It is impossible to avoid the comparison between Arizona today and the era of Jim Crow segregation--or between the protests against these racist laws today and the struggles that finally ended Jim Crow laws by defying them en masse.

Although Rosa Parks is today revered for her role in launching the civil rights movement, at the time, most Southern (and Northern) whites disparaged her for promoting racial integration. When four Black students sat in at a Woolworth's lunch counter in 1960, they were soon joined by hundreds of other students from a nearby Black college--but they also faced protests by angry white mobs.

Indeed, at virtually every juncture, civil rights demonstrators encountered a violent white opposition seeking to uphold the segregation laws of their state. These racists justified their attacks because African-American activists "broke the law."

There is no doubt, however, that the civil rights movement challenged and ultimately changed prevailing opinion.

Researchers at Public Agenda Web site published a chronology of surveys on racial attitudes to commemorate the 50th anniversary of the 1954 Brown v. Board of Education that finally struck down segregation laws. These statistics show how the repeated images of white police and white vigilante mobs attacking thousands of peaceful Black protesters finally changed the minds of the majority. The statistics below show the shift in public opinion between the late 1950s and the 1960s, as the civil rights movement grew:

In 1958, fully 94 percent of respondents to a Gallup Poll opposed interracial marriages.

In 1959, 53 percent said that the Brown decision "caused more trouble than it was worth."

By 1964, 62 percent supported a law to guarantee Blacks "the right to be served in any retail store, restaurant, hotel or public accommodation," according to a Harris survey.

By 1964, a majority of the U.S. population said they supported the 1964 Civil Rights Act and opposed segregation laws.

In 1965, only one in five said they sided with Alabama authorities when police broke up a protest march in Selma.

LAWS ARE not sacrosanct, and neither are national borders--or the laws governing them. While governments carefully regulate the numbers of workers crossing their borders, corporations are free to scour the globe in search of new markets and cheap labor.

If Mexican workers feel compelled to leave their homeland to seek a living wage in the U.S., this is not an accident of history. On the contrary, U.S.-based multinationals bear much of the responsibility for their impoverishment, even more so in the wake of the North American Free Trade Agreement.

Roughly 10 percent of Mexico's workforce is now employed by temp agencies, according to the Mexico City-based Center for Labor Research and Union Advisement. Workers are offered contracts as short as 15 days and can work for years at the same company, in constant fear that their short contracts will not be renewed.

And U.S.-based Manpower Inc. is the biggest temporary agency currently operating in Mexico. A Manpower press release in January reported $22 billion in revenues from its 4,100 offices spread across 82 countries and territories. "Manpower's offices are now practically as ubiquitous as McDonalds' Golden Arches and as international," Kent Paterson observed recently at Corpwatch.org.

The financial crisis has accelerated the downward financial spiral of Mexican workers. As Paterson described, "The post-2008 devaluation of the peso made Mexican labor even cheaper for U.S. and European companies. Cereal's most recent study, however, found that average wages for electronics industry workers dropped 10 percent during 2008 and 2009. Labor production costs in Mexico now rival those in China, Cereal found."

Instead of blaming Mexican workers who are desperate to feed their families, U.S. workers should point the blame at corporations that show loyalty only to their own profit margins, as they force workers on both sides of the border to compete in a race to the bottom. This requires opposing the laws that uphold this horrendous status quo.

There is a new civil rights movement emerging today, with the goal of preventing this nation's return to racist tyranny--this time on the backs of Mexican immigrants. Tens of thousands of these activists are converging in Phoenix on May 29 to demonstrate their opposition to SB 1070. With the new law set to take effect on July 28, this is the launch of a summer of struggle in Arizona.

Many activists in this new movement have already shown a willingness to defy unjust laws in order to change them. And they come from many different walks of life.

For her part, Judy Burns, president of the Tucson Unified School District's governing board, told the Los Angeles Times that she has "no intention of ending" the district's ethnic studies program when it takes effect on December 31. And UPI reported that despite the passage of SB 1070, Burns has announced that any attempt to inquire about students' or their parents' immigration status by district staff "will not be tolerated."

Now is the time to stand on the right side of history.