The postwar war in Iraq

Eric Ruder explains what we should--and shouldn't--expect from the "end of combat operations" in Iraq proclaimed by the Obama administration.

"WE WON. It's over, America. We brought democracy to Iraq." Those were the words of a soldier from the 4th Stryker Brigade, supposedly among the last U.S. combat troops to leave Iraq, two weeks ahead of President Barack Obama's August 31 deadline for withdrawal.

This is a watershed moment for Iraq. But not because the U.S. occupation is over or any of the other reasons put forward by the mainstream media.

The Obama administration is claiming that the withdrawal of combat troops represents a new day for the country. "Politics, not war, has broken out in Iraq," Joe Biden told a convention of the Veterans of Foreign Wars on August 23.

Biden went on to assert a number of American accomplishments, including a decrease in violence, the negotiated resolution of complex divisions within Iraq's political class, the marginalization of al-Qaeda, and the creation of a 650,000-strong Iraqi security force "leading the way to defend and protect their country," the vice president said.

U.S. officials even have a new name picked out for the postwar war. After August 31, the U.S. mission in Iraq will change from Operation Iraqi Freedom to Operation New Dawn. 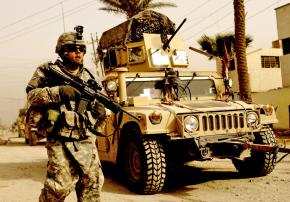 Never mind that violence in Iraq "decreased" only after the U.S. invasion plunged the country into civil war. Never mind that five months after national elections, Iraqi politicians still can't form a government. Never mind that the U.S. war itself created the opening for al-Qaeda to establish itself in Iraq. And never mind that even establishment analysts generally agree that Iraq is far from a "new dawn."

As the Center for Strategic and International Studies' Anthony Cordesman wrote:

Well, he did not wear a flight suit, stand on a carrier deck, or have a "Mission Accomplished" banner behind him. The fact remains, however, that President Obama did issue a second "mission accomplished" statement on Iraq on August 18, and one just as wrong and irresponsible as the one given by President Bush...The Iraq war is not over, and it is not "won." In fact, it is at as critical a stage as at any time since 2003.

Because of the ongoing insurgency, the political deadlock and the country's shattered economy, Cordesman projects that it will take a minimum of five and probably 10 years for Iraq to achieve anything approximating stability and security.

THE OBAMA administration is living up to the letter of its "status of forces agreement" with Iraq--the arrangement that establishes the official conditions for foreign troops in the country. Combat troops are gone--but only because the U.S. artfully reclassified the 50,000 American soldiers who will remain in Iraq from "combat troops" to "advise-and-assist brigades."

This is truly nothing more than a change in name, as military commanders bluntly admit. Asked by a CNN reporter if the withdrawal of combat troops meant the end of combat involving U.S. troops, Gen. Ray Odierno flatly answered, "No." He continued:

Odierno, like Cordesman, also acknowledged that U.S. troops may well remain in Iraq until 2020.

And in addition to soldiers wearing U.S. military uniforms, there are tens of thousands of private contractors in Iraq. The Obama administration is launching an "unprecedented" civilian operation, backed up by "a small army of contractors," according to the New York Times:

With no American soldiers to defuse sectarian tensions in northern Iraq, it will be up to American diplomats in two new $100 million outposts to head off potential confrontations between the Iraqi Army and Kurdish peshmerga forces.

To protect the civilians in a country that is still home to insurgents with al-Qaeda and Iranian-backed militias, the State Department is planning to more than double its private security guards, up to as many as 7,000, according to administration officials who disclosed new details of the plan. Defending five fortified compounds across the country, the security contractors would operate radars to warn of enemy rocket attacks, search for roadside bombs, fly reconnaissance drones and even staff quick reaction forces to aid civilians in distress, the officials said.

So Barack Obama hasn't ended the war on Iraq. Now more than seven years old, it's already gone on longer than the Second World War. It has cost $1 trillion. And since the "end of combat operations," one more U.S. soldier has been killed already, bringing the official death toll among American forces to 4,416. Of course, the loss of human life on the Iraqi side is incalculably higher at more than 1 million.

But the Obama administration still aims to accomplish in Iraq--with different strategies and tactics--what the bungling Bush administration failed to.

Consider the words of U.S. State Department spokesperson Philip Crowley--and pay close attention to his description of the U.S. "investment" in Iraq. Crowley described the end of combat operations as a "historic moment," but insisted that the U.S. commitment to Iraq in the long term was "unwavering." He said:

We've invested heavily in Iraq and have to do everything we can to preserve that investment to integrate Iraq, along with the neighborhood, into a much more peaceful situation that serves their interests, as well as ours.

Obama's defenders claim that the U.S. owes a debt to Iraq and must stay to set things right. But that isn't what people like Crowley think the ongoing U.S. presence is about. It's worth remembering the words of U.S. socialist journalist John Reed, writing in the early 20th century:

Uncle Sam never gives something for nothing. He comes along with a sack stuffed with hay in one hand and a whip in the other. Anyone who accepts Uncle Sam's promises at face value will find that they must be paid for in sweat and blood.

IN REALITY, the U.S. war on Iraq isn't seven years old, but nearly two decades old. It began with the first invasion of Iraq carried out by George H.W. Bush in 1991. Bill Clinton continued to enforce the most devastating and complete regime of economic sanctions ever known. It was the half-million Iraqi children killed by those sanctions that Clinton's Secretary of State Madeleine Albright was referring to when she said: "We think the price is worth it."

The U.S. has thoroughly destroyed Iraq. Today, George W. Bush is hated for this the world over because he enthusiastically led the charge in 2003. But Bush Sr., Clinton and now Obama are also responsible.

Obama is continuing an old policy. What's different is that he has done so while using antiwar rhetoric, a reflection of the political reality during the 2008 elections, which were marked by surging antiwar opinion.

In one sense, it doesn't matter that Barack Obama sits in the Oval Office. The priorities of U.S. imperialism have dictated the war on Iraq, and every president has bowed to them. Don't forget: If the Democrats today are the inheritor of that program in Iraq, it's also true that the Democratic Party led the U.S. into every major war of the 20th century until Iraq.

But in another sense, it does matter that Obama is in charge--precisely because so many of his supporters thought that publications like Socialist Worker were crazy to argue that Obama would only end the war in Iraq if there was an antiwar movement forcing him to do so.

That's why this moment is a watershed--or at least should be--for all the people who longed to see an end to the destruction of the Iraq war, and hoped that Obama would deliver that end. As it becomes clear that the Obama administration hasn't ended the war, the question will loom about will happen to all those people who had their hopes dashed.

Obama's deceptions about Iraq and Afghanistan have already produced widespread disorientation among millions of people who voted for him enthusiastically. For some, the disillusionment may turn into apathy or cynicism. But others will arrive at the conclusion that if the Democrats won't put a stop to the war on Iraq even when they control the White House and Congress, then perhaps they will have to take action themselves--and organize for a political alternative that works to put an end to war once and for all.