Millions more Americans are living in poverty with no end in sight to their misery. But there are some people who are getting along just fine. Nicole Colson reports.

SHORTLY BEFORE midnight, at the end of each month, a curious scene plays out at Wal-Mart stores around the country. Customers come into the stores and start filling their baskets with essentials--milk, bread, eggs, baby formula, diapers--waiting for midnight, when they can finally afford to checkout.

Because that's when their food stamps or other electronic government benefit cards for the next month are activated.

[O]ur sales for those first few hours on the first of the month are substantially and significantly higher. And if you really think about it, the only reason somebody gets out in the middle of the night and buys baby formula is that they need it, and they've been waiting for it. Otherwise, we're open 24 hours--come at 5 a.m., come at 7 a.m., come at 10 a.m. But if you're there at midnight, you're there for a reason.

The reason, of course, is poverty.

This "paycheck cycle"--a surge in spending on essentials at the beginning of the month, when workers and the poor receive their wages or government benefits--is nothing new. But it has recently become, according to Simon, especially "extreme"--with more and more shoppers at the very beginning of the month and even fewer at the end. Wal-Mart is also seeing an "ever-increasing amount of transactions being paid for with government assistance," Simon added. 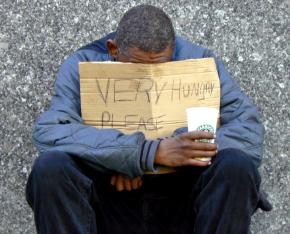 According to recent Census Bureau statistics, the percentage of Americans falling below the poverty line in 2009 was the highest it has been in 15 years--and the figure is certain to increase once again for this year.

Last year, an additional 4 million Americans fell under the official poverty line--which is set at a paltry $10,830 in pretax cash income for single adult, or $22,050 for a family of four. That brings the total number of Americans now living in poverty to 43.6 million, or 14.3 percent of the population--one in every seven U.S. residents, and a full percentage point's increase over 2008. The Census Bureau noted that the rise was especially steep for children--with one in five now living in poverty.

This was the largest year-to-year increase since poverty statistics started being kept.

Racial disparities are even more pronounced--25.8 percent of African Americans and 25.3 percent of Hispanics now live in official poverty.

But even these sobering statistics show only part of the story.

Millions more people don't qualify as living in poverty--because they were just barely able to keep their heads above water by sharing homes with parents, siblings or even non-relatives. According to the Census statistics, over the last two years, there has been an 11.6 percent increase in the number of such multi-family households.

According to the New York Times:

Included in that number was James Davis, 22, of Chicago, who lost his job as a package handler for Fed Ex in February 2009. As he ran out of money, he and his 2-year-old daughter moved in with his mother about a year ago, avoiding destitution while he searched for work. "I couldn't afford rent," he said.

Danise Sanders, 31, and her three children have been sleeping in the living room of her mother and sister's one-bedroom apartment in San Pablo, Calif., for the last month, with no end in sight. They doubled up after the bank foreclosed on her landlord, forcing her to move.

"It's getting harder," said Ms. Sanders, who makes a low income as a mail clerk. "We're all pitching in for rent and bills."

AS BLEAK as the Census Bureau numbers are, they actually leave millions of people who are living in poverty uncounted. As AlterNet's David DeGraw explained:

The Census Bureau uses a long outdated method to calculate the poverty rate. The Census is measuring poverty based on costs of living metrics established back in 1955--55 years ago! They ignore many key factors, such as the increased costs of medical care, child care, education, transportation, and many other basic costs of living. They also don't factor geographically based costs of living. For example, try finding a place to live in New York that costs the same as a place in Florida.

In all, DeGraw estimates, the real number of those living in poverty in 2009 was at least 52 million Americans. Add in the 3.3 million families that are kept (temporarily) out of "official" poverty by unemployment benefits, and the additional 2.3 million kept out because of food stamps, and the number of those actually in living in poverty goes up to an estimated 58 million Americans--nearly 19 percent of the population in the world's wealthiest country.

These numbers are only getting worse.

Unemployment claims were higher than expected in September, and foreclosures were up as well. In Massachusetts alone, there was an 83 percent jump in foreclosures in August over the same month a year ago.

More than 1 million American homeowners are likely to go into foreclosure this year--a 10 percent increase over 2009. According the Associated Press, one out of every 78 homeowners in the U.S.--1.7 million households--received a foreclosure-related warning between the months of January and June.

Food banks and other charities across the U.S. are also seeing large spikes in demand across the country as more families struggle to make ends meet. "We're seeing more younger people coming in that not only don't have any food, but nowhere to stay," Marla Goodwin, director of Jeremiah's Food Pantry in East St. Louis, Ill., told the Times.

Timothy M. Smeeding, director of the Institute for Research on Poverty at the University of Wisconsin, told the Times that it is a near certainty that the statistics will show another dramatic rise in poverty for 2010--especially among young adults without college educations (and their children), for whom jobs continue to be especially scarce.

Overall, the recent figures on poverty show that working-class and poor families in the U.S. have "lost" an entire decade. As Harvard economist Lawrence Katz told the Times, "This is the first time in memory that an entire decade has produced essentially no economic growth for the typical American household."

OF COURSE, some households are doing just fine.

In September, Forbes magazine released its annual list of the 400 wealthiest Americans--and the group's net worth had jumped 8 percent from last year to a combined $1.37 trillion. The industries that dominate the list--surprise, surprise--are finance, investment and real estate.

But you wouldn't know that to hear the constant whining coming from the rich.

In the debate over whether Congress should allow Bush-era tax cuts for the wealthy--estimated to cost around $700 billion over the next 10 years--to expire, the cries of the wealthy reached a near-deafening level.

[S]elf-pity among the privileged has become acceptable, even fashionable. Tax-cut advocates used to pretend that they were mainly concerned about helping typical American families. Even tax breaks for the rich were justified in terms of trickle-down economics, the claim that lower taxes at the top would make the economy stronger for everyone.

These days, however, tax-cutters are hardly even trying to make the trickle-down case. Yes, Republicans are pushing the line that raising taxes at the top would hurt small businesses, but their hearts don't really seem in it. Instead, it has become common to hear vehement denials that people making $400,000 or $500,000 a year are rich. I mean, look at the expenses of people in that income class--the property taxes they have to pay on their expensive houses, the cost of sending their kids to elite private schools, and so on. Why, they can barely make ends meet.

And among the undeniably rich, a belligerent sense of entitlement has taken hold: it's their money, and they have the right to keep it.

Take Ben Stein--the former Nixon speechwriter and current credit-report/eye-drop pitchman. In a piece titled "Raising My Taxes Is a Punishment," the actor known for making a virtue out of his ability to bore an audience complains, "I am not quite sure what my sin is. I worked for almost every dollar I have, except for a small percentage my parents left me by virtue of hard work and Spartan living, and most of that was taken by the federal estate tax...I pay my income taxes, and after them and the commissions I pay my agent, I am left with about 35 cents for every dollar I earn."

Actually, Stein has it wrong about taxes. As Chuck Collins of the Institute for Policy Studies notes, "Over the last half century, Congress has steadily reduced tax obligations for the very rich and global corporations. Between 1960 and 2004, the top 0.1 percent of U.S. taxpayers--the wealthiest one in one thousand--have seen the share of their income paid in total federal taxes drop from 60 to 33.6 percent."

Or there's University of Chicago law professor Todd Henderson, who complained on the Internet (before the piece was quickly taken down) about the fact that the family income threshold of $250,000--where the higher tax rates kick in--is simply too low for folks like himself.

"Our combined income exceeds the $250,000 threshold for the super rich (but not by that much), and the president plans on raising my taxes," he wrote. "After all, we can afford it, and the world we are now living in has that familiar Marxian tone of those who need take and those who can afford it pay. The problem is, we can't afford it...Life in America is wonderful, but expensive."

But perhaps the worst of the whiners was Charles Munger, the billionaire vice chairman of financial conglomerate Berkshire Hathaway Inc.

In a recent lecture at the University of Michigan, Munger not only defended the multitrillion-dollar bailout of Wall Street, but told students that people in economic distress should "suck it in and cope."

"You should thank God" for bank bailouts, Munger said, regarding the government handout to the financial institutions that caused the economic crisis. But, he quickly added, "[I]f you talk about bailouts for everybody else, there comes a place where if you just start bailing out all the individuals instead of telling them to adapt, the culture dies."

When one student asked whether the government should have bailed out homeowners instead of the banks, Munger said: "You've got it exactly wrong. There's danger in just shoveling out money to people who say, 'My life is a little harder than it used to be. At a certain place you've got to say to the people, 'Suck it in and cope, buddy. Suck it in and cope.'"

Meanwhile, the government bailout of the financial industry has worked wonders for Munger's personal bottom line. He ranked 230th on Forbes magazine's list of the wealthiest Americans in 2009--his stake in Berkshire alone is currently worth about $1.6 billion.

That sense of entitlement among these rich crybabies is the hardest thing to stomach--the idea that they are justified in laying claim to their private jets, fancy mansions and, of course, their industry-wide bailouts. They believe they worked harder for millions (and, in many cases, billions) than those struggling each month to pay the rent or desperately waiting for the end of the month so they can get in line at Wal-Mart to buy baby formula at 12:01 a.m.

That the Democrats decided to postpone the vote on the tax cuts until after the November elections--even as states slash spending on social services--shows who they are more committed to protecting.

It's ordinary Americans who deserve a real bailout--not the parasites at the top.