How the banks got us coming and going

Lee Sustar looks at the crisis that has led some of the country’s biggest banks to declare a temporary moratorium on home foreclosures.

NOW THAT the same predators who pushed people into self-destructing mortgages have been caught carrying out fraudulent foreclosures, will hard-pressed homeowners finally get permanent relief?

If they organize and fight back, yes. But the banks and their political front-men and -women will do anything they can to prevent that.

The Democrats are both squirming over their role in abetting the banks' foreclosure factories and sensing a political opportunity. Thus, President Barack Obama has refused to sign what had been stealth legislation designed to speed up the "robo-signing" of foreclosure documents by forcing states to accept all such documents as valid, even if they originated in a state where this sort of dubious paperwork is standard.

The scandal is so widespread that several big banks have declared a full or partial moratorium on foreclosures. Bank of America called a halt on proceedings across the U.S., while PNC Financial, JPMorgan Chase and Ally Financial's GMAC Mortgage unit stopped foreclosures in the 23 states where a judge must approve all such proceedings. 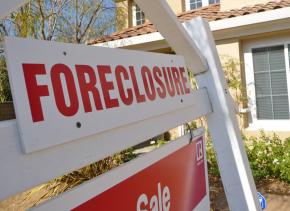 But lest anyone get the wrong idea, top White House adviser David Axelrod weighed in to ease the banksters' fear of an all-out ban on foreclosures. "I'm not sure about a national moratorium because there are, in fact, valid foreclosures that probably should go forward," he said on the CBS's Face the Nation news program.

So nearly two years after Obama should have declared a moratorium on foreclosures, the pushback against the banks has finally come--not from the president or his adminstration, but by a loose collection of homeowners, their advocates, judges and state officials who stood up to the banks.

The halt on the foreclosures was long overdue, according to Kathleen Day, a spokesperson for the Center for Responsible Lending in Washington. She cited the depositions by a GMAC manager, Jeffrey Stephan, who admitted that for five years, he signed 10,000 foreclosure documents per month without reading them.

"We think this is emblematic," Day said in an interview. "The industry is trying to paint this as a the glitch, where we think this is the smoking gun. Everyone has heard widespread anecdotal evidence of fraud." The Center for Responsible Lending is a co-counsel in a case challenging one of the foreclosures that Stephan signed off on in Maine.

As many observers have noted, the banks' scandalous behavior in throwing people out of their homes is but a mirror image of their effort to foist shoddy mortgages on them in the first place.

During the go-go years of 2004-2006, the banks were all too happy to sign up just about anyone for sub-prime loans and other faulty mortgage products. That's because the loans didn't stay on the banks' books, but were packaged, or "securitized," into bonds created by Wall Street banks.

Those bonds, in turn, were the foundation for complex financial instruments known as derivatives, since their prices were "derived" from the underlying price of the bonds. One type of derivative, the credit default swap, became central to the speculation that derailed the world financial system in the fall of 2008.

With hundreds of billions of delinquent mortgage loans still on the books, banks are now trying to recover whatever money they can by stepping up the foreclosure process. While a house may be worth substantially less than the price it fetched four or five years ago, the banks are anxious to repossess it and sell it for what they can get, rather than eat the losses.

And they aren't about to let legal niceties stop them: Even if no clear paper trail linked the loan to the title of the home targeted for foreclosure, the banks treated their own creation, the Mortgage Electronic Registration Systems (MERS), as sufficient documentation. Many homeowners found that MERS was the entity foreclosing on their homes--and when MERS couldn't produce the note, as required by law, some were able to have their foreclosures blocked.

If MERS is unreliable--or a vehicle for fraud--it's in keeping with standard practice in the mortgage industry. The process of loan securitization has completely scrambled the relationship between the holder of the mortgage notes and the homes associated with them. Usually, the banks or loan servicers pushing foreclosures didn't have the physical note, as is commonly required by law. But they barreled ahead anyway, forcing uncounted numbers of people out of their homes without due process--and in violation of the law.

THE BANKS will move quickly to try to re-gear their foreclosure machine to go after the 5 million homes that are today either in foreclosure or in pre-foreclosure proceedings.

But that's only the tip of the iceberg. Some 11 million homes are "underwater"--that is, the houses are worth less than the amount owed on them. According to Deutsche Bank, some 20 million homes will be underwater by the end of 2011. And there's little hope of help from the top. The federal government's Making Home Affordable program has failed to help more than a tiny minority of homeowners to modify their loans.

At least now that the fraudulent foreclosures have been exposed, lawyers will move in to seek damages for victims and head off further attempts to bum-rush people out of their homes.

But any lasting relief from the banks' relentless drive to foreclose will come about through political action. While state legislatures and Congress are making pre-election noises about taking decisive action, those facing the threat of foreclosure would do well to follow the example of grassroots activists organizing against eviction. In Boston, the group City Life/Vida Urbana has been able to score some important successes, as has the Chicago Anti-Eviction Campaign.

The banks hope to resolve their foreclosure snafus in a few weeks. But the foreclosure crisis is going to last years, the result of both the burst housing bubble and the impact of mass unemployment.

In any case, the question of whether the banks' paperwork is in order or not is irrelevant from the standpoint of justice. The banks pumped up the housing market to make huge profits, crashed the economy in the process and now seek to foist the costs onto working people. Just as the banks didn't care who bought the mortgages they bundled together, they don't care how many lives they wreck by throwing people out of their homes.

The foreclosure scandal has demonstrated once more that it is right to resist such attacks--and that it's urgently necessary to do so.