Democrats scare out the vote

The Republicans are a frightening bunch, as Barack Obama constantly reminds us--but there's no reason to believe that the Democrats will take them on.

"JOE BIDEN has a useful saying," Barack Obama told a group of campaign donors in Cresskill, N.J. "He says, 'Don't compare me to the Almighty, compare me to the alternative.' I think Democrats would be well-served right now to just keep that uppermost in their minds."

Translation: Forget about what we did for the past two years, and focus on what the Republicans will do for the next two.

That's the message of every speech, e-mail and advertisement coming from the Democratic Party establishment as the November election--and what is expected to be a huge washout for the Democrats--approaches.

The Democrats are right that the Republicans--from Tea Party lunatics like Sharron Angle in Nevada and Christine O'Donnell in Delaware to establishment leaders like Mitch McConnell of Kentucky and John Boehner of Ohio--are terrifying. But the right wing is setting the agenda in U.S. politics because the Democrats have caved and conceded to them at every step of the way.

Which is why the case for voting for the lesser of two evils--holding our noses to elect Democrats who don't represent our interests--is flawed. Putting the Democrats in office is no way to stop the right, as we've seen in the past two years--no matter how far the party's leaders go in trying to scare up votes. 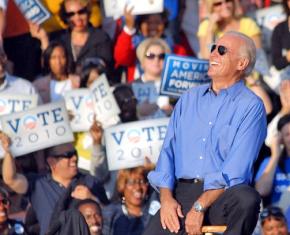 FEAR AND loathing about what would happen if the Republicans take over the House, the Senate or both has replaced the hopes and expectations that were the big motivators for Democratic Party voters in 2008. And liberal leaders are putting the squeeze on supporters to forget their disappointments with the Obama administration so far.

Here's an e-mail from Vermont independent Sen. Bernie Sanders--almost certainly the only politician in Washington to have a picture of Socialist Party leader Eugene V. Debs on his office wall:

Dear Friend,
These are tough times. People are angry and frustrated. As an Independent who believes that the Democrats have not been as bold and aggressive as they should have been in addressing the many crises we face, I share that disappointment.

However, let's not kid ourselves. If the Republicans take control, their sole mission will be to represent the interests of the wealthy and powerful and ensure President Obama fails. If you've been sitting this out because of frustration or apathy, it's time to wake up and realize the gravity of this moment. We simply can't allow the Republicans to win, so I'm urging you to act right now. Click here to donate.

But while the Republicans are undeniably scary--especially the Tea Partiers among them--there's absolutely nothing to inspire confidence that the Democrats will take them on.

They certainly haven't so far. The Democrats came to Washington last year in control of the White House and with big majorities in Congress, plus a mandate for changing Washington politics as usual. Not only have the Democrats accomplished almost nothing of what was expected of them, but they've allowed the Republicans--consigned two years ago to the weakest minority in a generation--to set the political agenda.

But now, the Democrats need votes again, so Obama is telling liberal voters to stop complaining and get behind even the most conservative Democrats. So much for change. And as for expectations of what's to come, Obama is already promising gridlock and inaction. "I don't anticipate that getting better next year," he told supporters at a Democratic fundraiser this week. "I anticipate that getting worse."

Sure, the Republicans are scary. But there's plenty about the Democrats that workers and the poor ought to be worried about.

In the face of the worst economic crisis since the Great Depression, the Obama administration's policies have prioritized keeping Wall Street and Corporate America profitable. While the administration rushed to bail out the banks, it stalled on relief to millions of homeowners facing foreclosure. And Obama's bipartisan National Commission on Fiscal Responsibility and Reform is almost certain to recommend cuts in Social Security benefits and Medicaid and Medicare--but not until after the election, when the commission will issue its report.

Even a woman's right to abortion--which in election after election has been used by Democrats as the most important reason to oppose the Republicans--has come under attack under Obama.

When Democrats were trying to push through health care legislation--which succeeded most of all in entrenching the power of the insurance industry--earlier this year, they backed amendments proposed by Rep. Bart Stupak (D-Mich.) and another by Sen. Ben Nelson (D-Neb.) that will potentially cut abortion access to millions of poor women. In the end, the Obama "compromise" was to sign an executive order affirming the Hyde Amendment, which bans federal funding to poor women who seek abortion.

If voting for Democrats was supposed to keep the anti-abortion Republican wolves from the door, in the end, it allowed the anti-choice Democratic wolves right in.

Candidates representing the conservative Tea Party movement--from anti-abortion, anti-gay and anti-worker Christine O'Donnell to Rand Paul of Kentucky, who wants to abolish the Department of Education--have been especially effective bogeymen for Democrats trying to get out the vote for the lesser evil.

For instance, in Colorado, senate candidate and Tea Partier Ken Buck likened LGBT people to those suffering from alcoholism on NBC's "Meet the Press"--an outrage that came a week after several well-publicized suicides of LGBT teens. Buck also used the phrase "buyers' remorse" to refer to a case of a college student charging date rape, which he refused to prosecute as a county district attorney.

Common sense will tell most people that we have to keep Buck out of any kind of public office, much less the U.S. Senate. But to say only this leaves his Democratic incumbent off the hook.

There's no pressure on Michael Bennet, who was appointed last year after Sen. Ken Salazar took a position in Obama's cabinet. Just a week ago, Bennet decided to voice his opposition to the Employee Free Choice Act (EFCA)--labor law reform legislation that would have made it easier for unions to organize new members, if it hadn't died on the vine in Congress over a year ago.

In other words, Bennet stabbed his union supporters in the back. But union members will be pressured to vote for Bennet anyway.

This is the logic of lesser evilism: If working people vote for the Democrats out of fear of the greater evil, there's no reason for the Democratic candidates to respond to their demands--and every reason to move even further to the right to appeal to more conservatives voters.

THE PRESSURE to vote for the lesser of two evils isn't new. More than 40 years ago, socialist Hal Draper wrote a classic article in which he referred to the 1964 election, when Democratic supporters were told to set aside all disagreements with incumbent President Lyndon Johnson in order to keep Republican Barry Goldwater out of the White House:

In 1964, you know all the people who convinced themselves that Lyndon Johnson was the lesser evil as against Goldwater, who was going to do Horrible Things in Vietnam, like defoliating the jungles. Many of them have since realized that the spiked boot was on the other foot; and they lacerate themselves with the thought that the man they voted for "actually carried out Goldwater's policy." (In point of fact, this is unfair to Goldwater: he never advocated the steep escalation of the war that Johnson put through; and more to the point, he would probably have been incapable of putting it through with as little opposition as the man who could simultaneously hypnotize the liberals with "Great Society" rhetoric.)

So who was really the Lesser Evil in 1964? The point is that it is the question which is a disaster, not the answer. In setups where the choice is between one capitalist politician and another, the defeat comes in accepting the limitation to this choice.

Just like Johnson before him, the "peace candidate" Obama has not only continued the occupation of Iraq that he vowed to end, but he has escalated U.S. wars in Afghanistan and Pakistan--and he hasn't faced even a fraction of the antiwar resistance that George W. Bush did.

The problem goes to the heart of U.S. "democracy"--a system dominated by two parties that both represent Corporate America. While one of those parties, the Democrats, says it represents workers, minorities and the poor, it is ultimately committed to the status quo.

At election time, the leaders of the Democrats and of liberal organizations that back the party, year in and year out, demand that voters swallow their frustrations and their hopes because this is a "bad time" to air disagreements with Democratic Party policy.

But if the Obama administration has shown us anything, it's that Democrats never think there's a good time for the left to make demands.

After all, for the past two years, the Democrats have controlled the White House with a president who was popular with unprecedented numbers of people when he took office--and both houses of Congress, with bigger majorities than either party has enjoyed in years.

Why wasn't that a good time to push for EFCA? Or for health care reform that wasn't packed full of concessions to the insurance industry? Wasn't the last two years a good time for Obama to live up to his rhetoric about opposing the discriminatory "don't ask, don't tell" policy against LGBT people in the military. Instead, the Obama Justice Department recently chose to appeal a federal judge's decision declaring "don't ask, don't tell" unconstitutional.

Back in 2000, when the Republicans stole the presidential election, the Democrats backed off a real challenge against the theft of the White House, even though that meant eight years of George W. Bush. As the late New York Democratic Sen. Daniel Patrick Moynihan put it to the Washington Post at the time: "It doesn't so much matter who wins. The important thing is the legitimacy of the system."

Moynihan was exactly right about what the difference between Republican and Democrat means to the U.S. political establishment.

The left should reject the politics of lesser evilism and organize the kind of independent movements that challenge the status quo.

Socialists support genuine, independent, left-wing alternatives at the ballot box because they challenge the stranglehold that the Democrats and Republicans have over U.S. politics. But the socialist idea of political organizing isn't confined to elections every few years. It happens every day--protesting for immigrant rights, stopping evictions in our neighborhoods, rallying against wars and occupation, defending abortion clinics against attacks from the right, and in meetings where people discuss and debate an alternative to the profit system.

Socialists stand for fighting for the issues that we care about--not settling for the lesser of two evils.