Down a notch or up?

Alan Maass wonders if it's time to restore sanity--or something different.

NO ONE knows how many people will come to Washington, D.C., next Saturday for Jon Stewart and Stephen Colbert's Rally to Restore Sanity and/or Fear, but here's hoping the turnout puts Glenn Beck to shame.

Beck's circus in front of the Lincoln Memorial in late August--insultingly held on the anniversary of the 1963 March on Washington for civil rights--was hyped as drawing half a million people or more, but an analysis of aerial photos put the real number at a fraction of that.

With hundreds of buses coming from around the East Coast, Stewart and Colbert's gathering will probably top Beck's--and that doesn't include satellite events in Chicago and Los Angeles, plus nearly 1,000 associated "meet-ups" and counting, planned for across the country and even the world.

In the midst of an election campaign where the right-most reaches of the Republican Party are setting the agenda, the Stewart-Colbert rally will be a breath of fresh air. It will speak for millions of people who despise Glenn Beck and Sarah Palin, and the Tea Party fanatics who cheer them on. 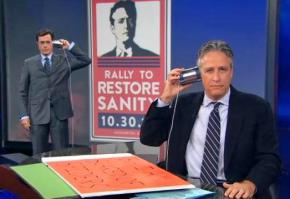 Certainly the Democrats see it that way. "This is basically the anti-Tea Party rally," summarized Emma Ellman-Golan, president of the Democratic Club at the University of Pennsylvania, which is offering cheap bus rides to D.C., with a discounted rate for anyone who volunteers to work on local campaigns.

But the Democrats probably won't get away unscathed in D.C. Stewart in particular has shifted the aim at the Daily Show toward Barack Obama and the Democrats more often in recent months, not just for the sake of token balance, but in genuine frustration at their timid response to the outrages of the right.

Like Stewart's and Colbert's shows on Comedy Central, the rally will reflect the political mood of a lot of people whose voices aren't represented in national politics or in the media. They are the millions of people on the broad left who looked forward with a sense of hope when Barack Obama moved into the White House, but who are disappointed at what's happened since--and in particular, are frightened and angry about the successes of the right.

But there's a catch to the Rally to Restore Sanity and/or Fear that shouldn't be ignored. For Stewart especially, one message of the day will be that "reasonable" people ought to also dismiss anyone who expresses their fear and anger too loudly.

Stewart says he thinks America needs to "take it down a notch"--and that means not only the Tea Party crazies, but people on the left who attend protests against the bigotry spewed by the right toward Muslims, or the hate directed at immigrants or LGBT people, or the criminal wars fought around the world by the U.S.

WHEN STEWART and Colbert announced their initially competing, now merged rallies a month ago, they were obviously responding to Beck's Tea Party hate-fest at the Lincoln Memorial. To counter the so-called Rally to Restore Honor, Stewart called a Rally to Restore Sanity--to be held on "a date of no significance whatsoever," rather than the anniversary of probably the most important demonstration for civil rights in the 20th century.

Colbert's onscreen character is a conservative blowhard like Beck or Bill O'Reilly, so his contribution to the October 30 events--under the slogan "Keep Fear Alive"--was always a flat-out parody of the right.

But Stewart's rally has another dimension. When he announced the "Million Moderate March," he said it was for people who rejected both the right-wingers who denounce Barack Obama as a socialist and the left-wingers who branded George W. Bush as a "war criminal."

But the problem here is that one charge is true and the other isn't. Barack Obama isn't a socialist, as we at SocialistWorker.org have been at pains to point out. But George W. Bush and his administration did commit war crimes--the lies during the run-up to the invasion of Iraq, the torture at Abu Ghraib, the indefinite detentions at Guantánamo Bay.

"War criminal" may sound harsh to Stewart. But the real question is whether it's true or not.

The Web site for Stewart's rally continues along the same lines:

We're looking for the people who think shouting is annoying, counterproductive and terrible for your throat; who feel that the loudest voices shouldn't be the only ones that get heard; and who believe that the only time it's appropriate to draw a Hitler mustache on someone is when that person is actually Hitler...

Ours is a rally for the people who've been too busy to go to rallies, who actually have lives and families and jobs (or are looking for jobs)--not so much the Silent Majority as the Busy Majority.

Now, the main target here is the Tea Party crazies and "birther" fanatics. I'm sure that anyone who goes to the trouble of traveling to Washington for the Stewart-Colbert rally will have the right wing in mind when they hear about someone drawing a Hitler mustache. In fact, most people who attend will probably think the left hasn't done enough shouting.

And to give Stewart his due, I have no doubt that when he says he thinks America should take it down a notch, he's mostly thinking about the pathological right-wingers who believe that Barack Obama is a secret Muslim with an equally secret communist agenda.

But Stewart does have a problem with a lot of the shouting or protest that comes from the left. Anyone who's watched knows that when the Daily Show runs footage of a demonstration for a progressive cause, it's a fairly safe bet that you'll see the weirdest protester the editors can find, with the implication that everyone else is just as goofy.

In his rally announcement, Stewart singled out 9/11 "Truthers" and Code Pink activists as examples of left-wingers whose "shouting" is counterproductive.

First of all, no part of the antiwar movement accepts the 9/11 conspiracy theory crackpots as a legitimate part of the struggle--they're as likely to be right-wing libertarians as anything else, in our experience.

But how can Stewart seriously lump Code Pink in with Glenn Beck and the Tea Party? Whether or not you agree with Code Pink's tactics, there's no comparison between a group of activists whose appearance in the mainstream media comes mainly when they sit behind a witness at a congressional hearing and a man with daily access to the microphones of Fox News' multibillion-dollar media empire.

Stewart makes a powerful critique of many injustices in U.S. society, but he seems to think that people like the members of Code Pink who act on the basis of such critiques are only doing it because they're seeking attention or pursuing their own fanatical obsessions--whereas "real people" have "lives and families and jobs."

Needless to say, that's a caricature of the struggles and movements we report on every day at SocialistWorker.org.

IT'S TOO bad, because the Daily Show and the Colbert Report are just about the only news shows worth watching on television--even though they officially claim to be "fake" news.

The Daily Show does occasionally descend into stupidity and ugliness--often on the topic of the Middle East, when the jokes can sink to the level of boy-they-talk-funny-over-there. But more often, the show is driven by an unapologetically progressive critique of U.S. politics and society--and one that's far enough to the left to be critical of the Obama administration and the Democrats for not doing more.

Stewart's best moments come when he gets visibly pissed off at some example of bigotry or arrogance or greed. He becomes the person with the chance we all dream about to speak truth to power--only backed up by a crack team of writers, and with an archive of video clips that seem to document every moment of media or political idiocy of the last generation.

It does the soul good to watch the Daily Show on these nights. But at the same time, when Stewart insists he's not a radical, he isn't just trying to avoid being attacked as biased. Stewart's politics are ultimately confined by his liberalism--his view that he's the reasonable and realistic one in the middle, pleading for civility against the minority of extremists on either end of the political spectrum who do all the shouting and protesting.

Is that really what's wrong with U.S. politics--too much shouting and protesting?

First of all, as Salon.com's Glenn Greenwald pointed out, right-wing monsters like columnist Bill Kristol or John Yoo, the architect of the U.S. government's justifications for torture, can express themselves in a perfectly calm and polite tone. The problem is what they say, not how they say it.

And second, what's wrong with protesting? Why shouldn't people get angry about the vile racism they hear from the right wing, or the pathetic backsliding of the Democrats? Why shouldn't they organize themselves to do something about it?

After all, the principles of democracy and equality that someone like Jon Stewart stands by today were all, at some point in history, a matter of bitter and sometimes violent disagreement.

Martin Luther King is claimed today by every politician, but in his "Letter from a Birmingham Jail," he famously disagreed with those who advised the civil rights movement calm down and wait. "We know through painful experience that freedom is never voluntarily given by the oppressor," he wrote. "It must be demanded by the oppressed."

Of course, most of what Jon Stewart has to say shows that he actually isn't as worried about the fact of "shouting" as about who's doing the shouting and what they're shouting about.

That's even more true about the people who are excited about the Rally to Restore Sanity and/or Fear. Another irony about the "Million Moderate March" is that the vast majority of people who will attend aren't moderate at all. They'll be bitterly opposed to the right wing and at least disappointed, if not outright angry, with the Obama administration--and the fact of their presence will be evidence that at least some think they need to do something about it.

I'm expecting that the rally will bolster their discontent with the status quo--and be good for some laughs, too. But what comes after sanity? People who care about justice and democracy have a lot of challenges ahead of us. There's no way to meet them by taking it down a notch.