Why should politics be polite?

Scott McLemee reviews a book about civility in politics that sheds light on the questions raised by the Jon Stewart rally in Washington, D.C., this weekend.

We get regular visits from the Tea Partiers, with their outrage, their guns and their imaginatively spelled signs. Earlier this month, amidst the many thousands of people attending the One Nation rally, a few hundred people in the Socialist Contingent marched with signs demanding higher taxes for the rich and an end to the wars. (Full disclosure: I was part of this, and joined in chanting, "We're gonna make Glenn Beck cry!") And each year, shortly before Halloween, the drag queens turn out in force to strut their stuff on 17th Street--as if to show that Monica Lewinsky is alive and well, albeit with a hint of stubble.

The Klan comes to town every so often. Then the police get a lot of overtime. Other than that, these gatherings tend to be peaceable enough. And so one would expect with this coming weekend's gathering, convened by Comedy Central's faux news anchors Jon Stewart and Stephen Colbert--particularly since it's being promoted as a rally for the militantly moderate. 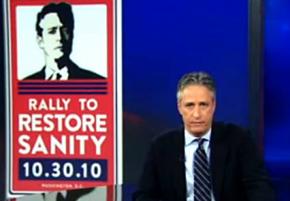 Blaming the left and the right equally for the shabby state of American political discourse, its goal is, in the words of Stewart, to "take it down a notch for America." The default response a longtime DCer will be, if anything, even more non-ideological: "Thank you for your tourism dollars. Now please go home."

But while bracing for the influx of visitors (this is a city, after all, where the mass transit system occasionally doesn't break down), I've been trying to think about the strangeness of this event. It is not so much a political protest as a parody of a political protest. Yet it will nonetheless serve partisan ends. The Democratic slogan for this election season might as well have been, "Don't blame us, we've never actually done anything!" which has not exactly galvanized the youth vote.

The Democrats are, of course, a predominantly centrist party (delirious fantasies about Obama as follower of Franz Fanon notwithstanding). So it's not hard to tell which electoral base will be mobilized by the opportunity to consume well-produced comic infotainment in the nation's capitol.

A NEW book provides an interesting gloss on the impending gathering--even though it was published in August, a few weeks before Stewart and Colbert announced plans for what's now called the Rally to Restore Sanity and/or Fear.

Susan Herbst's Rude Democracy: Civility and Incivility in American Politics avoids the familiar plaint that American political discussion was once ever so civilized, then began to decay sometime in the recent past. Making a broad but fairly succinct review of the interdisciplinary literature on self-control and cultivated dispassion in argument, she treats them, not as cultural norms, but as "strategic tools." They are sometimes useful, but displays of hostility, bias, and intemperateness are no less intrinsic to public life.

"Do we want more civil talk than uncivil talk?" she asks. "Of course. But what we need to focus on is how both civility and incivility are structured, contained, and used...Even some incivility can move a policy debate along. Creating a culture of argument, and the thick skin that goes along with it, are long-term projects that will serve democracy well."

Herbst is a professor of public policy at Georgia Tech and the chief academic officer for her state's university system, and in August, she contributed a Views piece to Inside Higher Ed on ways it might be possible for universities to cultivate a "culture of argument" in which the "strategic tools" of civility would be fostered.

But the mass media also play a similar role, as Herbst suggests in her book--with one example in particular standing out:

Among the most popular comics using congressional discourse as evidence of governmental and indeed social incivility is Jon Stewart, host of The Daily Show, a nightly spoof of national news and events. He commonly shows hilariously uncivil moments from the floor of the House or Senate--members berating either each other or the witnesses they have summoned to testify.

This is [a] layered phenomenon where incivility is used as a strategic asset: Members use it against each other or witnesses, for their purposes. Then Stewart grabs it for his metalevel comic purpose, a strategic tool to make us laugh at figures who we had hoped might behave in a more dignified manner appropriate to their positions.

Such comic instruction in the virtues of restraint and dignity would be more encouraging if not for some of the results Herbst reports from a survey of university students in Georgia that she and her colleagues conducted in 2008-9. Their findings suggest a pervasive dread of argument as such, at least in public settings.

She writes that "72 percent of students agreed that it was very important for them always to feel comfortable in class," with "only 7 percent believing comfort not to be an issue." She calls this "evidence for at least one factor underlying the student anxiety that we find: Feeling comfortable and unthreatened intellectually is a value many students share."

To think or believe something is a strictly personal matter. Hence pursuing an argument is taken as very nearly an act of aggression. Herbst cites interview data suggesting that some students regard it is almost impossible to persuade other people of anything. (This is, of course, a self-fulfilling attitude.)

"Contrary to the image of college being a place to 'find oneself' and learn from others," she writes, "a number of students saw the campus as just the opposite--a place where already formed citizens clash, stay with like-minded others, or avoid politics altogether."

The Stewart-Colbert rally is bound to draw young people filled with unhappiness about how the world is going, and I'm not about to begrudge them the right to an interesting weekend. But the anti-ideological spirit of the event is a dead end. The attitude that it's better to stay cool and amused than to risk making arguments or expressing too much ardor--this is not civility. It's timidity.

"Here we are now, entertain us" was a great lyric for a song. As a political slogan, it is decidedly wanting. If someone onstage wants to make Saturday's rally meaningful, perhaps it would be worth quoting the old Wobbly humorist T-Bone Slim: "Wherever you find injustice, the proper form of politeness is attack."