Iraq war veteran Phil Aliff reports on the military's recruiting difficulties--and the resulting pressure to send wounded soldiers back to the front lines of U.S. wars.

IRAQ VETERANS Against the War (IVAW) has begun a campaign to demand that the Pentagon stop deploying wounded soldiers--and instead give these troops the treatment and benefits that they deserve.

IVAW members launched their campaign on October 7 with a march through Washington, D.C., to Walter Reed Medical Center--a hospital that knows scandal well--to send message to the military brass that the deployment of soldiers who suffer from post-traumatic stress disorder (PTSD), traumatic brain injury (TBI), sexual trauma and other wounds is unacceptable.

But why would the military show such callous disregard for the wellbeing of its troops that it would deploy wounded women and men overseas with surprising frequency?

Despite the 2008 economic crisis and the broadly accepted view that the military has been exceeding its recruitment goals due to the grave economic circumstances faced by so many people today, the truth is that the recession has failed to provide the recruitment spike that the Pentagon so desperately needs to continue the occupations of Iraq and Afghanistan. 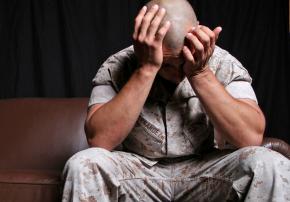 As the war in Afghanistan drags on into its ninth year, the military is experiencing a prolonged crisis of health and recruitment troubles that is growing worse by the day.

A recently released report on military recruitment by the National Priorities Project (NPP) makes clear the crisis that the military is facing in expanding its operations in Afghanistan while continuing its occupation of Iraq, complicating any further escalation of the war effort.

"The economic recession appeared to have minimal impact on FY09 Army recruitment efforts," according to the report. "Only the broadest measure of unemployment showed a modest correlation with recruitment rates, and that was primarily for recruits who identified themselves as white."

The report goes on to say that "fiscal year 2009 finds the fewest active-Army recruits since NPP began its analysis in 2004."

SO HOW has the Department of Defense gotten away with saying that the economic crisis has been "favorable" for the services? The answer is that the military quietly lowered its recruitment goals by 17 percent in 2009, from 75,000 to 65,000, in order to say that the 70,045 people recruited had exceeded their expectations.

The crisis in recruitment has only been exacerbated by the health problems that thousands of veterans are dealing with due to multiple tours. This has led to a pool of unfit soldiers who are seen as a burden by military leaders.

These unfit soldiers are not easily replaced due to the lower number of enlistments--therefore, many soldiers are deploying with combat injuries, while others must go through an arduous process to receive benefits they are entitled to because of their service.

When soldiers are injured in combat or deemed unfit for duty due to health problems, they are sent to Warrior Transition Units (WTUs) to rehab in order to return to duty. Many of these soldiers considered unfit to redeploy are discharged out of the military after a long and stressful medical evaluation process.

The reality is that the WTUs were created in order to legitimize sending soldiers back to combat while wounded, despite the fact that no veteran I know, myself included, has been able to completely recover from PTSD or TBI.

And while the WTUs serve the purpose of addressing the health crisis in the military, they have also been used as a place for unfit soldiers to be passed off by commanders who do not want to deal with the behavioral issues associated with PTSD or TBI. This has been standard operating procedure for years, as the military has tried hard to spin or even bury the effects of war on many soldiers.

According to an internal Pentagon report, the WTUs are "burdened with soldiers placed in them by commanders as an expedient means by which to rid their units of their 'undesirables.' This is counter to the fundamental objective of providing the best possible care for wounded warriors."

The reality is that more than 13,000 soldiers are currently labeled as unfit for deployment, with the number of soldiers left home doubling in the last three years. Since 2007, an average of 135 soldiers per 3,500-person combat brigade has been sidelined due to physical or mental health, behavioral problems, or drug- and alcohol-related issues. The number of soldiers being left behind with disciplinary problems has increased by 43 percent compared to 2007 levels.

All in all, approximately 10 percent of the 116,000 soldiers currently serving in Iraq and Afghanistan have been labeled as "non-deployable."

As Brigadier Gen. Gary Cheek, commander of the Warrior Transition Command for the Army, said to the advocacy group Veterans for Common Sense, "If we are seen as casting away or discarding the young Americans who volunteer to serve, it won't be long before we don't have enough volunteers."

Unfortunately for Brigadier Gen. Cheek and the rest of the military command, that train has already left the station.