A system beyond repair

Cartoonist and columnist Ted Rall's book is a passionate call for struggle and social change--but with deep flaws about how to get there. Leela Yellesetty explains why.

"It shall be unlawful for any person with the intent to cause the overthrow or destruction of any government in the U.S., to print, publish, edit, issue, circulate, sell, distribute or publicly display any written or printed matter advocating, advising or teaching the duty, necessity, desirability or propriety of overthrowing or destroying any government in the United States by force or violence."
--U.S. Code, from a 1940 law still in effect

YOU HAVE to give points for audacity to begin a book advocating the overthrow of the U.S. government with this quote. In his new book The Anti-American Manifesto, political cartoonist and columnist Ted Rall does just that. Perhaps most dangerously, he makes revolution sound like the only reasonable thing to do.

Like the child who proclaimed the emperor had no clothes, Rall's book has the effect of rendering self-evident what is hardly ever mentioned in public, though we all privately know it to be true: this system is broken beyond repair. 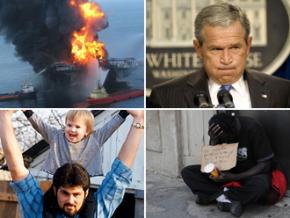 In concise yet sweeping prose, Rall details the series of disasters in recent years that have undermined the long-term viability of the US--from the theft of the 2000 presidential elections to the BP oil spill.

He moves from big-picture issues like downward mobility for all but the wealthiest Americans and the threat of total ecological catastrophe, to personal stories like that of the wrongful execution of Cameron Todd Willingham or communities forced to live with contaminated drinking water.

RALL'S CENTRAL contention is that the U.S. as we know it is on the verge of collapse, much like the Soviet Union was 20 years ago. He points to a number of undeniable parallels: overextended empire, fiscal crisis, rising rampant unemployment, lack of confidence of the citizenry in their government and increasingly out-of-touch rulers with exceptionalist delusions.

According to Rall, all of this points to a historic opportunity to pose a fundamental challenge to the system as a whole, and replace it with a system based on fulfilling human needs instead of profit. He writes:

We have lived our entire lives without a chance to really, truly, fundamentally change the things that bother us about our leaders, society and culture. We live our lives knowing that the world we're born into will be, more or less, the world we die in. We may have made a mark--but we couldn't make a dent. So we've ground our teeth, pinched our faces and borne countless indignities. We've let assholes run the show in their asshole way.

We are so lucky! We finally have a rare, once-in-a-lifetime opportunity to pursue happiness. Thanks to that most precious of revolutionary resources--populist anger--we can throw out all the rules and start from scratch. Sure, it will be hard and bloody and terrifying. But consider the possibilities: a world, to choose an example at random, without the stupid goddamn fucking insurance companies we have now and where everyone gets medical care!

A world without the moronic institution of marriage, an institution nearly everyone hates and almost never really works. A world full of public parks where private golf courses and tennis clubs used to be. Where jobs that don't need to be done can be done away with, where women and people of different races are treated exactly the same and have the same rights no matter what. A world where people have value, in which they are not treated by employers like crusty snot rags to be thrown away.

What do you want? This wasn't true 10 years ago, but it is now: You might actually be able to make it happen.

This is not, however, an inevitable outcome. Although he ignores the role played by mass movements in ultimately bringing down the Soviet Union, Rall is correct in pointing out that at the end of the day the power vacuum there was filled by assorted gangsters and former bureaucrats who presided over widespread hunger and devastation.

In the context of total economic collapse in the U.S., Rall points to the far right as a force that is most prepared to step into the breach:

Right-wing organizational names change, but they amount to the same thing: the reactionary sociopolitical force--the sole force--poised to fill the vacuum when collapse occurs. The scenario outlined by Margaret Atwood's prescient novel The Handmaid's Tale--rednecks in the trenches, hard military men running things, minorities and liberals taken away and massacred, setting the stage for an even more extreme form of laissez-faire corporate capitalism than we're suffering under today--is a fair guess of how a post-U.S. scenario will play out unless we prepare to turn it in another direction.

This book then, is a call to action for everyone who would like to see things go in a different direction. While his tone verges on moralistic at times, Rall counters those who claim that Americans are too scared or apathetic to take part in changing society, and points to the numerous historical examples of revolutionary and near revolutionary situations, including in this country.

"A government may be pleased that its people are broken," he observes, "But they should be scared. People don't stay broken forever."

WHERE RALL falters is in identifying exactly how revolutions succeed, and on the role of violence within them. Rall does a fine job refuting the idea that those who benefit from this system will voluntarily and nonviolently give up their power. He goes on to argue, "It is only the credible threat of violence, the possibility that opposition could escalate to the next level, that makes 'nonviolent' protest effective."

This is a fair enough point, but Rall's fixation on the tactic of using violence distracts him from the main question of what exactly poses a "credible threat" to the system as a whole.

Rall claims those who organize peaceful demonstrations or seek to win reforms within the current system as wasting their time, yet organizations he looks to as models--like the Earth Liberation Front and al-Qaeda--are hardly more effective at challenging the system. In fact, their tactics are counterproductive to the aims of those working for progressive change--and in the case of al-Qaeda, they serve a political agenda that is reactionary in many respects, and certainly quite different from the left's.

This highlights another inconsistency in Rall's account. At the outset, he makes it clear that people should be united around a set of ideas--opposition to wealthy corporations and the government that supports them, and a commitment to equality and human rights as opposed to the right's politics of militarism and scapegoating. But then, toward the end, he notes:

We can only be strong--and decentralized--if we reach out to anyone and everyone who is willing to take on the existing system. If racist skinheads in Idaho have guns and training and resolve, straight-edge anarchists punks from Brooklyn should be willing to cooperate with them...or at least leave them be. Work with anyone. With luck there will be time to split ideological hairs--but only after victory.

For a non-white activist such as myself, the proposal that we ought to work in common cause with racists is off-putting to say the least. Moreover, Rall's elevation of tactics (in this case, violence) above ideology leads him to overlook some fundamental lessons about what makes revolution possible and effective.

First of all, the greatest asset our side has is not the ability to inflict violence, but our strength in numbers. The ruling class, and the state that defends them, will always have more guns. They are able to take isolated outbursts of violence in stride. They fear us because we are the vast majority. We're the ones who work to produce their wealth, not to mention the soldiers who fight in their armies.

It is for this very reason that the imperative for revolutionaries is not to isolate themselves in secretive guerrilla bands, but work to involve greater layers of people in activity. To do so, we cannot counterpose the fight for reforms to revolution, but understand their interconnection.

People who start out fighting for reforms today can become the revolutionaries of tomorrow, as we've seen countless times throughout history. To scorn and abstain from this process only leaves the field open for right-wing or reformist ideas to dominate and derail the revolution Rall so passionately espouses.

Despite these weaknesses, The Anti-American Manifesto deserves to be read and discussed. At its heart is a powerful message that more and more people are ready to hear. As Rall puts it, "I want to kick people in the ass. To get them thinking. To get you thinking. I want you to understand the situation--your situation. I want you to see that revolt is a good idea, and that it has never been more necessary."