The legacy of Karl Marx

In 1983, while the International Socialist Organization--the publisher of SocialistWorker.org--was still a very young group, British socialist Duncan Hallas came to the U.S. to give a national tour of meetings about Karl Marx, in honor of the 100th anniversary of Marx's death.

Many of the meetings were small--often, they were held in living rooms. But those who attended couldn't help but be persuaded by Duncan's presentation. Here, we reprint an article by Duncan that appeared in Socialist Worker in March 1983--one of the best brief introductions to Marxism.

"AROUND YOUR face a web of lies is woven," wrote the English revolutionary poet Percy Bysshe Shelley. Karl Marx put the same idea another way: "The dominant ideas in any society are always the ideas of the ruling class."

So it is not surprising that most people in America think of Karl Marx--if they think of him at all--as a man with horns, hooves and a tail, a villainous and devilish fellow who is responsible for totalitarian dictatorships, mass murder, aggressive wars and pretty well anything unpleasant you can think of.

Of course, if it was just a matter of what the rulers of America and their journalists, TV commentators, professors and preachers have to say, it wouldn't be too hard to convince at least some considerable number of working people in the U.S. of the truth.

The truth is that Marx was an uncompromising fighter against every kind of oppression and exploitation; that his whole life was devoted to the cause of the "self-emancipation of the working class"; and that his ideas are fundamentally important for American workers today. 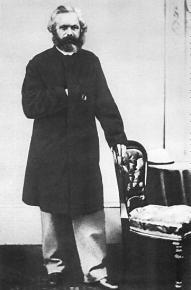 But the rulers of America have powerful allies in the business of portraying Marx and Marxism as enemies of human freedom. [Ex-USSR leader] Yuri Andropov, for one. This ex-super cop, boss of the KGB and the new "Tsar of All the Russians" claims to be a Marxist. So do the murderous Pol Pot of Cambodia; the megalomaniac Kim Il Sung of North Korea; the military dictator of Poland, Gen. Jaruselski; and a whole gallery of other rogues.

All of them have a common interest with the rulers of "the West" in identifying Marx, Marxism and socialism in general with the repulsive and repressive dictatorships that masquerade as "socialist states."

Ronald Reagan has as big an interest as Yuri Andropov in promoting this big lie. And there are no end of "socialist intellectuals" in America, as elsewhere, who help them both by talking about "actually existing socialism."

ACTUALLY, MARXISM is about freedom. It is also about constraint--about the circumstances and conditions that prevent working men and women, the actual producers of all wealth, from controlling the conditions of their own lives and work.

Is all this pie in the sky? The early Christians had just such a vision. Except that they saw it coming in an (imaginary) world above the sky, and they looked to a savior, Lord Jesus, to get them to it. Marx showed how it could be gotten in this world--and not by a supernatural savior, but by the collective efforts of working people themselves.

How? And why hasn't it been done long before? Let us look at the constraints--the things that prevent, deny, limit or cripple our freedom. "A man must eat before he can think," Marx wrote. That is the basic idea.

During most of the course of human history, most people have been compelled to spend most of their time in grinding toil, simply in order to produce enough to support themselves and their children at a pretty miserable standard of living.

People in this condition--and there are hundreds of millions of people still in this condition in the world today--cannot be free in any meaningful sense. They are slaves to the brutal necessity of endless work.

Not only that, but when there is little enough to go around, what bit extra there is has to be concentrated in the hands of a few if there are to be any resources for investment in the future, for science, for art--for everything except the bare necessity of keeping alive. And so we have social classes.

Actual producers, on the one hand. Then those who screw out of the producers all that can be screwed, the ruling class. And some people in the middle, the middle classes.

With classes and class society, we have class struggle. "The history of all hitherto existing societies is the history of class struggles," Marx wrote, "a fight that each time ended either in a revolutionary reconstitution of society at large, or in the common ruin of the contending classes."

The class struggle is the motor of social change. At the same time, it both influences and is influenced by technological change, giving rise to successively different kinds of class societies.

Often, these changes can take a long time. The beginnings of the capitalist class goes way back into the Middle Ages in Europe, and the "revolutionary reconstitution" that led to fully capitalist societies was quite long, drawn out over the 17th, 18th, 19th and 20th centuries.

Capitalism is a very special sort of class society. Marx was enthusiastic about the progress it had made possible. The capitalist class, he wrote, "during its rule of scarcely 100 years has created more massive and more colossal productive forces than have all preceding generations together."

Since that was written, the productive forces have been multiplied many times over. There is no longer any necessary reason for poverty or social classes on a world scale. The qualification about "on the world scale" is important, though.

Capitalism created a world market, an international division of labor and a world economy. That omelet cannot be unscrambled without a catastrophic fall in output, a fall so great that it would destroy the material basis for socialism--highly developed productive forces. That is why Marx and Engels said, "Workers of the world unite"--and that is why real socialists must be internationalists.

POSSIBILITIES AND potentials are one thing. The means to realize them are another. Marx believed that capitalism itself had created the force that could overthrow it and establish a classless society--the modern wage-earning working class.

Socialism, for Marx, as for the International Socialist Organization, is the self-emancipation of the working class, and it is nothing else. There is no socialism without collective, democratic rule by the people who do the work and create the wealth. The claim that countries like Russia and Poland are socialist is simply fraudulent.

Note, too, "self-emancipation." Nobody can replace actual working-class struggle in the fight for socialism. The attempt to do so always leads to reactionary results.

But isn't the working class divided, under the influence of ruling-class ideas--racist, sexist, nationalist ideas? All that is true, and it can be changed in struggle. It is a long, hard and complicated struggle. It is also the only cause worth fighting for.

I have given the barest outline of some of Marx's ideas. The incredible richness of his thought nowadays supports a whole industry--a growth industry until very recently--of commentaries on commentaries on Marx and so on, ad infinitum.

The people who make a living out of this, and not a bad living either, are not Marxists--although most of them think they are. Why not? Because as Marx wrote as a young man, "The philosophers have only interpreted the world in various ways. The point, however, is to change it." To be a Marxist, you have to be a fighter in the cause of the working class, nationally and internationally, as Marx himself was.

One hundred years ago this month, Frederick Engels--Marx's lifelong friend and coworker--spoke these words at the old man's funeral. They cannot be bettered:

For Marx was before all else a revolutionist. His real mission in life was to contribute, in one way or another, to the overthrow of capitalist society...Fighting was his element. And he fought with a passion, a tenacity and a success that few could rival.