Is Israel preparing a new war on Gaza?

Eric Ruder reports on Israel's new attacks on Gaza--and the threat of worse.

HUNDREDS OF PEOPLE marched in Gaza in a funeral procession for three Hamas members killed by Israeli air strikes while driving in a car near Khan Younis on April 1. Ten days earlier on March 22, Israeli air strikes and shelling killed four members of Islamic Jihad east of Gaza City and four civilians--including three youth aged 12, 16 and 17--in two separate attacks. The day before that, 19 Palestinians were wounded in air strikes throughout Gaza.

These are some of the casualties in a sharp escalation in Israel's pounding of the people of Gaza--with the threat of worse to come.

The stepped-up assault is a reflection of the growing sense among Israel's political leadership that dramatic steps are needed to counter the country's increasing isolation in a Middle East roiled by a mass democratic upsurge against U.S.-backed dictators and Israeli allies.

That spirit of popular rebellion has also swept up Palestinian youth and was the impetus behind a March 15 mobilization that crossed the territorial partition of Palestinians--hundreds mobilized in Ramallah, Nablus, Hebron and Bethlehem in the West Bank and thousands gathered in Gaza City. The youth took to the streets to demand unity between Hamas and Fatah in the face of Israel's ongoing belligerence. 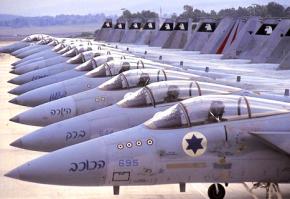 Twitter was ablaze, Facebook groups sprouted like mushrooms, and bloggers typed on overdrive, both from within the occupied Palestinian territories and abroad. These were the weeks and days leading up to the popular demonstrations of March 15, organized by a coalition of Palestinian youth groups across the Gaza Strip and the West Bank, inspired by Arab popular uprisings and infected by the highly contagious freedom/revolution bug sweeping the region.

The goal: a mass mobilization of Palestinians to pressure the Hamas-run government in Gaza, and the Fatah-led Palestinian Authority in the West Bank, to end the four-year-long division.

The largest demonstration was in Gaza City, where many thousands attended, according to a Hamas spokesperson, while in Ramallah, Palestinian youth set up tents the night before the protest, and some participated in hunger strikes.

The following day, Fatah leader and Palestinian Authority President Mahmoud Abbas proposed that he visit Gaza in the interest of dialogue, but neither Fatah nor Hamas view the unity impulse with enthusiasm. Instead, each side hopes to use the call for unity to pursue their respective agendas while simultaneously repressing the protests they hope to channel for their own purposes, according to Israeli journalist Amira Hass.

Fatah has been damaged by the leaking of the Palestine Papers, which document in graphic detail what was already known: that the leadership of the PA had shamefully agreed to historic concessions to Israel while receiving almost nothing in return.

So the PA leadership hoped that "unity protests," which its leadership quietly sanctioned, could be used to deflect blame for the sorry state of affairs onto the imagined "stubbornness" of Hamas to work in a collaborative way with Fatah and the PA--despite the fact that it was Fatah and the PA, in collaboration with Israel, that seized power in a 2007 coup after Hamas won elections the year before.

In addition, the PA has called for municipal elections in July and legislative and presidential elections in September, but Hamas sees this as a bid to sanction by electoral means the PA's grip on power. Hamas also doesn't want to be drawn into what it considers intolerable compromises with Israel on security matters.

IN THE short run, therefore, prospects for overcoming the political rift that has divided the Palestinian people look dim--which is exactly what the Israeli government of Prime Minister Benjamin Netanyahu wants.

"You can't have peace with both Israel and Hamas," Netanyahu warned Abbas on March 28. "Choose peace with Israel."

Netanyahu was responding to Abbas' statement that the PA would be willing to forego $470 million in annual direct financial assistance it receives from the U.S. in order to pursue unity with Hamas. "Of course we need the American money," said Azzam Ahmed, one of Abbas' advisers. "But if they use it as a way of pressuring us, we are ready to relinquish that aid."

Whether the PA truly is willing to give up such a vast sum of money remains to be seen, but it's further proof that the PA feels compelled to respond to the growing clamor from below for unity in the face of Israeli repression--and the regional revolt that makes the PA a target because of its past and present collaboration with the Netanyahu government.

But the Arab uprising has also alarmed Israel's political establishment. Israel's siege of Gaza would have been impossible without the collaboration of Egyptian dictator and U.S. ally Hosni Mubarak. And the revolt shaking Syria's dictatorial regime, long considered an Israeli foe, carries with it a great deal of uncertainty about what might replace it.

Israel is thus using its campaign of terror bombing of Gaza to heighten the strategic and tactical differences among the various Palestinian factions in an effort to forestall any possibility of unity as well as to signal its willingness to rain down more violence on Palestinians.

The mainstream media, especially in the U.S., has cooperated in the effort to portray Israel's assault on Gaza as a matter of self-defense, despite its obviously offensive nature.

Case in point: The bomb detonated at a Jerusalem bus stop on March 23 that killed one and injured 30 more was reported in headline news around the world, but the Israeli shelling that killed four civilians a day earlier received hardly any coverage. Apparently, the death of Palestinian civilians in Gaza doesn't compare to the deaths of civilians inside Israel.

Likewise, the press has devoted acres of coverage to the firing of Qassem rockets from Gaza for the first time in years. The Palestinian rockets generally fall without effect in the desert, but are fired by Palestinian factions into southern Israel as a form of symbolic protest at Israel's violence. Yet Israel's use of far more powerful artillery and air strikes are described as "defensive."

THE GROWING sense of isolation within the Israeli establishment goes beyond its concerns about the regional Arab revolt and growing pressures for Palestinian unity. On the international plane, Israel is also facing mounting challenges.

First, there is the possibility that though post-Mubarak Egypt hasn't yet opened up the Rafah border crossing, this may happen. According to Gaza activist Haidar Eid:

Now the question that begs for an answer is about the future of the Egyptian-Palestinian relationship. The Rafah Crossing is "partially" open for a few passengers, but no goods, food or medicine are allowed. Some Palestinians are turned back every day, and the decision taken by the previous government not to grant Gazans entry via Cairo airport is still in force.

But the opening of the Rafah border would substantially change the situation confronting Israel.

Second, an international flotilla made up of some 20 vessels carrying hundreds of activists from two dozen countries is set to sail in late May in an attempt to break the siege of Gaza. The timing of the flotilla will coincide with last year's May 31 assault on another Gaza-bound flotilla, in which Israeli commandos killed nine human rights activists.

Israeli officials are concerned about the attention that such convoys bring to their siege of Gaza, and they have already begun a campaign to demonize the effort to bring humanitarian aid to Gaza's residents.

On April 1, Netanyahu appealed to UN Secretary-General Ban Ki-Moon to "prove" the UN's commitment to human rights and international law by stopping the flotilla, which he described as a conglomerate of "extreme Islamists that are interested only in provocation."

Netanyahu's tirade against the flotilla is laughable. "We are appalled by this flagrant misrepresentation," reads a statement from U.S. Boat to Gaza, the coalition of activists that is organizing an American vessel for the international flotilla. "The organizers and passengers of the U.S. boat--a committed, nonviolent, human rights mission sailing as part of the international flotilla--are people from all walks of life, among them lawyers, social workers, artists, firefighters, midwives, writers, doctors, filmmakers, retired U.S. army personnel, veterans, women's rights organizers, teachers and nurses."

Rami Abdo, a spokesperson for the European Campaign to End the Siege of Gaza, pointed out Netanyahu's hypocrisy:

We call on the United Nations to remember its purpose as stated in its own charter: to suppress acts of aggression, and to settle disputes in conformity with principles of justice and international law...There is nothing in international law that supports Israel's four-year-long blockade of Gaza, or its past use of violence to stop the delivery of humanitarian shipments. In fact, if the UN intercedes at all, in should be on behalf of the unarmed flotilla, which seeks only to allow the traffic of people and goods in and out of Gaza that is necessary for the economic survival of the 1.6 million residents.

The third challenge facing Israel on an international scale is the growing campaign for boycott, divestment and sanctions (BDS). Around the world, more and more activists, students, intellectuals and artists are refusing to be complicit with Israel's occupation and apartheid regime. This means boycotting Israeli goods, severing ties with Israeli academic and cultural institutions, and putting pressure on corporations and other financial institutions with investments in Israel.

As Pink Floyd's Roger Waters wrote on March 11 about his endorsement of the BDS movement, referring to his song "Another Brick in the Wall:"

In 1980, a song I wrote, "Another Brick in the Wall Part 2," was banned by the government of South Africa because it was being used by black South African children to advocate their right to equal education. That apartheid government imposed a cultural blockade, so to speak, on certain songs, including mine...

Artists were right to refuse to play in South Africa's Sun City resort until apartheid fell and white people and Black people enjoyed equal rights. And we are right to refuse to play in Israel until the day comes--and it surely will come--when the wall of occupation falls and Palestinians live alongside Israelis in the peace, freedom, justice and dignity that they all deserve.