Escalation of a “humanitarian” war

THE U.S.-led military operation in Libya has morphed from the initial imposition of a "no-fly zone," ostensibly to prevent Muammar el-Qaddafi's regime from carrying out a massacre, into an ongoing bombing campaign with no end in sight--and now there's increasing talk of the use of ground forces until Qaddafi is overthrown and a new government, no doubt Western-approved, takes his place.

This transformation of the aims of the intervention--often called "mission creep"--helps to further expose the deception that "humanitarian" concerns is motivating the U.S. or its European allies.

No week goes by without news of another escalation. Among the latest: Washington's deployment of Predator drone aircraft to wreak the same kind of destruction they have brought to Afghanistan and Pakistan.

The use of Special Forces and covert operatives has been old news for some time. More recently, France, Britain and Italy announced that they were each sending military "advisers" to aid the anti-Qaddafi rebels. Anyone familiar with the history of Vietnam and other U.S. military adventures knows what comes next. 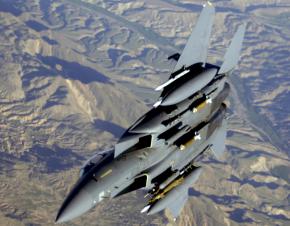 When Barack Obama explained U.S. involvement in a speech a week after the first bombs fell in Libya, he insisted that "broadening our military mission to include regime change would be a mistake."

But by mid-April, Obama had co-signed an op-ed article with British Prime Minister David Cameron and French President Nicolas Sarkozy which argued that "so long as Qaddafi is in power, NATO and its coalition partners must maintain their operations so that civilians remain protected and the pressure on the regime builds. Then a genuine transition from dictatorship to an inclusive constitutional process can really begin, led by a new generation of leaders. For that transition to succeed, Colonel Gaddafi must go, and go for good."

And by the way, the "new generation of leaders" that the U.S. and friends have in mind are people they can "do business with"--members of Libya's elite who have come out against Qaddafi, former officials from the regime, military officers who switched sides, and the like.

The uprising against Qaddafi that began in February was a mass rebellion inspired by the revolutions against dictators in neighboring Tunisia and Egypt. But the West's intervention is aimed at promoting figures and political forces that represent the opposite--ones who will serve the interests of the U.S. and other powerful nations.

Anyone who cares about justice and freedom will have identified with the mass struggle that shook Qaddafi starting in February. But if the U.S. and its allies are responsible for his downfall, the regime that replaces him will be compromised from the start, and the cause of democracy--at the heart of the uprising against Qaddafi--will be set back.

These are the consequences of a military intervention that was sold as a "humanitarian" mission to save civilian lives. Its real aim is becoming clear--the reassertion of Western power in a region that has seen a wave of upheavals and two successful revolutions since the start of this year.

IF ANYONE believed the initial claim that the West's intervention in Libya would be limited, events have surely proven the opposite by now. As of the end of April, rebel fighters and forces loyal to Qaddafi were locked in a protracted war. Battles for disputed cities like Misurata swung back and forth, but neither side had managed a sustained breakthrough.

A New York Times article connected the dots between the stalemated military situation and the latest escalations:

The decision to send military advisers seemed to push [France, Britain and Italy] closer toward the limits of the United Nations Security Council resolution in mid-March authorizing NATO air strikes but specifically "excluding a foreign occupation force of any form on any part of Libyan territory." But the promised deployments also seemed a tacit admission that almost five weeks of air strikes have not been enough to disable Colonel Qaddafi's troops and prevent his loyalists from threatening rebel forces and civilians.

It should also be pointed out that Qaddafi's forces aren't the only ones "threatening civilians." NATO bombings have killed or wounded dozens of civilians and rebels--not to mention the toll among conscript soldiers fighting for the regime.

On April 7, for example, 13 rebel fighters were killed and dozens wounded in a botched NATO air strike on the town of Brega. According to the Daily Mail:

An ambulance was one of the vehicles hit, and three volunteer medical students were among the dead. Doctors said many rebels suffered terrible burns in the attack. One rebel fighter shouted "down, down with NATO" as dozens of vehicles retreated eastwards at speed from the front lines back towards the city of Ajdabiya.

On April 20, at least seven civilians were killed, including women and children, and 18 wounded in a NATO air raid that targeted Khellat Al-Ferjan, a suburb of the capital of Tripoli.

Such casualties are the result of a bombing campaign that has only escalated. This is needed, say Western governments and supporters of the intervention, because of the continued brutality of the Libyan regime, which, for example, reportedly used cluster bombs in the battle for Misurata.

The cluster bomb attacks show the true character of Qaddafi's vile regime. But coming from Western governments, the denunciation of their use is an excuse for further military action that they were preparing for anyway.

Remember the original justification for intervention--the claim that a massacre of rebels and civilians in Benghazi could only be prevented with Western help. But as author and socialist Richard Seymour noted at his blog Lenin's Tomb: "That massacre supposedly averted, the bombing continued, apparently to continue to protect civilians, even though the killing--of civilians, rebels and conscript soldiers--does not seem to have abated."

The Western intervention is also having an effect on the character of the Libyan opposition to Qaddafi. As the weeks have progressed, high-level defectors from Qaddafi's regime, such as Mustafa Abdel-Jalil, a former justice minister, have stepped forward to position themselves as "leaders" of the opposition--even brokering various agreements with Western nations.

When military action began, leading figures among the rebels insisted that while they welcomed a no-fly zone and Western air strikes on military targets, they didn't want the U.S. or European countries to deploy ground troops.

But that position is shifting. As the intelligence consulting business Stratfor reported, Nouri Abdallah Abdel Ati, a member of leadership committee in rebel-held Misurata, reversed his position and called on UN or NATO ground forces to enter the city to defend it from the Qaddafi regime's siege.

Tellingly, Ati's rationale mirrored the justifications put forward for the no-fly zone--just as advocates for Western intervention insisted that the air operation was necessary to stop a slaughter in Benghazi, Ati insisted that Western ground troops were now the only way to stop a massacre in Misurata.

This isn't to say that everyone in the anti-Qaddafi opposition has become a puppet of the West, as some on the left have claimed. But it is certainly true that Western countries are using every opportunity to push to the fore pro-U.S./European figures--while pushing aside anyone who has different ideas.

THE WAR in Libya can't be understood outside the context of other uprisings in the region. The U.S.-led intervention is a way of pulling the reigns on a wave of popular revolutions sweeping the Middle East and North Africa.

At the same time that the "no-fly zone" was imposed in Libya, other regimes in the region facing popular pro-democracy movements dramatically increased repression--most of all in Bahrain. According to Independent journalist Patrick Cockburn:

[T]he Bahraini monarchy, backed by troops from Saudi Arabia and other Gulf states, has brutally but effectively crushed the protesters in the island kingdom. Pro-democracy leaders are in jail or have fled abroad. The majority Shia population is being terrorized by arbitrary arrests, torture, killings, disappearances, sackings, and the destruction of its mosques and religious places.

This crackdown had tacit approval from the U.S.--even as Washington claimed to be using its military machine in Libya to "stop a massacre."

What's taking place in Libya and what's taking place in Bahrain can't be separated--they represent Plan A and Plan B for the U.S. and its European allies. The U.S. government has always been willing to tolerate repression and violence if its interests are served, as they are in Bahrain today. In fact, the U.S. was happy to do business with Qaddafi himself until a few months ago--the Libyan leader reviled today by Barack Obama and Hillary Clinton was a loyal ally in the "war on terror" not long ago.

All this shows that Western intervention was never about supporting the mass opposition to Qaddafi, but harnessing the forces that led to ouster of dictators in Egypt and Tunisia, and that threatened them elsewhere.

The contrast between the character of the Arab revolution and the military operation the West is engaged in couldn't be more obvious, as Richard Seymour points out:

In answer to Tahrir Square, [the U.S. and its European allies] have smoking craters filled with the charred remains of rebels, and conscript soldiers, and civilians and other blameless people who must have seen the joy in Egypt and Tunisia and wished it for themselves. In answer to the turbulent, democratic republic with a vibrant and assertive working class, with its tumult of leftist, Nasserist, Islamist and liberal currents, its "revolution from below," they offer a prolonged civil war, at best culminating in a settlement with Saif [el-Qaddafi] and his sibling. In answer to the popular committees, they have private agreements with regime defectors--not forgetting that, in a sense, the NATO powers prosecuting the aerial war are themselves very recent regime defectors.

With Qaddafi still entrenched in power and rebel forces unable to topple his regime, the stage is set for Washington and other Western powers to broker some sort of settlement. It may include Qaddafi, and it may not, but it will certainly not help in rebuilding a genuine Libyan pro-democracy movement.

U.S. intervention in Libya has nothing to do with humanitarian concerns. Rather, it is about reestablishing the U.S.'s right to intervene militarily whenever Washington feels its interest are threatened--and trying to stem the tide of the Arab revolution by setting a conservative, pro-American regime in place in Libya.