Bringing the world’s solidarity to Gaza

Kevin Ovenden, a leader of the Viva Palestina effort to break the siege of Gaza, looks at the context for the new solidarity initiatives that will be launched this month.

A SECOND, larger aid flotilla is due to sail towards Gaza at the end of May, around the anniversary of Israel's murderous attack on the Mavi Marmara on May 31 last year, in which Israeli commandoes shot dead nine Turkish activists.

Freedom Flotilla 2 is set to be more than twice the size of the first mission, which had six ships. It will comprise hundreds of activists from dozens of countries, east and west. It takes place as unprecedented radical change sweeps the Arab region.

The attack on the Mavi Marmara in international waters was a turning point in the movement of solidarity with the Palestinian people. Far from intimidating efforts to end the siege on Gaza and support the Palestinian struggle, Israel's massacre spurred them on and amplified the calls to isolate apartheid Israel through boycott, divestment and sanctions. Five months after the Mavi Marmara attack, Viva Palestina entered Gaza with a land convoy through the Rafah crossing controlled by Egypt. For the first time, we were able to take in all of our 137 vehicles and aid. 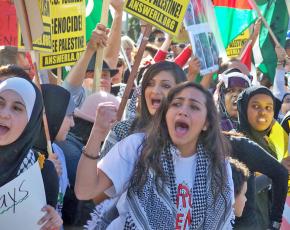 Support for the new flotilla is broader than last year, and the Israeli government of Benjamin Netanyahu is desperate to stop it.

In March, Netanyahu summoned European ambassadors in Tel Aviv and told them that the flotilla had "to be stopped." The U.S. government and Britain have joined Israel in launching a diplomatic offensive at the UN designed to block the flotilla. Israeli media reports that Mossad and military intelligence have been ordered to spy on left-wing organizations in the West as part of the huge effort to stop the ships. Pro-Israeli propagandists are at full tilt attempting to smear the flotilla as a puppet for al-Qaeda or violent jihadism. Netanyahu has refused to rule out a repeat of last year's massacre.

But the threats are more a sign of the isolation of Israel than of its strength. Despite closer relations with the government of Greece over the last two years, Israel has so far failed to secure Greek cooperation in halting the flotilla.

Israel's appeals to the Turkish government, which faces an election on June 12, have also been spurned. The attack on the Mavi Marmara united broad sections of Turkish society against Israel, further undermining what had been a strategically central alliance between the two states under the aegis of the U.S. for decades.

CRUCIALLY, THIS mission to Gaza takes place in profoundly different regional circumstances than in 2010.

Last year, Israel could look to its borders and see two friendly regimes--in Egypt and in Jordan--which were full partners in the suppression of the Palestinians. In a third state, Lebanon, there was the government of Saad Hariri, pro-American and hostile to the national resistance movement led by Hezbollah, which inflicted a military defeat on Israel when it invaded the country in the summer of 2006. On the fourth border was Syria, whose regime was opposed to Israel, but at least a known quantity.

Now, Hariri is out and the national resistance forces in Lebanon are in a stronger position. The Syrian regime faces a raging uprising, but neither the U.S. nor Israel are sure that what might emerge will be amenable to their interests. The Jordanian monarchy faces demands for far-reaching reform and renewed activism, including from the two-thirds of its population that isn't Palestinian.

Above all, Israel's key ally--without whom the siege on the people of Gaza could not have been maintained--Hosni Mubarak has fallen to the most important revolution in the Arab region thus far. There is now mounting pressure in Egypt to change the 34-year policy of collaboration with Israel.

The issue of Palestine was a cornerstone of the decade-long political renaissance that preceded the eruption in Tahrir Square this year. The first political space for many years carved out under the Mubarak dictatorship was 10 years ago when students and young people took to the streets in support of the Al-Aqsa Intifada in Palestine. The sense of national shame that Mubarak closed the Rafah border just as Israel launched Operation Cast Lead on the people of Gaza starting in December 2008 increased the discontent at domestic repression and immiseration.

Thus, even the transitional military regime in Cairo is feeling the pressure to end the siege on Gaza. Egyptian Foreign Minister Nabil Al-Arabi told the BBC early in April, "We have made it very clear from the beginning of this government that has now been in power for about six weeks, that we are turning a new page in our foreign relations. We are reviewing all our major interests in foreign policy."

There are demands both to open the Rafah crossing fully and to end the sale of natural gas to Israel at heavily subsidized prices. The government and mainstream opposition forces have declared that they will respect the Camp David peace treaty with Israel. But there is considerable room for maneuver for any Egyptian government to respond to pressure to support the Palestinians without formally rescinding Camp David. As Max Rodenbeck, chief Middle East writer for The Economist, says:

Almost anyone, whether it's a pro-Western liberal, or some sort of Islamist representative of the Muslim Brotherhood, will want to make Egypt more independent and readopt the role of strong regional player. I imagine we will see a little bit of distancing from the U.S., probably more chill in the Egypt-Israel relationship.

THE YOUTH-led Arab revolutionary wave is also having an impact in Palestine itself--in Gaza, in the West Bank and in pre-1948 Palestine. Tens of thousands of young people have taken to the streets demanding national unity forged in the spirit of the new politics born in the revolutions in Tunisia and Egypt.

Their ire has been particularly focused at the corrupted administration on Mahmoud Abbas, president of the Palestinian Authority. He in turn has felt forced to engage more seriously, with moves towards reconciliation with Hamas, which won Palestinian elections in 2006, but was targeted by Israel and the U.S. with the siege of Gaza.

The dependence of Abbas' regime on the U.S. and Israel remains acute. But in a further sign of vulnerability, Israel and its propagandists, such as American Israel Political Action Committee, are warning that they can no longer rely on Abbas, rehearsing the line of 10 years ago that "Israel does not have a partner for peace."

Many questions remain. Certainly, both the U.S. and Israel are attempting to regain the initiative following the blow they suffered with the fall of Mubarak. They want to carve out from the Arab upsurge a process designed to transform it into pro-Western regime change, which will bring to power governments that will normalize relations with Israel.

So Israeli President Shimon Peres recently adopted a different tack from Netanyahu, who cleaved to Mubarak up to the last minute. Peres wrote that he was in favor of the "Arab spring"--Israeli political leaders prefer not to use the word revolution--and of democracy in the Middle East. By democracy, he meant liberal capitalism and states that would accept Israel's dispossession of the Palestinians.

But pulling that off--through military intervention directly in Libya, by the use of proxy forces against pro-democracy demonstrations in Bahrain and by cohering pro-Western forces across the region--is fraught with difficulties, because the main driving force of the upheaval is in opposition to Western and Israeli interests.

In Egypt, just 14 percent of the population has a positive view of the U.S., and fewer still of Israel. The U.S. dilemma is that its attempts to pose as a friend of the popular Arab movements are hamstrung by its craven support for Israel. The U.S. recently wielded its veto yet again at the UN to block a resolution condemning illegal settlement building.

It is into this mix that the flotilla is sailing. It was already apparent last year that the context for solidarity with the Palestinians was changing. Not only was there a wider base for the movement in the West, as Israel frittered away its ideological and political capital, but there were also signs of growing activism within the Arab region.

Events now have vindicated the strategic view that to be most effective, the Palestinian solidarity movement should connect with wider social and political forces in the Middle East. Support for the flotilla provides a vital opportunity to do just that.

It is not only in North America and Europe that people stand poised to take action to support the flotilla. They are also preparing in Jordan, Egypt and across the Arab region.

Solidarity with the Palestinians now is not only a blow against Israel's policies. It is in a very direct sense an act of furthering the revolutionary processes in the Middle East that hold out the prospect of liberation.