What do you get when a multi-billionaire runs your city? Maybe the question should really be: What does he get? Danny Katch explains.

IS THERE some sort of global rebellion committee taking applications for the next Egypt or Wisconsin or Spain? If so, I'd like to submit a bid for New York City. I think we meet all the qualifications:

Inequality so extreme that a handful of elites dine on $400 sushi while a quarter of the city can barely afford food? Check.

A generation of youth caught between mass unemployment and crippling student debt? Of course.

A security force that each day harasses thousands of innocent members of oppressed racial communities? We have that, too!

But what should really seal the deal for New York City is our autocrat: Mayor Michael Bloomberg.

I know he's not a military strongman like Hosni Mubarak or a creepy Ayn Rand zealot like Scott Walker. But dig this:

A Bloomberg aide once told Richistan author Robert Frank that "to the mayor, politics is seen as a highly effective form of philanthropy." Highly effective indeed. In his 10 years of "public service," the man has more than quadrupled his wealth.

Of course, the section of the population to whom philanthropy has traditionally been directed--people who are not already billionaires--hasn't fared quite so well. Poverty and homelessness were on the rise even during the years of the Wall Street boom.

Now, of course, New York City has the same budget crisis as everywhere else. And like the rest of the country, the only real crisis is that rich people and corporations barely pay any taxes.

But the New York situation is a little more bizarre. Here, we have a Mayor Bloomberg who plans to close senior centers, firehouses and day-care slots because he can't find any of the money that Citizen Bloomberg seems to inhale with every breath. It's an impressive job of keeping one's work and personal life separate.

Or could he suffer from a rare form of daily memory loss? Maybe every night as his limo takes him down 5th Avenue to his four-story Upper East Side townhouse, he looks out at the most expensive zip code in America and thinks, "Note to self: Make these people pay taxes. And don't forget this time!" 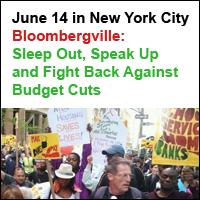 It sounds far-fetched, but I don't know how else to explain Bloomberg's recent comments about the 20,000 protesters who marched through Wall Street demanding that the bankers pay for the budget crisis. Bloomberg said of the demonstrators:

Rather than being downtown protesting, it might have been more useful if they were up in Albany with our administration protesting the $6 billion in cutbacks at the state level that really hurt this city.

Interesting tactical advice. I suppose that's how Bloomberg made his fortune. While all the suckers tried to get rich at Goldman Sachs, he was saying, "Forget Wall Street. The real money is in Albany. They've got minor league basketball and everything."

SOME WILL say that it's unfair to bring up Bloomberg's private wealth. After all, the argument goes, he didn't steal his money from the city coffers.

This is technically true since in America, a rich person can, in fact, be found guilty of robbery as long as his victims are also rich (shame on you Bernie Madoff) or if he actually wears a ski mask while taking your money. But the mayor has done neither of those things.

B. Bloomberg LP makes its money by leasing a terminal with financial data and analytical tools commonly known as a "Bloomberg."

C. Subscriptions for Bloomberg terminals have doubled over the past decade.

Got that? It's pretty straightforward, even if the name thing is a little creepy. But here's what's odd. Ten years ago, Bloomberg LP was a large company with a good share of the financial media services market. It's almost impossible in that situation to see such a dramatic expansion--unless the entire industry is going through some sort of fraudulently inflated...oh.

Goldman Sachs had 13,000 employees in 1999. Today, it employs 35,000, and many of those new employees probably found a Bloomberg on their desk. Multiply this trend around the financial world, and it's clear than most of the mayor's recent wealth has come from the essentially counterfeit money that banks and hedge funds were producing until the 2008 crash.

The only reason why the number of employees (and Bloombergs) at Goldman and other banks didn't go back to their 1999 levels--or down to zero--is that the government replaced all the Wall Street fake money with taxpayer real money.

Is it still unfair to say that Michael Bloomberg has taken his wealth from the people of New York? Consider this:

The mayor gets testy whenever it's suggested that bankers make up the budget deficit. Last year, he warned that hedge funds would immediately move to Connecticut if their tax rate were increased, since these firms only consist of "a bunch of desks with terminals on them."

What he doesn't mention was that if the finance industry actually had to pay taxes at the same rate normal people do, they might have to cut down on their Bloombergs--each of which costs $18,000 per year with no volume discount.

For the mayor of New York City to own a company that serves Wall Street is a conflict of interest that might have even made Dick Cheney and Haliburton pause. And yet this guy had the support of most New Yorkers until recently.

THIS IS especially ironic since liberal New Yorkers love to sadly shake their heads at those Tea Party rubes in the heartland: How can they be so easily fooled that they vote against their own economic interest?

Homophobia and death-panel mania may not work as well in New York City. But we have our own form of cultural backwardness: the blind worship of rich people. Alaska produces Sarah Palin. We produce Donald Trump.

For many New Yorkers, Bloomberg's wealth quadrupling didn't mean he was screwing us. It showed that he was getting four times smarter, four times more effective, maybe even four times sexier (OK, I never heard that one.)

The city owes the rest of the country an apology because it unleashed a national trend of the billionaire crusader, a phenomena that rests on three shaky premises.

1. Billionaires don't care about money. There's a grain of truth here. Because he doesn't have to worry about campaign contributions or clinging to a political career, Bloomberg has taken refreshingly non-cowardly stands for gay marriage and against Islamophobic lunacy. But there's something strange about the idea that the best way to get money out of politics is to only allow people with lots of money into politics.

2. Billionaires are so rich they can buy objectivity. Most of us are blinded by self-interest--we want to keep our job, our pension, our local hospital, etc. Only those without such petty needs can rise above society and just do what's right. (Note: If you think rich people actually have more self-interest in the form of their billions of dollars of investments, you have already forgotten that billionaires don't care about money. Duh.)

3. Billionaires run government like they run businesses. This one is completely true. The problem is that regular New Yorkers hoped in this analogy that they would be shareholders in NYC Inc. But they've turned out to be the frenzied workers and ripped-off customers instead.

Take the Department of Education. Teachers nervously face an almost 10 percent workforce reduction as they prepare students for finals tests. Parents are still grappling with the news that their kid's increased test scores have turned out to be a scam.

The Department's managers and consultants, meanwhile, have done their part for the children by looting millions of dollars through embezzlement, secret outsourcing schemes and even starting a hedge fund on city time.

Speaking of city time, have you heard about CityTime? It's a fancy new time-clock system that requires city employees to submit to palm scans when they enter and leave work. Bloomberg can now rest easy knowing that greedy workers can't steal 10 minutes on a Friday afternoon.

This efficiency is slightly negated, however, by the fact that the makers of CityTime charged the city $700 million for a project that was supposed to cost $60 million.

BLOOMBERG ISN'T still supposed to be mayor. Under New York City's term-limit law, his time was up in November 2009. As late as the summer of that year, most of the political establishment opposed repealing term limits.

Then the mayor took out his $18 billion ray gun. He held private meetings with newspaper publishers and City Council members, each of whom emerged issuing glassy-eyed statements about the importance of the mayor's continued leadership during these troubled economic blah blah blah...

Bloomberg got the term limits overturned, outspent his Democratic opponent by almost 20 to 1, and used his massive "philanthropy" to buy off dozens of community leaders and non-profits.

Amazingly, he only won re-election by 5 percent of the vote. Bloomberg's brazen power play horrified New Yorkers, many of whom finally realized the danger of having the richest man in town run City Hall. His poll numbers have been dropping ever since. 2009 turned out to be a turning point for Bloomberg, a classic case of hubris.

But if you're Bloomberg, who gives a shit? You now own the political establishment. Veteran New York journalist Wayne Barrett described Bloomberg's unprecedented control over the city soon after his re-election:

The richest man in New York is also, for the first time, the mayor of the city and one of its grandest philanthropists, making it almost impossible for the rest of us to talk to him without wondering at some level of consciousness: "Can I get a slice of this guy?" His personal and public outlays have flooded the city's bloodstream for years now, and few are so uninterested in a possible transfusion of their own that they will take him on.

So the only people left to challenge Bloomberg are the peons, the ones who don't have enough juice to be bought off. Those are the people who gathered in Tahrir Square because the entire establishment was subservient to Mubarak, and who are gathering still in Spanish cities because the mainstream parties sold them out.

There's a group of folks like that in New York who plan to set up camp outside City Hall on June 14 and demand that Bloomberg stop his budget cuts and tax the rich.

Imagine if the people took over Wall Street. In Egypt, they chanted, "The people want the regime to fall!" In Spain, they call for "Real democracy now!" New Yorkers would probably make the main slogan something like "Give us our money, you m#@&ther#$9er!"

Think I'm wrong? There's only one way to find out.