A crisis caused by bigotry

Rebekah Ward reports on a looming crisis for Georgia agricultural producers caused by the anti-immigrant law HB 87--and the Republican governor's sickening solution.

SOMETHING IS rotten in Georgia, and it's not just the crops in the field.

Blueberries, peanuts, corn and watermelons--these agricultural goods aren't going to be harvested if workers aren't found to pick them.

A Georgia Department of Agriculture investigation of labor shortages commissioned by Gov. Nathan Deal found that in order save this year's harvest, more than 11,000 jobs needed to be filled.

The state's labor shortage is a result of draconian anti-immigrant House Bill 87 (HB 87), which, when it passed in March, criminalized the undocumented and their friends and neighbors in an unprecedented way. The bill includes provisions that would punish people who transport undocumented immigrants and would empower people to sue local and state government officials who don't enforce state immigration laws.

Since HB 87's passage, Alabama has followed suit, and even upped the ante, calling on public schools to report children in their classrooms for deportation if they can't prove they're citizens. 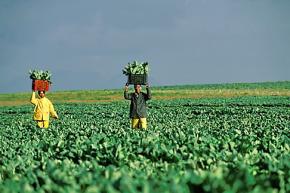 HB 87 has almost certainly already caused a flood of migration out of Georgia. Although most evidence of families picking up and leaving the state is anecdotal, it is overwhelming. Youth involved in the immigrant rights movement are desperately searching for a way to stay in Georgia until they complete high school, while their families move to other, less threatening states. Public elementary and middle schools are re-evaluating their numbers for the fall.

Maria, a waitress at an Atlanta-area Mexican restaurant, said, "People have already left based on rumors. For example, in a single night, five of my coworkers, dishwashers and kitchen staff, left Georgia based on the fear. They have been here a while, almost five years, and they decided to move to a safer state, almost overnight."

HB 87 is tearing apart families and entire communities across Georgia.

The Georgia Department of Agriculture's survey is the first to begin to document the systemic impact of the law. It found that the labor shortage is primarily found in larger farms, with over 250 acres to harvest this summer.

The study also found that the most common crop that was reported to need more workers for harvest was cotton. Apparently, new pests have appeared in cotton farms that require labor-intensive herbicide applications.

So, with more than 54,000 new unemployment claims in May alone, according to the Georgia Department of Labor, what is the basis of this labor shortage? Why don't people from all over Georgia flock to these wonderful jobs picking cotton in Georgia sun. The answer is in the question itself.

According to the farmers' responses to the survey, 60 percent of these jobs pay less than $11 an hour. Over two-thirds of the jobs are also temporary, with expected employment ranging from one to six months.

Only around a third of the jobs offer any form of workers' compensation, despite the high rates of heat stroke found in this industry. Although the hours are long and the locations often remote, less than a quarter of the openings offer housing.

NATHAN DEAL has come up with a sickening solution for the labor problems caused by HB 87. He will use parolees, whose conditions of parole include "following all instructions from the parole officer, (and) gainfully working." He and Gary Black, Georgia's agriculture commissioner, are working closely with the Georgia Department of Corrections to fill the cotton fields of Georgia with "voluntary" workers.

Over 60 percent of the 26,000 people on parole in Georgia are considered "non-white," according to the Board of Parole--compared to about 40 percent of Georgia's population as a whole. An older study by the Georgia Board of Parole and Pardons found that Georgians are twice as likely (10.2 percent) to go to prison at some point in their life as all U.S. citizens (5.1 percent). A Black man in Georgia stands a 38.5 percent chance of going to prison, compared to the 28.5 percent of the national average.

Given the disgusting history of chattel slavery in Georgia, it's shocking that Gov. Deal would be so openly racist as to suggest this as a way forward for Georgia agriculture. However, this is in keeping with his support for racial profiling enshrined in HB 87.

Deal's callous disregard for human dignity was made even clearer by comments he made during an interview with Georgia Public Radio. When asked about the success of a pilot for the parole-forced-labor program, he claimed, "We're getting some great reports."

The journalist asked Deal to comment on news stories reporting that a substantial number of probationers are not even able to last a whole day under the conditions in the field. Deal replied:

Well, there's no question that it is difficult and hard work. Um, but I think you know that when you go into the field. But our reports are that a substantial number of them were actually able to finish the work and, um, and it's something like conditioning yourself. You have to be able to work up to the conditions that are required to be in the fields on a regular basis.

Many immigrant rights activists are almost self-congratulatory over the effect of HB 87 on Georgia agriculture. But while it's true that this shortage is revealing the vital role that immigrant labor played in maintaining farms in Georgia, those on the left should be drawing deeper conclusions.

First, the state's primary role in serving business interests is revealed, yet again.

Second, if the governor's plan lasts until December, when the cotton from Georgian fields is harvested, it will signal the first time in a long time that this task was largely performed by an un-free Black workforce. This fact may aid the comparison of an underpaid Black workforce to an underpaid Latino workforce, and help break through the divide-and-conquer tactics used in the South to pit Black and Brown workers against one another.

Finally, the fear of checkpoints and deportation that has been heightened by the passage of HB 87 existed prior to this law. It is the ongoing terrorization of a segment of Georgia's workforce that filled these jobs in the first place.

Georgia agribusiness isn't on the side of immigrant rights in its opposition to HB 87. This industry wants a workforce that is systematically scapegoated by the state in order to turn profits. This is how the category of "illegal" aids some segments of the elite, and why agribusiness would never support a just solution, full legal status for all undocumented workers.

As we continue the struggle against HB 87, we should remember that we cannot fight only for a return to the time before the passage of this law. We should set our sights much higher on jobs with justice for all.