The wild plunges of international markets in the past weeks are related to deeper economic and financial problems. Petrino DiLeo and Alan Maass explain how.

PANIC RETURNED to Wall Street and financial markets worldwide in the first weeks of August. The specter of several new financial crises and fears that the economies of the U.S. and Europe could slump back into recession led to the biggest drop in the U.S. stock market since 2008, and worse than that in other countries.

Many factors are driving the worldwide market mayhem, including the fiasco in Washington over raising the U.S. government's debt ceiling and the spreading "sovereign debt crisis" in Europe.

But looming behind them all are the deep-seated weaknesses in the world economy more than two years into the "recovery" following the Great Recession--and the failure of the responses to the crisis by the U.S. and other powerful governments.

In the U.S., the bipartisan deal to raise the debt ceiling and head off default--at the cost of draconian budget cuts, and the threat of worse to come for cherished programs like Social Security and Medicare--was supposed to save the world economy, according to the commentators. The "serious people" in Washington and on Wall Street were breathing a sigh of relief, we were told. 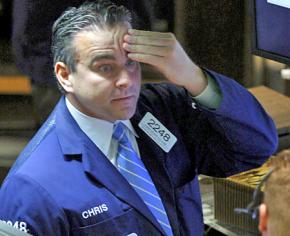 But as the deal was passed by both houses of Congresses and signed by Barack Obama, the stock market began a dramatic weeklong fall. One reason for this was anticipation of the downgrading of the U.S. government's credit rating by the Standard & Poor's agency. On Friday, August 5, the agency took away the AAA status that classifies U.S. government bonds as among the safest of all investments.

Wall Street wasn't reacting, as millions of people around the U.S. are, to the drastic scale of the cuts. On the contrary, the credit downgrade reflects the financial elite's assessment that the deal arranged between Congress and the White House is too modest.

On Monday, August 8, Barack Obama held a press conference intended to "calm the markets," but the best he could muster was the claim that the U.S. would always be a "AAA country." The stock market immediately lost hundred of points off the Dow Jones index.

The next day, the U.S. Federal Reserve released a statement that promised the country's central bank would keep short-term interest rates at near 0 percent through 2013--likewise designed to demonstrate that policymakers are concerned about weak economic growth. But the stock market fell hundreds more points immediately after the announcement, before rebounding dramatically in the other direction.

Pundits celebrated Tuesday's overall upswing in the stock market as a sign that the chaos was over. But those gains were wiped out the very next day with another plunge equal to nearly 5 percent of the total value of the stock market, according to the Dow Jones index.

BEHIND THE ups and downs, this week's market roller-coaster ride is a telling sign of how little confidence the ruling class has in the U.S. political elite to come up with answers to the economic crisis.

For their part, the Republicans--always known as the first party of big business--had no hesitation about driving the world to the brink of the economic cataclysm that would have resulted from a default. Barack Obama and the Democrats, meanwhile, pose as "responsible stewards" of the system against the Republican maniacs. But as Obama proved again this week, when it comes to proposals for reviving the economy, they have nothing more than empty rhetoric.

As for the Federal Reserve, the promise to keep interest rates at near 0 percent through 2013 only draws attention to the fact that rates have been this low for years already--with no sign of any hoped-for increase in corporate investment. The Fed has already used virtually every tool it has to counter an economic slump, so its promises to do more of the same don't exactly inspire optimism.

Several European countries--Greece, Portugal, Ireland, Spain and Italy, known collectively as the PIIGS--are facing what's called a "sovereign debt crisis." Greece, for example, has a current debt of more than $500 billion for a country of just 12 million people. Each national debt crisis in Europe is exaggerated by the fact that 12 countries share a common currency, the euro.

The European Central Bank and the continent's chief economic powers, Germany and France, have been arranging bailouts--hundreds of billions in loans, in return for drastic austerity measures that have savaged working-class living standards--for the PIIGS. But each rescue seems to be followed by another, more expensive problem.

And now there are questions about the rescuers. The big drop on the international markets on Wednesday was caused by trouble in France. For one thing, French banks have a lot of loans to Greece and other countries at risk of default. Moreover, the price tag for a worst-case scenario in Europe--where all of the troubled economies, including Spain and Italy, need saving--would be well over $1 trillion. Outlays on that scale would likely push France at least into its own sovereign debt crisis.

The common thread between these problems specific to the U.S. and Europe is the role of governments in dealing with the economy. At one level, the early August turmoil in the financial markets represents the financial world's vote of no confidence in the various political establishments and their proposals--or lack thereof--to fix the economy. And that's true whether the governments are run by liberal or center-left parties or by the conservatives.

LOOMING BEHIND these immediate factors is the ongoing crisis of the economy on both continents--and the threat that a second leg of the recession could be near.

In the U.S., the Commerce Department's Bureau of Economic Analysis (BEA) reported at the end of July that the U.S. economy grew at an annualized rate of 1.3 percent in the second quarter of the year--April through June. The BEA also revised its figure for first-quarter growth to a microscopic 0.4 percent. For the full year through the end of June, the U.S. economy grew by just 1.6 percent--an incredibly low figure for a supposed recovery.

What's more, the BEA revised its statistics from throughout the recession--showing that the downturn was even deeper than previously thought. The new numbers show that at the depth of the recession in the last three months of 2008, economic output fell at an 8.9 percent clip, a downward revision of 25 percent from previous statistics.

And the bad news isn't limited to looking backwards. Current economic indicators are also throwing up warning signs. The Institute for Supply Management's (ISM) index of manufacturing activity came in at 50.9 in July--a decrease of 4.4 percentage points from the previous month. Any reading over 50 indicates that the manufacturing sector is expanding, but the index has been falling in recent months and could turn negative. In fact, the ISM's New Orders Index came in at 49.2--"indicating contraction for the first time since June of 2009," the ISM reported.

Also, consumer spending dropped in June for the first time in 20 months. And the Small Business Optimism index has fallen for five consecutive months.

Then there's the employment picture, which remains bleak.

The Bureau of Labor Statistics reported on August 5 that the overall unemployment rate for July dropped to 9.1 percent, down from its cyclical peak of 10.2 percent from October 2009. Yet there has barely been a ripple in the sea of joblessness caused by the Great Recession.

From high point to low point, the total number of non-farm employees in the U.S. shrank by 8.75 million by the time the jobs market bottomed out in February 2010. Since then, that number has risen by 1.9 million--less than one-quarter of what's needed to make up the loss. At this pace, it could take up to a decade to get back to the previous employment high--assuming the economy doesn't go back into recession and start shedding jobs again.

And on top of that, the official employment statistics are understated. Anyone who works as little as an hour a week is counted as "employed"--so 8.4 million underemployed workers with part-time jobs, but who want full-time work, are counted as having jobs.

In addition, there are 1.1 million "discouraged" workers and 2.8 million "marginally attached" workers in the job force, but not counted as unemployed. Add those workers into the mix, and the underemployment rate jumps to 16.3 percent. Lastly, there are 6.6 million people who are "not in the labor force," according to the government, but who want a job--they aren't counted in any of the government's statistics.

ALL OF this will only be made worse by the relentless drive for austerity demanded by business and accepted by both major political parties in the U.S. According to analysts at JPMorgan Chase, the plans for government cutbacks already in place--not counting the ones hatched in the debt ceiling deal--will knock 0.3 percent off gross domestic product growth in 2011 and 1.4 percent in 2012.

Political leaders ought to be proposing measures to create jobs--most effectively of all, by devoting government funds to projects such as infrastructure redevelopment. But almost no one in Congress will suggest any such thing. Instead, the bipartisan consensus is for cuts, cuts and more cuts, even though this threatens to stifle what little job growth has taken place. And at the state level, the austerity agenda has ruled for years already, whether carried out by Republican union-busters like Wisconsin Gov. Scott Walker or Democratic "friends of labor" like New York Gov. Andrew Cuomo.

The same problem is evident in Europe. Greece, for example, is caught in what's known as a "debt trap." The savage austerity measures demanded as a condition of Europe's bailouts have pitched the country into a deeper recession, which has led to less and less revenue coming back to the government, making the country all the more dependent on further bailouts.

There is no happy ending to this story. At best, there will be a long period of weak growth and high unemployment as individuals and banks pay down the excessive levels of debt accumulated in the bubble years. At worst, the global economy will be plunged back into recession next year as the U.S. goes backwards and the euro comes apart at the seams. The second, gloomier scenario, looks a lot more likely now than it did a week ago.

Why? Because there is no international cooperation. There are plans for austerity but no plans for growth. Even countries that could borrow money for fiscal stimulus packages are reluctant to do so.

The only "happy ending" has been for corporations and the wealthy. Profits rates have been restored to pre-crisis levels and then some--and corporations are sitting on an unprecedented amount of cash. The net worth of the richest individuals is growing again. No wonder, then, that, luxury consumption is the most dynamic part of the retail sector, according to the New York Times.

Yet these are the very people who are demanding more and more sacrifices from the rest of us in the name of fiscal responsibility.

The stock-market gyrations of August are further evidence of the mayhem of capitalism--a system that demands workers pay, while profits roll in for corporations and Wall Street.