Helen Redmond reports on the inhumane conditions in America's "supermax" prisons--and the toll that they take on the people locked up inside.

People walked by and asked, "How are you doing?" I answered, "How am I supposed to be doing? That's the craziest question I ever heard." The mental health people asked, "Are you having any suicidal ideation? What are you thinking right now?" I said, "Where the fuck am I? That's what I'm thinking. Ain't this America?"
--Brian Nelson, on his transfer to Tamms supermax prison in Illinois. He was held chained and naked in a holding cell.

THE RECENT hunger strike at Pelican Bay supermax prison in California exposed for three weeks the carefully planned and executed barbarism of life in supermax America.

The utter desperation of the human cargo behind the concertina wire, buried deep inside concrete coffins was gut-wrenching and heart-breaking. Hunger strikes are a tactic of last resort for the completely subjugated--a slow, painful, nonflammable version of self-immolation.

Brian Nelson, a survivor of 12 years in solitary confinement at Tamms supermax prison in Illinois, understands the conditions that drove the men in Pelican Bay to stop eating. Distraught and anxious, Nelson paced in his cell for over 10 hours a day, causing severe, bloody blisters on the soles of his feet. He tried to hang himself. 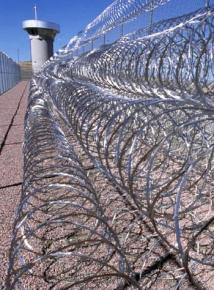 Nelson went on a hunger strike in 2000 for 42 days with four other prisoners to protest many of the same conditions that exist at Pelican Bay. The demands of Tamm's hunger strikers were similar, too: better food, shoes with arches, appropriate clothing, access to education, transfers out for inmates with mental illness, bilingual staff, and abolition of the "renunciation policy" (this is the "debriefing policy" related to gangs that Pelican Bay prisoners demanded be abolished).

Guards tried to break the hunger strike at Tamms by leaving carts of fried chicken and freshly baked chocolate chip cookies on the wing. The delicious smells didn't break Nelson.

SUPERMAX PRISONERS' daily lives are chock full of alienating and undignified experiences, so empty of positive human interaction that thousands are willing to risk death rather than continue to endure such inhumane conditions. That alone speaks volumes about the reality of life in supermax prisons.

One of the most humiliating aspects of life for inmates is the constant strip-searches--forced to be naked, ordered to bend over by guards and spread their buttocks apart to have their anus inspected for contraband while coughing. Strip searches are the old normal. The photos of nude prisoners in Abu Ghraib in Iraq shocked the world, but to be stripped naked for hours or even days is standard operating procedure in supermaxes.

Nelson explained, "Every time you leave your cell, you're strip searched...They do this to degrade and shock you...Sometimes the guards would make homosexual comments like 'Hey baby, spread your cheeks.'"

They tell you to open your mouth, raise your tongue, hold your hands up. They go through your fingers and toes, and tell you to turn around and spread your cheeks up against the chuckhole...It's degrading to have two other human beings looking at you like you're some kind of specimen. It is extremely degrading.

Prisoners on suicide watch are routinely left naked in their cells. And inmates have been punished by "caging"--where they're held naked or partially clothed in outdoor holding cages in inclement weather.

There is no pretense of "rehabilitation" in supermax prisons; the purpose is harsh punishment. Prisoners endure super-sized portions of psychic punishment as a result of strict and prolonged solitary confinement. Inmates are confined for 23 to 24 hours a day, every day, in cells that measure 7-by-12 feet. It is psychological torture.

Supermax prisons are intended to isolate prisoners and deny human contact. Cannon said, "Everything you do, you do alone...It was designed to break you mentally by not allowing you to have another human being right there with you who you can interact with."

This extreme environment of sensory deprivation and social seclusion makes men go mad. Supermax prisons are filled with diagnosed mentally ill inmates. Laurie Jo Reynolds, an organizer for the Tamms Ten Year Committee and a Soros Justice Fellow, believes, "It is a form of insanity to put people in a place that provokes mental illness...Either they went in crazy, or they go crazy once they are there."

Some prisoners resort to cutting their flesh: A form of self-mutilation that results in thick scarring. Small shavings of concrete, plastic "sporks" or paper clips are used to cut and cause bleeding to arms, legs and genitals. Cannon remembers some prisoners cutting themselves "just to feel something...They were willing to do anything to get out of their cell and into the infirmary to be around other people."

Nelson recalled an inmate who continually tightened a piece of string around his finger. It became gangrenous and was amputated. Men who injured themselves told him, "I need the pain to feel real."

"Gassing" is also common in supermax prisons. It is a word used to describe prisoners throwing urine and feces at guards. Gassing is treated as a security threat and is met with excessive force by a tactical team.

Prison mental health staff label inmates who engage in cutting and gassing as "malingering" and "acting out," not as suffering from mental illness. And yet there is decades of indisputable, well-documented evidence that solitary confinement causes mental breakdown and self-injurious behavior.

Dr. Terry A. Kupers, a psychologist who has conducted hundreds of prisoner assessments in supermax prisons, explained in an article in the Belleville News-Democrat, "Twenty-three hours a day alone in a cell causes many inmates to brutally attack themselves...In the adult male population of the United States, self-mutilation occurs only in solitary confinement. It's an epidemic across the country. They're not faking."

SUPERMAX PRISONS are modern, high-tech, taxpayer-funded concentration camps. The architecture is a twisted blend of "fascist stripped classical" and "functionalist" designed to facilitate the One Flew Over the Cuckoo's Nest punishment of inmates.

They are located in rural areas, in small, conservative, majority white towns desperate for jobs. Pelican Bay was built on an abandoned logging site and is completely cut off from its surroundings. Tamms supermax is located in the far corner of Illinois in a village with a population of 724 people. The remote location of supermax prisons keeps them hidden and away from public scrutiny and protest. Media are not allowed in.

On the perimeter of supermax prisons loom large and imposing guard towers with gun turrets and floodlights that resemble German flak towers.

The interior of supermax prisons is built on the architectural principles of isolation, surveillance and über-control. Doors and gates are controlled electronically. A panoptic central guard tower is encircled by prisoner "pods," and closed-circuit TV cameras allow guards to see into every cell. Privacy is nonexistent.

Architects have partnered with penal authorities to create austere, hermetically sealed dungeons devoid of natural light, color and beauty. They are milieus full of monotony, guaranteed to provoke mental despair.

These architects who build prisons call themselves "justice" architects. In response to that outrageous claim and to the boom in prison building, the group Architects/Designers/Planners for Social Responsibility launched a prison design boycott. The organization acknowledges the barbaric consequences of supermax incarceration and encourages architects to sign a pledge not to do any work that "furthers the construction of prisons or jails."

Daily routines in supermax prisons are rigidly controlled. Prison guards and administration have total power and domination over every aspect of prisoners lives through a series of capricious rules and regulations that, if broken, result in "tickets," loss of privileges or additional prison time. Inmate's bodies, belongings and cells are subjected to relentless searches, inspection and video monitoring.

Authorities decide the number of showers per week (one to five) and the amount of time (15 minutes), exercise time (one hour), clothes, TV/radio access, food and visitation--and can withdraw medication. Inmates aren't allowed to speak to other inmates when outside their cells. If prisoners stray off the yellow line walking to the shower or exercise cage, they can be shot.

The hunger strikers in Pelican Bay sent the world a distress signal: a supermax SOS. They are buried alive but still able to fight against the most appalling prison conditions imaginable. Those of us on the outside have a moral and ethical responsibility to hear and answer that call and fight to shut every supermax prison down.