Rahm vs. CTU: Round one

CAN WORKERS' solidarity overcome a billionaire-funded, union-busting effort led by one of the country's best-connected and most aggressive politicians?

That's the question facing teachers in Chicago--and their answer, to quote the mayor's old boss, is: "Yes, we can."

From union delegate meetings, to school and community forums and rallies, the Chicago Teachers Union (CTU) is preparing for the biggest fight of its nearly 75-year history by reaching out to parents, community groups and the rest of organized labor--while Chicago Mayor Rahm Emanuel uses budget deficits, bribes and bullying to try to divide and conquer the union.

The mayor is making it clear that he has friends in high places--and that they're on his side. Emanuel's push for the immediate addition of 90 minutes to the school day at Chicago elementary schools was the focus of a high-profile visit to the city September 5 by Education Secretary Arne Duncan, who endorsed the mayor's effort. Chicago's school day is a "badge of shame," Duncan said at the event. 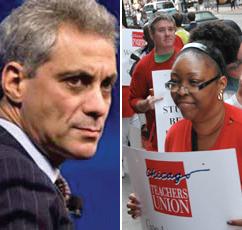 Duncan didn't seem to think it was shameful for Emanuel to offer teachers a bonus of about 2 percent of the average teacher's annual pay--for a workday that would be 29 percent longer. Nor did it trouble him that Emanuel's handpicked school board voted in June to rescind the 4 percent raise contractually due to all teachers. The board justified the canceled raise as necessary to close a budget deficit that Chicago Public Schools (CPS) claimed was $720 million. Then it voted to increase the pay of Schools CEO Jean-Claude Brizard and other top CPS officials.

But Duncan, in town as part of the Department of Education's "Back to School" tour, wasn't the only heavy hitter on stage at a highly publicized panel discussion at a Chicago high school.

Dick Durbin, the second-ranking Democratic leader in the U.S. Senate, was in the audience, and on stage with Emanuel and Duncan was Illinois Gov. Pat Quinn. So was Robin Steans, who had a stint as a public school teacher before using her family's inherited wealth to run Advance Illinois, a corporate-driven "school reform" outfit on a mission to crush teachers' unions.

All the panelists sang the praises of Senate Bill (SB) 7, the Illinois "school reform" legislation passed earlier this year. With Emanuel twisting arms in the state capital of Springfield and Steans dangling the prospect of big campaign contributions, the legislature approved SB7, which weakened teacher tenure, placed severe limits on the CTU's right to strike and allowed CPS to impose a longer school day in the 2012-2013 school year, leaving the question of compensation for the extra time to contract negotiations.

CTU President Karen Lewis initially backed SB7, but the union's executive board and House of Delegates reversed that decision. Lewis said that last-minute changes had been made to the bill without her knowledge.

Then Jonah Edelman, the boss of Stand for Children, another well-funded pro-corporate "reform" outfit, was caught on video bragging about how SB7 was intended from the beginning to cripple the CTU.

BUT EMANUEL couldn't wait until next year to implement the longer day. The mayor and Chicago Schools CEO Jean-Claude Brizard launched a "longer school day pioneer" program that not only dangled a bonus in front of elementary school teachers, but also promised $150,000 to any school that adopted the plan immediately.

As of September 19, teachers at just nine of the city's nearly 500 elementary schools had voted to waive the portion of the union contract that governs the school day.

The union responded to Emanuel and Brizard's "pioneer" plan by pointing out that the bonus pay was an insult added to the injury of the canceled raises. As Karen Lewis pointed out in a statement:

For a teacher earning $57,000 a year, the increase would mean a mere $3.41 an hour, less than minimum wage. Teachers on average already work 21 hours more than they are paid for; we grade papers, create lesson plans, confer with parents and counsel our students. There will be little time for us to do any of that.

Emanuel's aim was to try to humiliate the CTU on the eve of contract negotiations by sending a message that the union's new reform leadership, which swept into office in an election last year, couldn't sway the rank and file.

Then the mayor made it personal, subjecting the CTU's Lewis to a profanity-filled, finger-pointing outburst at a meeting to discuss the longer school day.

In this atmosphere, it came as no surprise that the CTU and its affiliate, the Illinois Federation of Teachers (IFT), boycotted the Duncan-Emanuel event that celebrated SB7 as an example of collaboration between unions, school officials and legislators.

It was left to an official of the Illinois Education Association to provide a labor fig leaf to a celebration of union-busting, Democrat-style. Duncan, for example, told reporters that he thought teachers salaries' should be doubled--giving an empty liberal veneer to the education secretary's endorsement of Emanuel's work-more-for-chump-change plan.

At the press conference following the September 9 event, Emanuel swaggered even more than usual. As a result of SB7, he said, it wasn't question of if there would be a longer school day in Chicago, but when.

The Chicago Tribune took up where the mayor left off a few days later by publishing a racist cartoon depicting Karen Lewis seated in the corner of room with a dunce cap on.

EMANUEL'S STRATEGY to break the CTU is obvious: create an atmosphere in which he can portray the struggle as one of greedy teachers against needy kids.

The Chicago City Council obliged the mayor with a unanimous vote September 8 for a resolution on the longer school day--proving that the alderman are just as obedient to Boss Emanuel as they were to his predecessor, Richard M. Daley.

Also following City Hall's script for school reform are a host of organizations controlled by the Democratic machine that pass themselves off as community organizations. One of them, the United Neighborhood Organization (UNO), based in Latino neighborhoods, is itself a major operator of nonunion charter schools.

To fend off the attack on the longer school day, the CTU has filed grievances and challenged the move at the Illinois Educational Labor Relations Board. But the real action is elsewhere: Union organizers and staff are working to build contract committees in every school, and on September 14, CTU delegates voted to approve what one union insider calls a "war budget." Anger has been building among the 30,000 members of the CTU since their promised raises were canceled, and everyone can see the confrontation looming ahead.

But what shape will the fight take, and when? Under SB7, the union must get 75 percent of its members to vote in favor of a strike. That shouldn't be too difficult to achieve, given the teachers' angry sentiments. But the law also requires a lengthy process of mediation and a cooling-off period lasting at least six months before a legal strike can take place.

Now that the school board has canceled teachers' raises, the CTU can start the clock running at any time--and if the union does so in the next few weeks, a strike could take place legally before the end of the school year. The timing is still in question, but given the intensity of Emanuel's attacks, the question of a strike--to borrow the mayor's formulation about a longer school day--may not be "if," but "when."

For now, the CTU is countering Emanuel's manufactured community support with rank-and-file organizing and genuine grassroots outreach to Chicago communities. That strategy was highlighted August 31 at a cookout and rally outside the home of Chicago teacher Sue Garza, daughter of Ed Sadlowski, the leader of the reform movement in the United Steelworkers in the 1970s.

Garza and her brother, a labor organizer in Wisconsin--also named Ed Sadlowski--brought together CTU members and leaders of the Madison labor revolt of earlier this year. Among those participating were Madison firefighters' leader Joe Conway, building trades official Eric Cobb, and an official of the Madison teachers' union.

In her speech to the rally of 500 people--most of them rank-and-file teachers from schools on the city's East Side near the old steel mills--Karen Lewis made it clear that class questions were central to the teachers' clash with Emanuel and his backers:

Let's talk to every single neighbor and tell them, 'Help us, stand with us.' The time is now, because they're coming after us, they're coming strong, and it's not just here. It's not just in Wisconsin. It's the entire country. They want to destroy publicly funded public education. Don't think for a minute that these people care about our children. They never have, and all of a sudden they're interested in it?

In fact, the CTU has been linking the teachers' struggles to the broader fight to defend public education and social services. The union has repeatedly challenged the mayor to keep his promises to reform Chicago's tax increment financing (TIF) system, which diverts money from schools into a development slush fund. The CTU is also demanding that banks refinance their loan agreements with CPS to a lower interest rate.

Expanding on these themes will be central to the CTU's effort to mobilize its members and sympathizers. With working people in Chicago reeling from the recession and a sluggish economic recovery, the union's appeal for support based on a common struggle for economic justice will resonate widely.

The potential for such a popular struggle is clear, given the experience of the labor mobilization in Madison in February and March and the solidarity on display during the Verizon strike in August and other labor struggles.

The ongoing strike by teachers in Tacoma, Wash.--in defiance of a judge's order--may be a harbinger of a high-stakes battle in the nation's third-largest city. Rahm Emanuel could be in for a much bigger fight than he bargained for.