The deaths caused by the U.S. in Iraq are "untold" by the media, writes Danny Katch.

OVER A million Iraqis are dead from America's war.

One million is a "Grandpa, what did you do to stop it?" number. It's a number that undeniably puts the American state among history's villains. Those who are not willing or able to accept this are physically unable to retain the fact that over a million Iraqis are dead. Their brains expel it like a foreign germ.

Noam Chomsky once wrote that the "sign of a truly totalitarian culture is that important truths simply lack cognitive meaning and are interpretable only at the level of 'Fuck You,' so they can then elicit a perfectly predictable torrent of abuse in response."

That pretty much sums up the how the media reacted to the one million figure in 2007 when it was announced by the British polling firm Opinion Research Business (ORB). (In fact, the firm estimated 1,220,580 Iraqis had died, confirming and updating a separate study done the year before by researchers from Johns Hopkins University and published in the Lancet medical journal.) 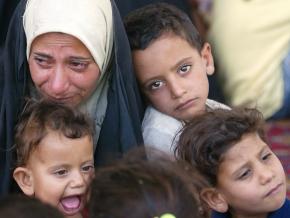 Take Kevin O'Brien, deputy editor of the Cleveland Plain Dealer. Upon receiving a media advisory about the findings from ORB, whose clients include the British Conservative Party and Morgan Stanley, this was his response: "Please remove me from your mailing list and spare me your transparent propaganda."

"WE DON'T do body counts," Gen. Tommy Franks once famously answered a reporter's question about civilian casualties. He's not alone.

Amid all the somber reflections last month about the end of the Iraq War, a specific number of how many Iraqis had died was rarely given. Reporters often described the tally of Iraqi casualties as an "untold number," a somber-sounding phrase that reflects the same level of journalistic effort used for finding the death toll of squirrels in a forest fire.

This line from Reuter's Mary Milliken was typical: "[T]oday was about remembering the untold number of Iraqis and nearly 4,500 Americans who died in the war."

How many Americans died, Mary? Nearly 4,500. And how many Iraqis? Oh, you know, lots. A whole bunch.

"Untold number" implies that there are no available estimates of just how many Iraqis died. In fact there are two: an organization called Iraq Body Count (IBC) has tallied about 110,000 deaths, based on media accounts and health ministry records. IBC admits that its total is surely too low since occupying armies and sectarian civil wars are not known for meticulous bookkeeping, but it disputes the higher figures from ORB and Johns Hopkins.

Methodology debates aside, there are numbers on hand to describe the Iraqi death toll. They are "untold" only by reporters like Kevin O'Brien and Mary Milliken.

The silence around numbers is not so much a conspiracy as a reflection of the fact that some information is simply incompatible with the American imperial mindset.

Consider a different grisly number from a previous decade: According to the United Nations Children Fund, 500,000 Iraqi children died in the 1990s due to United Nations sanctions (rammed through by the U.S.) that barred medicines and other basic necessities from entering the country.

In 2000, the UN humanitarian aid coordinator resigned to protest the sanctions, two years after his predecessor had done the same. Both of these life-long diplomats later used the word "genocide" to describe the American policy.

If you are ignorant of or forgot this information, you are not alone. So did the people who planned the Iraq War. There is no other way to explain the fact that America's war and occupation strategy rested on the expectation that its soldiers would be greeted as liberators by the parents of half a million dead children. (The sanctions, by the way, weren't imposed in the Kurdish north, the only part in Iraq that did not offer massive resistance to the U.S. occupation.)

It's not by chance that many of the most committed antiwar activists are revolutionaries of one stripe or another. We are able to process and comprehend the staggering evil been done to Iraq because we are radicals. And vice versa.

Revolutionaries face the ironic conventional wisdom that because we want to see society radically transformed, we are ends-justifies-the-means fanatics who think nothing of how much blood might be spilled in the process.

But it was then-Secretary of State Madeleine Albright who said of the deaths of 500,000 Iraqi children that "the price is worth it." And it is current Defense Secretary Leon Panetta who used the exact same phrase recently regarding the second invasion and occupation of Iraq.

Those are the words of a fanatical order that anyone should be proud to oppose with all of their being.