Our stand against NATO

Malalai Joya is a courageous opponent of the U.S. occupation of Afghanistan, of the corrupt regime presided over by President Hamid Karzai--and of the Taliban and other conservative Islamist forces battling U.S. and Afghan government troops. She was elected to parliament in 2005, but was suspended after she denounced the presence of representatives she called "warlords" and "war criminals."

Since then, Joya has become known the world over as an opponent of war and imperialism. She was scheduled to speak at the People's Summit in Chicago on May 12-13 and then participate in demonstrations against the summit of the North Atlantic Treaty Organization (NATO)--the international force that occupies Afghanistan under the direction of the U.S. Joya was ill and unable to travel to Chicago, but she sent a statement that was read at the People's Summit. The statement was published at the Guardian website.

THOUSANDS OF protesters are expected to descend on Chicago this weekend for NATO's annual summit, where Afghanistan will be at the top of the agenda. It promises to be one of the most important antiwar demonstrations of our generation. I will be unable to travel to attend, but from here in Kabul, I can tell you that the whole country will be watching Chicago this weekend.

The protesters remind us that the U.S. government is not representative of the U.S. people. It's encouraging to see so many willing to take action and stand up against this unjust, disastrous war.

Recently, Barack Obama travelled to Kabul to meet Afghanistan's so-called President Hamid Karzai. Both leaders used this meeting to pretend that they are ending this war when they are really trying to prolong it. Obama knows that the American people are turning against the war, and both men also know that the Afghan people are against not only the war, but the continued occupation of their country.

Both claim that the war will end in 2014, while saying simultaneously that American troops will remain in some capacity until 2024. As 2024 nears, they will probably say they mean to remain in Afghanistan until 2034. 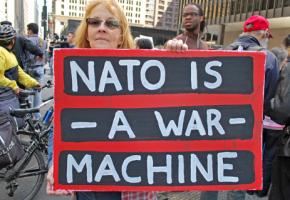 The reality is that the U.S. and its NATO allies plan to dominate Afghanistan and the larger region militarily for the next generation. Their reasoning is geostrategic: to control our energy and mineral resources, and maintain military superiority over China and other competitors.

No one can believe leaders like Obama who say they are working for peace even as they continue the bombings, night raids and drone attacks that kill civilians every week--sometimes every day--in Afghanistan, Pakistan and elsewhere.

This weekend's protests will likely face repression. Police in Chicago have reportedly spent $1 million on riot control equipment ahead of the summit. But it's vital that people take to the streets to raise their voices. Here in Afghanistan, peace and women's rights activists risk their lives to hold protests against both the occupation and the fundamentalist warlords.

President Obama lived in Chicago for many years; it is practically his hometown. Mine is in Afghanistan's remote Farah province, where I was elected as an MP in 2005, at the age of 26. Because I spoke out and denounced the occupation, the warlords and the Taliban, I faced threats and assassination attempts--and was kicked out of parliament in 2007.

Because I was banished, I was unable to stand in parliament and condemn a NATO bombing in May 2009 that killed about 150 people in Farah. Most of the victims of this massacre were women and children. I would like to ask Obama and his wife Michelle how they would feel if their own daughters were killed in this senseless and brutal manner?

We have many problems in Afghanistan--fundamentalism, warlords, the Taliban--but we will have a better chance to solve them if we have our self-determination, our freedom, our independence. NATO's bombs will never deliver democracy and justice to Afghanistan or any other country.

The voices of protest in the streets of Chicago will be seen and heard in Kabul, and in Farah, and eventually in every corner of Afghanistan. As we say here, the truth is like the sun: when it comes out, nothing can block it.

I'm sorry I cannot be in Chicago this weekend physically. But I, along with millions of other Afghans, will be there in heart and in spirit, standing in solidarity with the demand that NATO withdraw its troops from Afghanistan.

First published in the Guardian.