Alan Maass reports on the unofficial results of Egypt's presidential runoff--and on a new declaration by the military that grants it sweeping political powers.

THE RESULTS of the presidential runoff were still in doubt on Monday morning in Egypt, as this story was being published.

But whichever of the two candidates wins, the real victors are the country's military rulers, who have asserted their iron control--first, with a court ruling last week that dissolved parliament, and then, after the polls closed on Sunday, with an "addendum" to Egypt's interim constitution that steals most political power for the generals.

Many people described the June 14 ruling by the Supreme Constitutional Court--which also boosted the campaign of the regime's favored candidate, Ahmed Shafiq, in addition to moving against parliament--as a "judicial coup." The day before, the generals re-imposed large parts of the emergency law in force during the Mubarak dictatorship, including granting the military the authority to arrest civilians.

But the Sunday maneuver by the Supreme Council of the Armed Forces (SCAF) was an even bolder grab for power. "With the new Constitutional Declaration issued by SCAF tonight, Egypt has completed its full transition into a military dictatorship," human rights activist Hossam Bahgat wrote on Twitter. 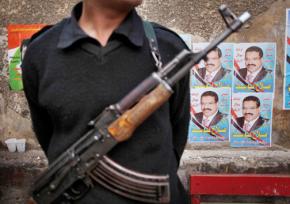 AS OF 9 a.m. in Cairo on Monday, June 18, the Muslim Brotherhood's candidate Mohamed Morsi held a narrow lead over Shafiq, the last prime minister under Hosni Mubarak, according to the count kept by Ahram Online. But official results weren't expected for at least a day or two.

What isn't in dispute is that turnout for the runoff was low. A committee monitoring the vote for Egypt's lawyers syndicate said in a statement that participation didn't exceed 15 percent on the first day of elections. And voting was even lighter on the second day, according to press reports--until a final surge after the polls were kept open for several additional hours.

Some left organizations had called for a boycott of the runoff in protest, but the low participation was the result of mass disgust at the whole election charade--especially after the June 14 court decision that overturned a law to exclude Shafiq from the election, and that nullified one-third of the elections for parliament, which were dominated by the Muslim Brotherhood.

"Why should I vote?" Hussein, a Cairo taxi driver, said to a reporter for Ahram Online. "My vote doesn't count and the picture is very clear--they want Shafiq, and they are going to make him the next president, whoever we vote for."

But the SCAF's power grab on Sunday night shows that Egypt's rulers were also preparing for an election they couldn't steal for Shafiq--by making sure the president has few, if any, powers.

The "annex" to the interim constitution allows the SCAF to take over the law-making responsibilities of the parliament until a new one is elected, and it gives retroactive constitutional sanction to the military's power to arrest civilians, decreed by the Interior Ministry last week. The president's control of the armed forces is subject to the veto of the SCAF.

The SCAF also gave itself broad new powers over the writing of a new constitution. The generals now have the power to appoint a new Constituent Assembly to write the document--state news media outlets were reporting that a 100-member panel had already been named.

The SCAF can contest any part of the constitution if "it is in opposition to the goals of the revolution or its basic principles...or the common principles of Egypt's past constitutions." Any such challenges have to be resolved by the assembly in 15 days, or the final word goes to the Supreme Constitutional Court--the same body, packed with men appointed by Mubarak, that did the military's dirty work in dispersing parliament last week.

So whoever is declared the official winner of the presidential runoff, the SCAF has moved to secure its power. As one writer commented on Twitter: "Ladies and gents, relax, our next president will have as much governing powers as the queen of England."

The Muslim Brotherhood responded to the SCAF constitutional "annex" with a statement that it was "null and unconstitutional," and Hussein Ibrahim, the head of the Brotherhood representatives in parliament, declared that he would not "give in to a coup d'état," and that the body would meet "as usual" on Tuesday. This sets up a possible showdown with the military, which ordered the doors locked to the building where the parliament meets.

But the Brotherhood is in a more difficult position to stand up to the SCAF after having accepted the legitimacy of last week's constitutional court ruling on Shafiq's participation in the election. Morsi--in defiance of liberal and left forces that called on the Brotherhood to challenge the rulings--said he respected the decision of the court to allow Shafiq to stay in the runoff.

THE BITTER anger toward Shafiq among supporters of the January 25 Revolution that toppled Hosni Mubarak was easy to find during the two days of voting.

At a polling station in Mansoura, north of Cairo, for example, a group of men held pictures of the martyrs who died during the revolt last year against Mubarak. "We will not forget the responsibility [of Shafiq] in the murder of our comrades in the revolution," one man said. Another added: "If Shafiq becomes president, we will haunt him every step of the way until we get rid of him, one way or another."

But like many others, Sara also resisted supporting the Muslim Brotherhood candidate. One reason for the hesitation to vote for Morsi, even to try to stop Shafiq, is the Brotherhood's commitment to political Islamism, including conservative positions on neoliberal economic "reforms" and social policies, such as the rights of women. Plus, the Brotherhood has many times taken the side of the military rulers over the past 16 months since Mubarak's fall, against those struggling for democracy.

Both Morsi and Shafiq benefited from separate surges of support in the days just before the first round of the presidential vote in May. They barely defeated two candidates associated with revolution--Hamdeen Sabahi of the Nassarist Dignity Party, and Abdel Moneim Aboul Fotouh, a dissident former leader of the Brotherhood known for his liberal views--whose combined total dwarfed those of Morsi or Shafiq.

When the runoff between Morsi and Shafiq was confirmed, many supporters of the revolution committed to voting for Morsi in order to stop the old regime from putting its candidate into the presidency. That sentiment continued through the election. "People tell me to vote for Shafiq," a woman janitor told Ahram Online. "But if I do, my social class--the underprivileged--will pay the price."

But others--including Hamdeen Sabahi, the third-place finisher in the first round--held out from endorsing any candidate. Some left activists organized a campaign for people to boycott--or go to the polls, but spoil their ballot--in order to expose the runoff as illegitimate.

The military's determination to secure its power, regardless of who won, became clear with the June 14 constitutional court decision, which not only confirmed Shafiq's spot in the runoff, but declared the elections for parliament--carried out under rules endorsed by the military and the Brotherhood last year--unconstitutional.

The ruling was a gauntlet flung down at the feet of the Brotherhood, which dominated parliamentary elections held in December and January, along with more hardline Islamist parties known as Salafists. But Morsi and the Brotherhood--believing they could still win the runoff vote--announced they would accept the ruling. They rejected pleas from activists in pro-democracy organizations to withdraw from the runoff and confront the military's threats with protests.

As one activist said to the Wall Street Journal, "I told them, 'Let's assume Morsi wins, what kind of power will he have?' The military has the keys to the whole process."

That question is posed even more starkly after the Sunday announcement that the SCAF has unilaterally rewritten the constitution. Even if Morsi holds onto his runoff lead in the unofficial results and is allowed to assume the presidency, he will be boxed in by the regime, unable to exercise much power. The Brotherhood's dominant position in parliament is gone, too--unless it enters into an open confrontation with the regime.

With the runoff finished, the Brotherhood may take a tougher line. But it has a history of compromising with the regime. The Brotherhood supported the military's proposals for an interim constitution in the first place, back in March 2011. Again and again over the past months, it has collaborated with the SCAF, even against demonstrations supported by its own rank-and-file supporters. Egyptian socialists described the Brotherhood as seeking to become the "political arm" of the military rulers.

Unless it challenges the regime now, that is exactly what it will become.

As for the left-wing organizations that have been at the heart of the struggle, from the revolt against Mubarak through the bloody battles for democracy in the months since, there are intense discussions and debates about how to explain the outcome of the presidential elections, and what to do next. To be sure, the military's latest moves will feed a sense of disorientation and demoralization.

But whatever moves Egypt's military rulers have made, they can't deliver on the most basic issues at the heart of the rebellion--democracy and freedom, or economic and social justice. As Hossam el-Hamalawy wrote for the Jadaliyya website, even as the regime was regaining the initiative, working-class action, including strikes, "witnessed repeated direct confrontations with the army, anti-military junta sentiments and chants, as well as friction with the Muslim Brotherhood or Salafi members of parliament who tried to diffuse industrial actions in their area, or did not bother to intervene to help the workers in the first place."

Building on such working-class struggles will be central to the reviving the revolutionary movement--after all, they were at the heart of the uprising in January and February 2011, including the final days when Mubarak was finally forced out.

International solidarity will play an important role, too. With the military's expanded powers of arrest, pro-democracy organizers, unionists and the left will continue to be targets of repression. We need to stand ready to support our sisters and brothers in the next phase of an ongoing struggle that continues to reverberate across the world.