Lee Sustar answers questions about the worsening crisis in the eurozone.

THE EUROPEAN debt crisis keeps getting worse despite a series of attempts to bail out debt-wracked countries in the eurozone, the 17 countries that share a common currency.

As Greece was preparing to hold elections on June 17 that ultimately returned pro-austerity parties to office, Spain became the new crisis flashpoint. Banks hobbled by a housing bust turned to the European bailout funds for a credit line of $125 billion.

But because those funds will be added to the total amount it owes, the Spanish government's debt could hit 90 percent of gross domestic product, further weakening an economy suffering 24 percent unemployment and already expected to shrink by 1.7 percent this year. Spain recently had to pay a 7 percent interest rate to borrow over 10 years, compared to the 1.5 percent or less paid by Germany.

Desperate to buy time to avert a financial meltdown, eurozone country leaders were set to meet June 28 to propose a long-term plan for some sort of banking and/or fiscal union to shore up weaker economies. But Germany Chancellor Angela Merkel remained adamant that her country couldn't afford to bankroll the effort. 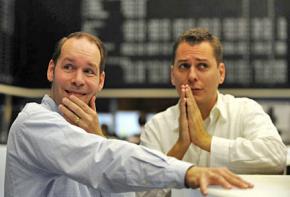 THE GREEK elections put pro-austerity parties into office. Why hasn't that satisfied the financial markets?

NO DOUBT Angela Merkel, French President François Hollande and other eurozone leaders were relieved to see that the anti-austerity SYRIZA party narrowly failed to win the Greek parliamentary elections on June 17. While SYRIZA leaders stated that they were committed to staying in the euro, they also pledged to repudiate the Memorandum--the agreement that has obliged Greece to slash wages, raise taxes and carry out devastating cuts in social spending.

The new prime minister, Antonis Samaras, leader of the conservative New Democracy party, also promised voters that he'd get a better deal than the one currently being enforced by the so-called troika of the European Union (EU), the European Central Bank (ECB) and International Monetary Fund (IMF).

Samaras is likely to get a face-saving deal--a longer schedule for paying debts, for example. Nevertheless, under the Memorandum, Greece remains obliged to eliminate 150,000 public sector jobs--a huge number for a country of just 11 million people.

Samaras says he'll do that through attrition. But the troika is sure insist on a faster pace--and that will mean more resistance by Greek unions and the left, whose growth is reflected in the rise of SYRIZA.

Then there's the practical impossibility of the Greek economy recovering fast enough to make a dent in its debt. Even after an agreement with creditors that wiped out $173 billion of its debt, the 15 percent contraction of the Greek economy since 2007 means that total debt is still rising as a percentage of the country's gross domestic product (GDP).

In short, the Greek crisis is far from over.

THE DEBT crisis has been going on for two years. Why haven't European governments been able to solve it?

THE IMMEDIATE problem is that European governments of all political stripes and sizes moved in to bail out their financial systems following the crash of 2008.

Small economies like Iceland and Ireland developed huge banking sectors during the boom years, and by rescuing those banks with taxpayer money, the governments fell into a fiscal black hole. Greece and Portugal, despite having smaller banking sectors, were also burdened by financial bailouts and loans made during boom years when interest rates were uniformly low across the eurozone.

In Spain, government finances were relatively healthy, and the banks appeared strong when the crash came--but once the housing market collapsed, banks began imploding and seeking government bailouts. The economy tanked, leading to reduced tax revenues and a corresponding spike in the Spanish government's deficit. In Italy, years of slow growth set the stage for a surge in government debt when the recession hit in 2007.

The economic cure for this crisis--driven by Merkel and former French President Nicholas Sarkozy--was austerity. Sweeping budget cuts, mass layoffs of government employees, wage reductions and higher taxes were imposed to make it possible for governments to repay their debts.

According to the austerity crowd, a brief period of pain would be followed by a recovery as lower government debt and reduced labor costs spurred new capital investment. Instead, austerity measures have only exacerbated the economic downturn.

Now, the deepening recession in Europe--along with a sharp slowdown in China and weak growth in the U.S.--has only made the debt trap harder to escape. At best, Europe will grind along in a new recession. At worst, the exit of Greece from the euro or a worsening debt crisis in Spain or Italy could trigger a financial crash and an even deeper slump in Europe and internationally.

SOME ANALYSTS say that Germany is holding back on a common European plan to refinance debts and stimulate the economy until Merkel can wrest more concessions from the countries that need the money--like surrendering control of banking oversight and even taxing and spending authorities to eurozone bodies in which Germany would predominate. According to this thinking, Merkel is bluffing when she says "Germany's strength is not infinite."

In fact, there is good reason to take Merkel at her word. After all, German GDP is $3.2 trillion, compared to a $9.5 trillion GDP for the eurozone and $12.9 trillion for the entire European Union. Merkel may find herself taking up the old slogan of the Third World debt crisis: "Can't pay, won't pay."

WHY CAN'T Germany work out a deal with other big countries to implement a banking union or some kind of common fiscal policies that would share the debt burdens of the eurozone?

THAT'S WHAT people like financier George Soros and New York Times columnist Paul Krugman are calling for. But they fail to see something basic about capitalism that Marxists noted long ago--a contradiction between a world economy on the one hand and the division of the world into nation-states on the other.

As the Russian revolutionary Leon Trotsky noted in a 1926 speech on the U.S. and Europe, "The productive forces created by capitalism could no longer be contained within the framework of the social forms of capitalism, including the framework of national states. Hence the war"--the First World War.

Of course, the Second World War followed, again centered in Europe. The EU and the eurozone were designed to prevent further conflict and create a peaceful and gradual way to economic unity. But when the crisis hit, the interests of national ruling classes pull in different directions.

For Merkel, a growth plan hasn't been a priority in Germany until recently. But even if Germany's economic slowdown jolts Merkel into action, she may not agree on the remedy sought by Hollande in France, where the sluggish recovery is giving way to a new slump.

There's also the problem of the long-term shift in the world economic balance of power--that is, the rise of China and other newly industrializing countries that are competing with European countries.

THE BAILOUT of the Spanish banks was supposed to restore confidence in that country's economy, but Spain's borrowing situation got worse. Why?

THE SPANISH government is now on the hook for that additional debt. And since loans from the new $626 billion European Stability Mechanism must be repaid ahead of all other creditors, the big banks and bond funds are at greater risk of getting stiffed if they make further loans to the Spanish government.

That's why the Spanish government has to pay through the nose to borrow. Yet the Spanish government simply can't afford to keep paying such high rates of interests indefinitely. If it does, it will wind up like Greece--shut out of the bond markets and forced to turn to the troika for help. But there just isn't enough money in the ESM and its predecessor, the $551 billion European Financial Stability Fund, to bail out Spain.

What's more, Italy, which itself had to pay sky-high interest rates a few months back, is again facing a spike in interest rates even as an austerity program strangles the economy.

COULDN'T THE European Central Bank bail out the European banks just like the Federal Reserve did in the U.S.?

THE ECB has tried to do just that. Late last year and again this year, the ECB created a program called the Longer-Term Refinancing Option (LTRO), which loaned about $1.3 trillion to European banks at near-zero interest rates. The banks of indebted countries like Spain and Italy used that money to buy up their own government bonds under pressure from politicians eager to shore up government finances and reduce their exposure to foreign creditors.

But this move carries dangers of its own. "There is a risk it's like tying two drowning people together in the hope they will float," Benedict James of Britain's Linklaters law firm told the Financial Times.

At the same time, French and German banks used the money to dump government bonds from Greece, Italy, Spain and Ireland to try and reduce their risks."

The result of all this has been a kind of re-nationalization of government debt, which has exposed the widening cracks in the eurozone.

Yet despite the easy money from the ECB, the European banks are still battening down the hatches. Lending between banks is at its lowest level since the crash of 2008--a sign that the financial elite is fearful it won't get its money back if it lends it out.

A more obscure, but potentially devastating, fault line is the growing imbalance in the eurozone's central payment system to finance trade between different eurozone countries. This has left Germany's central bank with $660 billion in claims on other eurozone central banks. In the event of a breakup of the eurozone, the losses could be huge.

But the biggest problem the ECB faces is that there is no common European treasury. The Fed in the U.S. can always count on the U.S. Treasury to support its policies, but the ECB has no such option.

Meanwhile, a "bank jog"--not yet a run--has seen depositors move billions out of so-called "peripheral" eurozone economies. In Greece, savers have pulled $90 billion out of the country's banks since 2009, and some $3.9 billion was moved out of Spanish banks in April--and that was before the big bank Bankia failed and had to be rescued by the state.

THERE'S TALK of initiating a European banking union, a fiscal union or issuing a "eurobond" to share the debt burden and lower interest rates for the most indebted countries. Can that work?

EUROPEAN LEADERS may well come up with some long-term plan for such developments. But there's no sign that Germany is willing to foot the bill for any such measures unless it gets sweeping concessions on national sovereignty--that is, Spain or France or another country would have to allow EU bureaucrats in Brussels to act as watchdogs for Germany by having oversight over government taxation and spending policies.

But the suffering of Greece under the troika's policies will give pause to any politician who considers following that path. What's likely to emerge from the eurozone summit are some short-term fixes to keep Spain from unraveling and some vague promises about greater fiscal unity.

WHAT ARE the political implications of all this?

GREECE--WITH the collapse of mainstream political parties amid a 1930s=style depression--is an extreme example. But the convergence of social democratic, liberal and conservative parties around austerity policies has opened the door to both the left and the anti-immigrant far right.

That's why the explosive growth in support for SYRIZA is so important for Greece, the rest of Europe and beyond. At a moment when European leaders insist that there's no alternative to continued suffering and misery, the resistance in Greece offers inspiration and hope.