In defense of public education

City schools are being dismantled and privatized--with Barack Obama's approval.

WHEN EDUCATION Secretary Arne Duncan praised Hurricane Katrina a few years ago as "the best thing that happened to the education system in New Orleans"--because it enabled the closure of most public schools and their replacement with charter schools--he was forced to apologize.

But Duncan himself--backed by his boss, Barack Obama--has unleashed another destructive storm of corporate-driven "education reform," and it's bearing down on Chicago, where Duncan once ran the public school system, setting the stage for what could be the first teachers' strike in Chicago in 25 years. 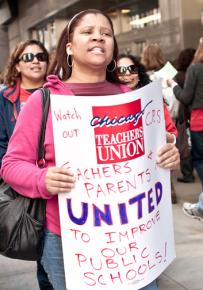 In driving these changes, Duncan is making use of the Bush-era federal law known as No Child Left Behind, which ties federal funds to state and local school officials' willingness to close or "turn around" schools that fail to improve test scores.

The Obama administration itself amped up the "school reform" agenda through its $4.3 billion Race to the Top competitive grant program. To have a chance at the money, state legislators had to pass new laws expanding charter schools and imposing harsh evaluation systems on teachers while weakening job security.

For updates on the Chicago teachers' strike throughout the day, go to the SocialistWorker.org Facebook page.

The teachers need your financial support--please consider making a donation to the CTU Solidarity Fund.

If you are in Chicago, picketing will take place at schools in the morning, starting at 6:30 a.m. On Tuesday, the union is calling for a mass rally downtown at Daley Plaza, across from City Hall, at 2:30 p.m.

What all this amounts to is the end of universal public education as we've known it--a cornerstone of U.S. society, in the North anyway, since the 1850s.

If that sounds like an exaggeration or conspiracy theory, take it from Duncan himself. Once embarrassed at having cheered on a deadly catastrophe in a majority African American city, Duncan is now openly proud of post-Katrina education in New Orleans. "New Orleans is doing a fantastic job as far as improvement goes," Duncan said of a city where, before Katrina, just 1.5 percent of students attended charter schools. Today, 80 percent do.

Remember that quote the next time someone says that you have to vote for Obama to stop Mitt Romney's education agenda. As Ben Joravsky of the Chicago Reader wrote about Romney's program for education: "[I]n many respects, it reads like it could have been written by our very own union-busting, charter-school-loving Mayor Rahm Emanuel." Emanuel, of course, was Obama's chief of staff when the administration unleashed Race to the Top.

TO UNDERSTAND what's driving the school reform agenda, remember the slogan from the 1970s Watergate scandal: follow the money.

Even Facebook boss Mark Zuckerburg, looking for some good public relations after the feature film that portrayed him as a schmuck, decided to toss $100 million to the public schools in Newark, N.J., a city with which he had no previous connection. And according to the New York Times Style section--which usually focuses on fashion design and the leisure pursuits of the rich and powerful--Wall Street players have taken up adopting charter schools.

But behind the feel-good politics and photo ops--see, the 1 percent really does care about poor kids!--there's an aggressive program to reshape the U.S. working class to suit capital's needs in the globalized 21st century economy.

Unwilling to pay the kind of taxes necessary to support quality public education across the U.S., business and its political operatives like Duncan and Emanuel are creating a system in which access to good K-12 public education will be rationed, with working class and students of color funneled into either budget-strapped neighborhood schools or into charters with corporate and political clout, but dubious educational quality.

The first part of this program has been in place for decades--housing policies and income inequalities enabled the white middle class to leave big cities and enroll their kids in better-funded public schools in the suburbs. Since school funding across the U.S. is overwhelmingly based on property taxes--and since factory closings drained old industrial cities of their tax base--inequality between urban and suburban school districts increased, with African American and Latino students concentrated in underfunded city schools.

The result has been the re-segregation of public schools more than half a century after the U.S. Supreme Court's Brown v. Board of Education found that separate Black and white schools were inherently unequal.

Today, efforts to redress that racist legacy have all but ceased. To cite just two examples: in the Charlotte-Mecklenburg Schools in North Carolina, a judge in 1997 ended a desegregation plan that allowed Black students to be bussed to suburban, mostly white public schools. "What followed was essentially a reversal of desegregation," according to two researchers at the University of North Carolina Urban Institute.

In 2009, another federal judge lifted a court order that had forced Chicago Public Schools officials to take race into account for enrolling students in magnet and selective enrollment schools. This despite the fact that a Harvard study found that Chicago schools were "only a few percentage points away from total apartheid."

As David Kirp, a University of California-Berkeley professor, wrote in the New York Times:

[D]esegregation is effectively dead. In fact, we have been giving up on desegregation for a long time. In 1974, the Supreme Court rejected a metropolitan integration plan, leaving the increasingly black cities to fend for themselves. A generation later, public schools that had been ordered to integrate in the 1960s and 1970s became segregated once again, this time with the blessing of a new generation of justices.

Today, students in racially segregated urban schools are being treated as lab rats by the corporate education reformers, who are teaming up with politicians to use the economic crisis as leverage.

With the education money in the federal stimulus package of 2009 now gone, officials in Detroit, Philadelphia and Cleveland and other cities are using their busted budgets as a pretext to dismantle public education. Chicago is likely to follow suit, as the Board of Education in that city is deliberately spending all its reserve funds this year. Teachers' union activists believe this is designed to create a crisis and justify the closure of as many as 100 schools.

THAT'S WHY the stakes in the battle over public education in Chicago are so high.

So far, neither the National Education Association nor the American Federation of Teachers (AFT) has mounted a fight against corporate education reform. In fact, AFT President Randi Weingarten argues that the union must collaborate with reformers, arguing that teachers must "lead and propose" on the issues.

By contrast, the Chicago Teachers Union (CTU)--which is Local 1 of the AFT--is gearing up for a fight not only for adequate pay and benefits, but for fully funded public education with smaller class sizes and an enriched curriculum.

For the business-backed education reformers, the stakes are high, too. If they can take down the CTU, they will be much further in their goal of gutting the teachers' unions, which together constitute the largest organized labor groups in the U.S. That's why it's so important that everyone who supports public education--and the rights of those who work in them--stand with the CTU.

CTU leaders--members of a rank-and-file caucus that swept to victory in local elections last year--have been mobilizing the whole membership for a fight. That paid off at the end of the last school year when 98 percent of members who cast a ballot voted to authorize the union to call a strike. Meanwhile, parents, students and community organizations have rallied behind the CTU in large numbers--a crucial development given the history of conflicts between these forces in some past struggles.

The showdown is coming in September. Anybody who cares about the future for teachers and our schools--in Chicago and around the country--needs to act now to help the CTU win this fight.