Palestine and the Intifada

Anthony Arnove, author of Iraq: The Logic of Withdrawal, tells the story of the Palestinian uprising that shook Middle East politics starting 25 years ago this month.

TWENTY-FIVE years ago, beginning in December 1987, a Palestinian uprising against Israeli occupation broke out in Gaza. The uprising came to be known popularly as the "Intifada"--and years later, as the "first Intifada," after a second Intifada, the Al-Aqsa Intifada, broke out in September 2000.

In Arabic, "intifada" means to rise up or shake off. The first Intifada embodied the struggle of Palestinians to win basic freedoms long denied them through Israeli policies of exclusion and domination.

The Intifada took place against a backdrop of 20 years of occupation of Gaza, the West Bank and Sinai--and almost 40 years of Israel's dispossession of Palestinians. By 1987, Palestinians were living on a tiny fraction of their lands, with millions living as refugees as a result of both 1948, when Israel was established through the forcible expulsion of more than 700,000 Palestinians, and 1967, when Israel's war forced a new generation into exile.

Day by day, Palestinians observed Israel building more "facts on the ground" designed to further entrench Israeli domination over all of Palestine: more settlements; greater restrictions on Palestinian life, culture and political expression; and new indignities and humiliations at the hands of the Israeli army. 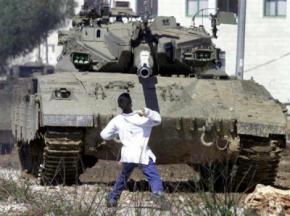 These indignities were crystallized for many Palestinians when, on December 8, 1987, an Israeli truck killed four Palestinians near a crowded checkpoint at the entrance to the Gaza Strip. The incident triggered a new wave of protest, marked by the participation of a new generation of Palestinian youth who had lived their entire lives under occupation.

Teenagers, adults and young children took to the streets to protest in any way they could. The iconic image of Palestinians hurling stones at Israeli tanks and soldiers was born.

Israeli troops met Palestinian stones, with gunfire, killing hundreds of Palestinians, many of them under the age of 17. At the height of the Intifada, Israel had more than 175,000 troops deployed to suppress the protests.

But the response of the United States was to describe Palestinians standing up with their bodies and stones against the entire might of the Israeli military as terrorists. U.S. Ambassador Robert Pelletreau told Palestine Liberation Organization (PLO) head Yasser Arafat that he must end the "riots" in the Occupied Territories, "which we view as terrorist acts against Israel."

The Intifada didn't only take the form of demonstrations. As analyst Phyllis Bennis wrote in Understanding the Palestinian-Israeli Conflict: A Primer:

It began as spontaneous actions, stone-throwing children and young people challenging the troops and tanks of Israel's occupying army. But soon it became more organized, as existing grassroots organizations...mobilized to respond to new conditions.

Women's, workers, medical, students, agricultural and community organizations took on new tasks--growing food in home and community gardens to replace the Israeli goods now being boycotted; guarding village streets at night with whistles to warn of soldiers on their way; mobile clinics to provide emergency medical help to villages or towns under curfew; tax protests; enforcement of a soon-declared daily commercial strike that shut down Palestinian businesses at noon.

THE NEW forms of organization threatened the exile leadership of the PLO, which had presided over years of eroding Palestinian rights. The PLO was largely out of touch with the reality of life for most Palestinians, whether in the diaspora, in Israel itself or in the Occupied Territories.

The organization did not just step aside, though. Instead, the PLO leadership sought to use the Intifada as a bargaining chip to achieve a compromise with Israel that would put it in charge of a new Palestinian Bantustan system.

In his indispensable book Israelis and Palestinians: Conflict and Resolution, the Israeli author Moshé Machover describes how the process unfolded and eventually led to the dead end of the so-called Oslo Accords in 1993:

The first Intifada, which erupted in late 1987 and went on for several years, had by 1991 taught the Israeli leadership that Israel could not long continue its direct rule over the Palestinians: keeping "order" in the Occupied Territories was just too costly--not only in economic terms, but also in its adverse effects on Israel's army and society. Shimon Peres concluded that a way must be found to get the Palestinians to police themselves. This of course meant giving them some degree of autonomy. It also required a willing Palestinian partner, who would be ready to lead an autonomous Palestinian Authority--on Israeli terms. These terms include bearing sole responsibility for preventing any attack on Israeli soldiers, settlers or civilians--and taking full blame for any attacks that do occur.

As it happened, such a partner was found in the apparently unlikely shape of Yasser Arafat, who was desperate for a deal at almost any price. His feeble bargaining position was of his own making. By foolishly siding with Saddam Hussein in the Gulf War (instead of taking the morally justified and politically astute position of "a plague on both your houses"), Arafat cut the financial branch on which he had been sitting so comfortably. Until the Gulf War, he had maintained his control of the PLO and manipulation of its personnel by means of ample funds flowing from Saudi Arabia and the Gulf States, both as direct government subventions and as taxes he was allowed to levy on the large Palestinian refugee community profitably employed there. Suddenly, the funds were cut off, and Arafat was left bereft of his means of control.

No wonder he was ready to accept Israel's terms at Oslo, without--so insiders report--even bothering to read the small print.

Israel successfully pushed much of the burden of suppressing Palestinian rights onto the shoulders of the new Palestinian Authority. As then-Prime Minister Yitzhak Rabin explained in an interview with the Israeli newspaper Yediot Aharonot:

I prefer the Palestinians to cope with the problem of enforcing order in Gaza. The Palestinians will be better at it than we were because they will allow no appeals to the Supreme Court and will prevent the [Israeli] Association for Civil Rights from criticizing the conditions there.

They will rule there by their own methods, freeing--and this is the most important--the Israeli Army soldiers from having to do what they will do.

The aspirations of the Intifada to secure self-determination and dignity for Palestinians were quickly betrayed by the Oslo process. Palestinian scholar Edward W. Said perfectly summed up what the Oslo Accords meant in practice in a 1993 article for the London Review of Books:

Now that some of the euphoria has lifted, it is possible to re-examine the Israeli-PLO agreement with the required common sense. What emerges from such scrutiny is a deal that is more flawed...than many had first supposed.

The fashion-show vulgarities of the White House ceremony, the degrading spectacle of Yasser Arafat thanking everyone for the suspension of most of his people's rights, and the fatuous solemnity of Bill Clinton's performance, like a 20th-century Roman emperor shepherding two vassal kings through rituals of reconciliation and obeisance: all these only temporarily obscure the truly astonishing proportions of the Palestinian capitulation.

So first of all let us call the agreement by its real name: an instrument of Palestinian surrender, a Palestinian Versailles.

SAID'S ANALYSIS has been tragically borne out since. Settlements have drastically expanded, as have Israeli checkpoints, Jewish-only roads and the incursions of the apartheid wall.

Palestinians remain under siege, and periodically face the devastation we have seen unleashed again in Gaza with Operation Cast Lead in 2008–09 and Operation Pillar of Cloud in November 2012. Israel continues to build more facts on the ground to further foreclose any possibility of a just resolution. Life for many Palestinians is one of constant humiliation.

But as the poet William Butler Yeats wrote in the aftermath of the First World War, "the center cannot hold." The same injustices that led to a popular uprising by Palestinians 25 years ago are only worse. And people can only submit to abuses for so long. The situation is untenable.

Yet for any uprising to have a chance of achieving a fundamental change for Palestinians, they must have the solidarity of people worldwide who reject occupation, war and an expansive Israel settler-colonialism. In particular, Palestinians must have the support of activists in the United States--the political, military and economic guarantor of Israeli aggression and its policies of dispossession. And they must have the support of their neighbors, as in Egypt, where the struggle against autocracy continues and where the Palestinians have long symbolized the right--and need--to resist.

The first Intifada remains an inspiring example of people standing up against their oppressors, despite all the odds against them. But it also serves as a cautionary tale of how those aspirations can be betrayed, something that must be guarded against.