The not-so-random violence in U.S. cities

Keeanga-Yamahtta Taylor looks at the response to the death of a Chicago teenager--and how activists are coming to terms with the real roots of the violence.

"IT'S VERY painful to see your big sister get slaughtered," said the 10-year-old brother of Hadiya Pendleton, relaying his devastation at the murder last month of the 15-year-old African American high school student in Chicago.

Pendleton was shot while hanging out with her friends in a park on the South Side of Chicago, after completing her exams in school. She died shortly after. This past weekend, hundreds of Black Chicagoans lined up in below-freezing weather to attend the funeral of the slain teen.

Pendleton's death received national attention for two reasons. One, she had attended and performed for President Obama's inauguration just days before she was killed. Second, her death underlined the random and senseless violence plaguing cities like Chicago, in the midst of a national debate about gun control.

Local activists and political leaders, including the Rev. Jesse Jackson, called on Obama to return to Chicago to attend Hadiya's funeral and draw national attention to the escalating gun violence in Chicago. A nationally circulated petition read in part, "As Newtown swirls down the memory hole and passion to implement sane gun control gets sidetracked by whatever the latest congressional bullshit circus will be, President Obama should stand up and take advantage of a tragic opportunity to keep the anti-gun violence movement engaged." 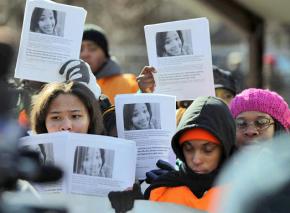 Since 2008, more than 530 young people have been killed in Chicago, making it the youth murder capital of the country. The vast majority of these deaths--almost 80 percent--have happened in 22 Black and Brown majority neighborhoods. In 2010, nearly 700 Chicago school children were shot, and 66 of them died. Last year, 24 school children were killed and another 319 were injured by gunfire.

Chicago has been at the center of media attention for several years as some neighborhoods in the city have been wracked by gun violence and crime. Indeed, on the day Pendleton was killed, two other murders happened, bringing the total number for January to 43--making this the deadliest January in a decade. There were more than 500 gun murders in Chicago last year, up 38 percent from the year before.

But of course, these murders aren't taking place randomly all over the city. In fact, they have been pretty much contained to the Black majority South and West Sides.

This local unsolved murder was catapulted into the ongoing national debate over gun control. Yet Chicago is a curious place for such a discussion--because it has some of the most stringent gun laws in the country. Illinois is the only state in the nation with no so-called "concealed carry" law. There are no gun shops or civilian shooting ranges in Chicago, and until last year, it was virtually illegal to own a gun within city limits.

Nevertheless, Chicago is one of the most well-armed cities in the country. Chicago police complain that there are more guns on Chicago streets than in other big cities like New York and Los Angeles. Last year, according to the Associated Press, Chicago police seized more than 7,400 guns, three times the number seized in New York.

It's understandable that ordinary Chicagoans, particularly in communities bearing the brunt of gun violence and crime, would want to try to get the guns out of the hands of children who are killing their peers. Hadiya Pendleton's is one among so many arbitrary and utterly senseless deaths. The weekend before Hadiya was killed, a Chicago resident named Shirley Chambers lost her fourth child--the last of her four children--to gun violence.

Yet the response of political leaders like Rahm Emanuel shows not only that they aren't asking the right questions about gun violence--but that they are pushing for the wrong answers. Emanuel and Police Chief Garry McCarthy used the occasion of Pendleton's death to announce the deployment of 200 more cops on city streets.

The endless clamoring for more gun laws, more law enforcement, more jails, more prisons and more punishment obscure the more important discussion about why gun violence exists in the first place, why it might be getting worse and, most importantly, what can be done about it.

The call for more police to be deployed in African American communities in Chicago can never be taken lightly. Chicago police have a long history of misconduct, abuse and even torture of Black suspects. The television news program 60 Minutes recently aired a segment about false confessions and corruption in the Chicago Police Department and the local state's attorney's office. In January, the City Council approved $33 million in payouts for settlements in just two civil lawsuits involving police violence.

So this is hardly an institution that can be counted on to evenhandedly enforce gun laws and stop violence in Black communities.

There is a causal connection between more arrests and growing problems with crime. As police continue to arrest young African American men and women, it pushes them further and further from opportunities to survive. Author Michelle Alexander has written extensively about how what she calls "the New Jim Crow" has created a permanent unemployable group of mostly African American men who have drug and other minor convictions.

More police on the streets raises the probability of more encounters with law enforcement, leading to arrests for petty crimes and criminal records that make it virtually impossible for young Black men--and an increasing number of young Black women--to get meaningful employment. This inevitability pushes people into the unconventional job market, where drug dealing, prostitution, theft and more become the means for people to feed themselves and their families.

In other words, more police is part of the problem.

THERE ARE many theories about crime in Chicago--much of it centering on the splintering of gang boundaries and conflicts over the local drug market. But whatever role gangs might play in the escalating violence, we know all this is happening in the context of record levels of poverty, unemployment and a general assault on publicly funded social services and institutions that previously cushioned the worst aspects of poverty.

Jesse Jackson made the point at a recent march in response to Pendleton's murder:

You cannot police poverty. You cannot police broken dreams, you cannot police aspirations...This cannot be dealt with on just a citywide level. We have drugs and guns coming in, and jobs going out. In most of the areas where these shootings are taking place, the unemployment rate is between 45 percent and 55 percent.

It's not only an old-guard civil rights leader who recognizes this--many of Pendleton's peers made the same connection. In the days after her murder, more than three dozen local high school students staged a march to the park where Pendleton was killed. Police tried to break up the demonstration, but the students persisted, saying that it was their lives at stake.

The 17-year-old organizers came up with a six-point plan to respond to violence in Chicago, including demands that Emanuel create 2,000 part-time jobs and 2,000 summer jobs for unemployed Chicago youth. The organizers also demanded that the city re-open the mental health clinics the city closed last year under the pretext of budget cuts.

Gwen Baxter, who lost one of her own sons to gun violence, helped the students organize the march. She questioned what it would take to get serious about violence in Chicago. "How many is it going to take?" she said to the Chicago Tribune. "Does it have to be [Rahm Emanuel's] own children? Our children are people, too, and they count."

Baxter's comments underline the fact that it isn't only poverty and unemployment that lead to death and destruction in Chicago's mean streets. Racism is a critical factor as well.

The daily murder of Black and Brown children elicits barely a murmur beyond the communities that endure it. The news media often lead with body counts from the city--the same way they report on deaths in Afghanistan, Iraq or Pakistan--but rarely is there an effort to get behind the statistics and explore why hundreds of children are being killed within miles of where the president of the United States calls home.

It's never stated, but clearly understood: If 530 white children had been killed in a five-year period in any city in the U.S., it would be considered a national emergency. When white children die, it prompts press conferences, soul-searching and demands for change. When Black children die, it is dismissed as "Black on Black" crime and met with calls for more police or finger-pointing at Black parents.

At one level, it's a good thing that figures from the Obama administration and the local establishment were compelled to the attend Hadiya Pendleton's funeral. This demonstrates in a small way that Black life also has value and, when it's snatched away, deserves serious attention and discussion.

But at this late stage, symbolism won't suffice. We need immediate action to restore gutted government budgets, end unemployment, stop foreclosures and evictions, and confront all the material deprivations that underlie the crisis of U.S. cities.

It certainly won't do for Rahm Emanuel to show up at Hadiya Pendleton's funeral, and then days later, prepare to implement tens of millions of dollars in budget cuts for the coming year, which will only exacerbate the desperate conditions that have made Chicago a crime capital in the first place. The same is true about the Chicago Public Schools' plan to close dozens of schools across the city, often in the neighborhoods that have the highest murder rates.

The cumulative impact of these immoral public policies only further destabilizes communities teetering on the edge. The policies fertilize the killing fields in Black Chicago and other cities that are snatching the lives of kids like Hadiya.