What will stop the violence in Oakland?

Oakland residents Alessandro Tinonga and Todd Chretien challenge the city establishment's response to crime--and put forward some proposals of their own.

"SHOOTING HAPPENS out here all the time," said Armando Ramirez, a 37-year-old Oakland resident as he walked with two small children past the scene of a recent shooting. "It's a part of life here."

The streets of Oakland are reeling from a seemingly unstoppable spike in street crime and murders. In the last year, 131 people were killed in homicides in a city of fewer than 400,000 people, making the murder rate four to five times higher than across the Bay in San Francisco. The overwhelming percentage of crime victims are Black, Latino and Asian working-class people.

Nor does it seem likely that there will be a pause in the violence this year--nine murders have already been committed so far in 2013. In one weekend in mid-January, four people were fatally shot within a six-hour period.

The scale of the killing is appalling. The casualty rate for young Black men in Oakland is higher than for Black men in the U.S. military fighting in Afghanistan. Over the course of the 11-year occupation of Afghanistan, 1,200 U.S. soldiers have died, a quarter of them African American. In Oakland, roughly the same number of people have been murdered, and over 80 percent of them have been young Black men. 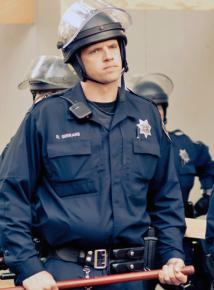 As residents demand action, City Hall and the pundits come out with more of the same answers: more cops and more legal leeway to pursue suspects.

Oakland Tribune columnist Tammerlin Drummond suggested taking a page from the authorities in Brazil and sending the army into Oakland to wage a war on gangs.

Even liberal members of the city council, like Rebecca Kaplan, a former Green Party member-turned-Democrat, joined the chorus when she proposed:

Contract with the Alameda County Sheriff's Office to provide additional patrol units for crime suppression; authorize a police academy in June 2013; hire 21 new civilian employees in the police department, including support staff for our crime lab. This proposal is the kind of immediate action that we need to reduce violent crime. And I support it wholeheartedly because we need to act right away.

WHILE ACTION is absolutely necessary, the conventional wisdom that hiring more cops will curb the violence in Oakland is probably the worst way to deal with the crisis. More cops can only result in increased racial profiling and brutality. The Oakland Police Department is still plagued with a record of violence and racism. Its record is so bad that it is under threat of being taken into federal receivership--something that has never happened to a police department in the history of the U.S.

For the last decade, the department has failed to conduct court-ordered internal reforms following the "Oakland Riders" scandal, where four Oakland police officers were exposed for engaging in assault, kidnapping, planting drugs and cover-ups.

Recently, Robert Warshaw, a court-appointed monitor who is supposed to oversee the reforms, reported that the department was backsliding. He wrote that within the OPD, there continue to be major failures in the responsibility of officers "to report misconduct by other officers" and the ability of supervisors "to critically evaluate the use of force by the officers they supervise."

The lack of oversight regarding misconduct effectively means the racism and corruption that runs rampant in the OPD has not been stopped, nor will it be brought under check under the current system. In fact, Warshaw's most recent report, covering July through September 2012, described five reported incidents of Oakland police pointing their guns at citizens when no crime had been committed. In one incident, two cops pointed their weapons at a sleeping 1-year-old while investigating a misdemeanor crime.

Several investigations have shown that pulling guns on unarmed people is commonplace in Oakland. In more than three-quarters of the cases, the suspects were Black.

Nor will more police will be effective in stopping crime.

According to sociologist Richard Moran, police detect only 2.5 percent of crimes in progress. If a patrol car followed the same route every day, it would encounter a crime in progress once every 14 years.

While the police are able to solve a minority of the murders that take place in Oakland--around one-quarter--they almost never prevent crime or stop someone in the act of committing one. At best, they show up after the violence is over, harass the community and then stand around for hours collecting overtime pay. They do not counsel grieving families, nor provide support for them.

In 2008, when there were 200 more cops on the payroll than there are today, Oakland suffered almost exactly the same number of murders. Even with a heavy police presence, there is no guarantee that violence will be prevented. Tragically, this was demonstrated during February's First Friday downtown art festival, when a gunman opened fire in a crowd, killing 18-year-old Kiante Campbell and wounding three others, despite 30 cops on duty on the same street.

Adding more heavily armed and nervous rookie cops to the streets of Oakland as part of a police force that is infamous for its corruption will do nothing to curb violence on the streets.

In desperate times, radical solutions are necessary to get to the root of problems. The root of violence in Oakland is related to a number of deep-seated factors: Unemployment, racism, mass incarceration, underfunded schools, and a violent and racist police force. These are the typical features of what Michelle Alexander calls the New Jim Crow--and as bad as the system is everywhere, it's generally worse in Oakland.

It can't be seen as a surprise when a small percentage of people among the many who are boxed in by this system take their frustrations out on those around them and try to survive as best they can. This is what is called "crime."

ONE MEASURE that would be far more effective than more cops on the streets is a major jobs and education program to undercut the despair that runs through the streets of Oakland. But how would an undertaking like this be funded in a city that struggles with budget problems every year?

The Oakland Police Department receives approximately $200 million each year, which amounts to 40 percent of the city's general operating budget. The starting salary for a rookie cop in Oakland ranges between $69,000 and $98,000, and that doesn't include overtime and extra pay for working nights. So rookies earn roughly $80,000 per year, with full benefits. Most cops make well over $120,000 in salary, and Chief Howard Jordan makes $221,000--plus an $800 a month "uniform allowance." That's about $50,000 more per year than a U.S. senator.

In addition, Oakland has paid out almost $60 million in recent years to settle civil lawsuits stemming from Oakland cops killing or brutalizing residents.

So what if the Oakland City Council and Mayor Jean Quan fired all the cops? What if Oakland liquidated the OPD and exchanged badges for jobs? Redirect the $200 million the cops absorb to hire 2,500 to 3,000 community workers at a living wage of, for instance, $50,000 plus full benefits. These workers should be free to join the union of their choice.

What would this army of community workers do? First, it could be composed of thousands of young people from the neighborhoods suffering the worst effects of poverty, racism and crime. This would inject millions of dollars into the pockets of the people who need it most, as well as their families--and immediately lift approximately 10,000 people out of poverty.

Second, these young workers could work with schools, churches, unions and community organizations to develop recreation and art programs in our poorest neighborhoods.

Third, repression and prosecution of young violent offenders only reinforces a permanent underclass that has to resort to the crime economy to survive. Politicians talk endlessly about "breaking the cycle of violence." This peace army, trained to counsel and support and care for young people, would do a world more good than hiring another 30 cops from Walnut Creek to come into the community with dogs, searchlights and shotguns. A peace army could have a chance at organizing a gang truce, following the precedents laid out by Stan "Tookie" Williams before he was murdered by the state of California in 2005.

All this would be just a first step. Even this peace army of 2,500 would only be a small portion of the jobs and social spending we need to heal Oakland. It could not solve the problems of racism and poverty that create violence in our community. But it would be a start.

In the last election, California passed Proposition 30, a ballot initiative that increased income taxes on top earners in the state, so Oakland should get $70 million of its fair share of the Proposition 30 money. Add that to the budget for the OPD, and that gets us to almost $300 million.

President Obama is asking Congress for $60 billion to help rebuild in the wake of Hurricane Sandy, which he calls a natural disaster. That is surely money well-spent (except for the inevitable robbery by insurance companies, etc.). But doesn't 131 murders a year constitute a social disaster? Where could we find more money to confront this ongoing disaster?

And there's peace in the streets of Oakland--or at least is a big step toward that peace.