Why are tensions rising in Korea?

David Whitehouse explains the background to the latest escalation of the conflict.

THE SITUATION on the Korean peninsula has taken a belligerent new turn--and as usual, the mainstream media have presented a story that could have come straight out of the U.S. State Department news releases. The simple message is: "North Korea has (once again) taken the region to the brink of war."

The latest installment in this melodrama begins in December of last year with North Korea's successful launch of a three-stage rocket. That rocket deploys a satellite, but it proves that North Korea has the capacity to fire others that could power a long-range ballistic missile. 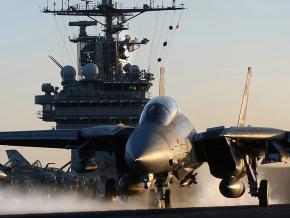 That's the story the U.S. government and its media stenographers promote. What's missing from this account, however, is the Obama administration's escalation of military threats against North Korea, especially in the year since Kim Jong-un came to power.

Demonizing the North is made easy by the character of the regime in power there. Though it still claims to be socialist, it is the opposite: A tyranny in which most of the population lives in poverty and dictatorial power is passed down through a single family.

But targeting North Korea has its uses for the U.S. government, now as much as at any time in the past. Not since the first term of George W. Bush has the U.S. signaled so blatantly that it aims for the downfall of the North Korean regime. Kim has definitely got the message. Obama, however, is a stealthier aggressor than Bush, so he hasn't shared the message with most people in the U.S.

THE U.S. military has long cooperated with South Korean government to prepare for war, conducting frequent joint military exercises and deploying major weapons in the South. There are still some 28,000 U.S. troops in the South, and, in case of war, the U.S. would be in command of the South's 500,000 troops--a longstanding proviso that is set to expire in 2015. The U.S. withdrew its nuclear weapons from the Korean Peninsula in the early 1990s, but nuclear and other heavy munitions remain at the ready from ships, submarines and warplanes just off the coast.

All of that is business as usual. But in the past year, there are many signs that something new is going on. The U.S. and South Korea have started taking steps to fight an offensive war that would occupy the North, as Christine Hong and Hyun Lee report on the Foreign Policy in Focus" website.

There are several ways to carry out a land war in the North, according to military experts.

One would be to mount a massive paratroop or helicopter operation. Otherwise, U.S. and South Korean troops would either need to make amphibious landings or find a way through the mine-laden Demilitarized Zone (DMZ) that separates Korea's two halves. In the past year, the U.S. and Southern militaries have taken steps to be ready for the last two tactics.

To cross the DMZ, the U.S. has brought in mine-resistant vehicles originally constructed for action in Iraq and Afghanistan. The redeployment shows the real meaning of the U.S. "pivot to Asia"--as Barack Obama winds down past wars in the Middle East to prepare for new ones.

Last year's war games included a computer-assisted simulation of a Southern invasion of the North. South Korea's Chosun Ilbo reported that "Seoul and Washington practiced preparing for sudden change in the North for the first time during last year's Key Resolve drill, but this was the first time we went on the assumption that South Korean troops would be deployed in the North."

In April 2012, South Korea disclosed that it had developed a cruise missile capable of a precision attack on any target in the North. In the summer, the Pentagon advertised its possession of "super bunker-busters" that could destroy the North's nuclear facilities.

Last year, Japan also agreed to host a second U.S.-designed missile defense radar, while South Korea is constructing a naval base on the island of Jeju that can accommodate Aegis destroyers, a key component of missile defense. The benign-sounding project of missile defense would actually enable offensive operations by neutralizing North Korea's missile deterrent.

WHETHER OR not Obama and South Korean President Park Geun-hye actually plan to overthrow the regime of Kim Jong-un, they're taking concrete steps to get ready for regime change. Kim's responses show that he's preparing for the worst.

That would explain why he made the threat of pre-emptive nuclear strikes. North Korea's nuclear program may have begun decades ago as a bargaining chip to win aid and a security guarantee from the U.S., but it now seems clear that Kim is treating the program as a deterrent force against U.S.-led aggression.

The last time this happened was when George W. Bush declared North Korea to be a part of an "Axis of Evil" in 2002. In the ensuing buildup for the U.S. invasion of Iraq in 2003, Kim Jong-un's father, Kim Jong-il, saw the writing on the wall: Bush felt free to attack Iraq because Saddam Hussein hadn't developed an effective military deterrent, so the elder Kim resolved to hurry up and get one. North Korea detonated its first nuclear device in 2006.

The U.S. conflict with North Korea went from a hot point in 2002-03 to a slow simmer as the U.S. got bogged down in the Iraq and Afghan wars. But Obama's pivot to Asia has quietly reiterated the threats that Bush had made so loudly.

The Pentagon's "Defense Strategic Guidance," published in January 2012, may sound a warmer tone that the arrogant "Bush Doctrine," but it does share some of the same premises.

Chief among them is that the U.S. will not tolerate any effective deterrents against its unilateral military action. Obama's Pentagon is committed to thwarting other countries' attempts at "anti-access" and "area denial" because "states such as China and Iran will continue to pursue asymmetric means to counter our power projection capabilities." In other words, the U.S. military must remain strong enough to go wherever the commander-in-chief decides.

South Korea's new president, Park Geun-hye, is the daughter of the South's former military dictator, Park Chung-hee. She has credentials as a staunch opponent of the North--she has offered to be open to relations with the North Korean regime only on the condition that it disarms.

Nevertheless, Park is constrained by public opinion, so she has struck some conciliatory notes along with aggressive ones. Most South Koreans wish to avoid a confrontation with the North and hope for a peaceful reunification of the country. Park entered office with the lowest approval ratings of any previous president: 44 percent. She has earned popular distrust by appointing right-wing cronies of her family along with political unknowns.

Two-thirds of the population favors humanitarian aid to North Korea "regardless of the political situation," and more than half favor direct talks with the North. In other countries, a politician might try to win popularity by ratcheting up war rhetoric, but in the Korean context, such a tactic might have the opposite effect.

Park and Obama may be preparing for war, but their first obstacle would be South Korean resistance, not North Korean arms.

SOME COMMENTATORS have suggested that China is reconsidering its support for North Korea as a new president, Xi Jinping, takes office. Although Chinese and U.S. officials are at opposite poles over trade and currency policies, cyber-espionage and the ownership of islands off the Asian mainland, they seem to be united in opposing North Korea's development of ballistic missiles and nuclear weapons.

After North Korea conducted its nuclear test on February 12, diplomats from China helped the U.S. draft and pass a new round of United Nations sanctions to punish the North. The new UN measures expand on actions the Security Council took after North Korea's launch of its three-stage missile last December.

Despite these measures against the North, China's actions probably don't herald a major shift in policy. For now, China still has uses for North Korea. It serves as a land buffer against U.S. and South Korean military forces, and China has sought to develop the North as a low-wage "eastern province." The votes against the North in the UN carry little cost to China, while they burnish China's image as a "responsible stakeholder."

China's opposition to Northern militarism also helps appease South Korea, which is a far more important economic partner to China than the North. What's more, China knows that the North's belligerence only gives the U.S. an excuse to bolster its alliances and military presence in Asia. Obama's "pivot toward Asia" is calculated to undermine China's influence in the region--just where Beijing is most keen on extending its political and military clout to match its growing economic weight.

Chinese officials may oppose North Korea's nuclear development, but that doesn't mean they think Kim is crazy--or that they're taking sides against him. They recognize that Kim's regime has built its bombs and missiles in response to U.S. provocations. Xinhua, China's official news agency, wrote an astute editorial summarizing the situation in February:

The United States should reflect seriously on the latest nuclear test of the Democratic People's Republic of Korea (DPRK), which was caused by longstanding antagonism between the two countries...History has proven that a country threatened by force and sanctions would maintain and further develop its own military strength, [Chinese analysts] said...

On the root cause of the nuclear test, [a specialist in Beijing] said the DPRK's real target was the United States, instead of China or South Korea..."The current situation in Northeast Asia is imbalanced, with South Korea and Japan sheltered under the U.S. nuclear umbrella," said Ruan Zongze, deputy director of the China Institute of International Studies.

At the same time, he said, the military strength of South Korea and Japan is not weak and the DPRK's security pressure mainly comes from the United States, the real target of its nuclear deterrence.

As always, the situation in Korea is complex because it involves more than Koreans. For centuries, bigger powers have tried to influence events on the peninsula from the outside. One thing is clear, however: The current crisis is made in the USA.