Nolan Rampy and Ian Stokes report on a campaign to get Ben & Jerry's to honor its own mission statement pledging "deep respect for human beings."

BEN & JERRY'S Ice Cream is widely known and respected for its socially conscious business practices and donations to social-justice movements like Occupy Wall Street. It is less well known, however, that Ben & Jerry's is complicit in Israel's illegal settlement activity in the West Bank.

A compelling new report from Vermonters for a Just Peace in Palestine/Israel (VTJP) reveals that Ben & Jerry's "is making ice cream in Israel and selling it in illegal settlements in Occupied Palestine."

In addition, VTJP's report provides strong evidence that the company's manufacturing plant in Kiryat Milachi, like many Israeli businesses and communities, may be using illegally expropriated water from the largest aquifer in the West Bank, the Jordan River, or both.

Ben & Jerry's business with Israel makes it "economically complicit in the many crimes perpetrated by the Israeli government against the Palestinian people," including "land theft, dispossession and home demolitions," along with "killings and acts of terror committed by soldiers and settlers." 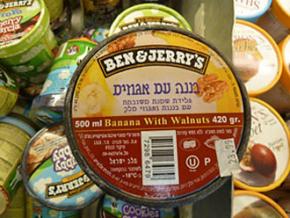 Ben & Jerry's willingness to do business with a colonial-settler state stands in sharp contrast to its public image as a social-justice advocate. Since its founding in 1978, Ben & Jerry's Ice Cream--the "Peace and Love" business--has promoted itself as the company with a social conscience. The Ben and Jerry's Foundation uses its $2 million annual budget to support social-justice movements around the country, such as the United Workers Association and the Ohio Valley Environmental Coalition.

Regardless of what one thinks about a political movement based on corporate altruism, it is unfortunate that Ben & Jerry's commitment to social justice does not extend to the millions of Palestinians living under an illegal military occupation. By selling its ice cream in illegal Israeli settlements, Ben & Jerry's give its implicit endorsement not only of the physical occupation, but also the ongoing expulsion of the indigenous Palestinian population.

Palestinian activist Toufic Haddad reports that, in addition to the 750,000 Arabs expelled from their homes in 1948, "Israel has dispossessed Palestinians from their land through a complex variety of military and bureaucratic means: with roughly 35,000 to 45,000 between 1949 and 1967; 400,000 to 450,000 in 1967; and hundreds of thousands more since the 1967 war as a result of house demolition, identity card confiscation, land expropriation and settlement expansion."

It's ironic that a company with a mission statement proclaiming its "deep respect for human beings" and "the communities in which they live" can rationalize the sale of its product "just a short drive from occupied Palestinian cities and villages, many of which have been economically crippled by closure policies, restrictions on movement and land confiscations," in the words of VTJP.

GIVEN ITS record of promoting socially conscious business practices, some might argue that targeting Ben & Jerry's is unfair considering that so many other companies are doing things far worse than selling ice cream. This argument is misguided for two reasons.

First, Ben & Jerry's support for socially conscious grassroots movements like Occupy Wall Street does not provide any moral capital that would allow it to disregard such concerns in its business dealings with Israel--a systematic violator of human rights and international law.

Ben & Jerry's charitable work does nothing to change the fact that its factory in Israel is built on the ruins of an Arab village destroyed in 1948 and likely uses water taken illegally from Palestinians. Nor does it change the fact that the ice cream is delivered to illegal Israeli settlements "on superhighways that have systematically eviscerated the 'Green Line,' circumventing military checkpoints and roadblocks that torment Palestinians."

Second, it is, in part, because of Ben & Jerry's public commitment to social justice that they should be targeted.

As VTJP's press release correctly points out, "Doing business in Israel and the occupied territory--even the business of ice cream--adds credibility to a racist, violent and unjust status quo. Ben & Jerry's commercial ventures help 'normalize' life for the occupying power and its settlers at a time when millions of Palestinians are denied the right to freedom because, and only because, they are not Jewish."

If building a factory on a razed Palestinian village and doing business in the West Bank--where "it is far easier for an Israeli settler to buy a pint of ice cream than it is for a Palestinian woman to get to work or take her child to a doctor"--meets Ben & Jerry's criteria for social justice, then the term has lost all meaning.

VTJP has launched a campaign calling on solidarity activists and people of conscience to urge Ben & Jerry's to take the following measures until Israel terminates its military occupation and colonization of Palestinian lands in compliance with international law:

1. End the marketing, sales and catering of Ben & Jerry's products in Israel and Jewish-only settlements in occupied East Jerusalem and the West Bank.

3. Issue a statement calling (a) for an end to Israel's occupation and settlement enterprise and (b) appealing directly to other socially responsible companies to do likewise and to end business operations in Israel and its illegal settlements.

Severing commercial ties with Israel would bring Ben & Jerry's actions in line with its social values and send a powerful message that Israel's actions are incompatible with social justice.

"Change is a wonderful thing," Ben & Jerry's CEO Jostein Solheim said in a 2010 interview. "The world needs dramatic change to address the social and environmental challenges we are facing. Values led businesses can play a critical role in driving that positive change. We need to lead by example."

It's time for Palestinians to be the beneficiaries of "dramatic" and "positive change." Ben & Jerry's can help make that possible by ending its complicity with Israel's occupation and the systemic racism of its apartheid regime.