Will the media delete bigotry?

Carlos Enriquez considers the effects of a news agency decision about language.

THE ASSOCIATED Press (AP) news agency announced at the start of April that it was removing the term "illegal immigrant" from its influential AP Stylebook, considered by many news organizations to be the authority on copyediting questions.

The decision comes at a time when proposals for immigration reform--though from very different political points of view--are picking up steam, and in the wake of victories for immigrant rights advocates such as President Obama's Deferred Action for Childhood Arrivals (DACA) policy, which provides temporary permission to work and right of residence to the children of undocumented immigrants--otherwise known as the DREAMers, after the proposed federal legislation called the DREAM Act.

Many immigrant rights groups--including Define American, founded by former Pulitzer Prize-winning writer Jose Antonio Vargas--have engaged in campaigns to pressure newspapers and other news outlets to drop the term, arguing that it dehumanizes people to describe them as "illegal." 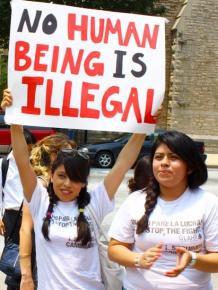 However, although AP's is the most influential style guidelines in journalism, some media outlets are resisting any change. The New York Times, for instance, stated that it isn't likely to stop using the term "illegal immigrant."

The decision has also led reactionary organizations to double down on their bigoted, vitriolic rhetoric. There's the Americans for Legal Immigration Political Action Committee (ALIPAC), whose stances include opposition to any pathway to citizenship for people in the country without proper documents and support for the deportation of the more than 12 million people in that situation.

In lieu of the AP announcement, ALIPAC decided to coin a new phrase: "illegal invader." The organization's president, William Gheen, told the Los Angeles Times, "'Immigrant' should be reserved for people who came to this country legally." Gheen called the AP decision "political correctness on steroids."

Along the same lines, Steve Doocy of Fox News claimed, "This is the AP's way of doing some cheerleading, trying to push immigration reform in Congress."

Associated Press was quick to deny that it was influenced by activism, either specifically about the media's language or the wider issue of immigration. In its press release, AP explained the decision to drop "illegal immigrant this way: "The Stylebook no longer sanctions the term 'illegal immigrant' or the use of 'illegal' to describe a person. Instead, it tells users that "illegal" should describe only an action, such as living in or immigrating to a country illegally."

AP doesn't seem interested in acknowledging that this is a major about-face. As recently as October 2012, AP released a statement defending the use of the term "illegal immigrant." It even claimed that there was no reason to believe the term was demeaning. The news agency referred to the objection that the term "'illegal immigrant' offends a person's dignity by suggesting his very existence is illegal. We don't read the term this way. We refer routinely to illegal loggers, illegal miners, illegal vendors and so forth. Our language simply means that a person is logging, mining, selling, etc., in violation of the law--just as illegal immigrants have immigrated in violation of the law."

ALTHOUGH AP's decision to stop referring to human beings as "illegal" is a positive one and a sign of changing public opinion on the issue, it still recommends use of the word of "illegal" when referring to acts. This goes to the heart of one of the biggest problems with the overall narrative about immigration today.

Describing the act of immigration as illegal still directs attention to what people have done as individuals, while shifting the focus from whether the laws themselves are just, the conditions that lead people to "break" them, and the role of the U.S. government and Corporate America in pursuing policies that drive people to leave behind their entire lives to immigrate, often risking their lives.

The effects of this narrative can be seen in proposals for immigration legislation being put forward by the Obama White House and a bipartisan group of senators known as the "Gang of 8." These and other proposals from the two mainstream parties insist that border security--on the basis of existing laws--must come first. This is even though immigration from Mexico is at net zero due to the weak economy in the U.S.

The proposals also require the undocumented to pay back taxes and fines related to living in the U.S. in violation of immigration laws. But this raises the obvious questions: if immigrants could afford to pay fines and penalties to acquire citizenship, would they be in a position to avoid immigrating without proper documents--or perhaps not have the need to move in the first place.

As with any struggle for civil rights, our victories usually come as a result of grassroots struggle and activism--and despite the political establishment. Thus, Obama's signing of DACA last year, while clearly an election-year maneuver to appeal to Voto Latino, was the result of his hand being forced by the activism of DREAMers--such as the Georgia Six, a group of six undocumented students who risked deportation in June 2011 by committing an act of civil disobedience to protest anti-immigrant legislation in their state.

If the media follow AP's lead and stop using hateful language like "illegal immigrant," that can help activists to advance the national conversation about the structural problems of a system that benefits from immigrant labor without having to offer workers any benefits or proper pay. The movement needs to use every opportunity to challenge chauvinistic views among U.S. workers--and to show how anti-immigrant laws are anti-worker laws that lead to lower wages and worse living standards for everyone.

The immigrant rights movement's slogan "No human being is illegal" is not only true in the moral sense, but in the principle of working-class solidarity that an injury to one worker, student or activist is an injury to all.