Mark Clements is a board member of the Campaign to End the Death Penalty and a former victim of Chicago police torture under Jon Burge, who served 28 years in prison for a crime he didn't commit before finally being released. Here, he calls on Illinois lawmakers to pass legislation ending the injustice of juvenile life without parole sentences.

IN THIS country, there are at least 2,500 people waiting to die behind the walls of a prison who were incarcerated for crimes committed when they were juveniles.

Some were as young as 12, 13 and 14 years old when the crime they are accused of committing took place, yet they have still be sentenced to life without parole (LWOP). These are kids who have been told literally that they will never amount to any good and that they will never be worthy of being permitted back into society.

These issues are being put before Illinois state lawmakers as a result of legislation that would require juvenile offenders serving life sentences be afforded with hearings to determine if they were appropriately sentenced and to provide them with two or three hearings during their lifetime before an administrative judge or parole board. The legislation must be taken up in the coming week before the legislature's session ends.

Nearly a year ago, the U.S. Supreme Court released its decision in the case of Miller v. Alabama, which found that sentencing juveniles to mandatory natural life sentence violated the 8th Amendment to the U.S. Constitution banning cruel and unusual punishment. Illinois has just such a sentencing law. 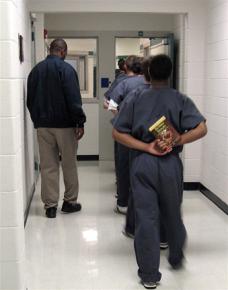 Human Rights Watch, which has taken up this issue, says: "The bottom line is that Illinois needs to reform the current sentencing scheme in a manner that handles juvenile cases differently then adult cases."

Scientific evidence supports the necessity of treating juveniles differently from adults in criminal cases. According to a 2008 Northwestern University report on juvenile life without the possibility of parole sentences in Illinois:

Cutting-edge brain research has confirmed that adolescents are more susceptible to rehabilitation than adults because their brains are not yet fully formed. The United States Supreme Court has declared the death penalty unconstitutional for juveniles, describing children as "categorically less culpable" than adults and more likely to change as they mature. And there is a rapidly growing consensus, within the United States and almost everywhere else in the world, that sentencing children to life without possibility of parole violates universal principles of human rights.

IN THE state of Illinois, there are 103 people serving juvenile LWOP sentences--confined and condemned to die inside Illinois prisons that suffer from overcrowding and deteriorating conditions brought on by neglect by prison administrators. Here are some of the cases:

Adolfo Davis was just 14 years old when he was arrested and charged in connection with a double murder. In 1990, Davis, who was living with his grandmother at the time and had to commit petty crimes to get money for food, admitted that he was a participant with two older men in what he thought would be a robbery. He never fired the gun he carried. Despite those facts, and his age, he was still tried as an adult, convicted and sentenced to life without parole.

Daniel Taylor was 17 years old when he arrested for a double murder in Chicago's Uptown neighborhood. Taylor could not have committed the crime, according to his lawyers from the Northwestern University Center on Wrongful Convictions--he has proof that when the double murder occurred, he was locked up in a police station on a charge of disorderly conduct. But because Taylor confessed to the crime under police pressure, prosecutors have been unwilling to release him from the LWOP sentence he received. He remains confined at the Menard Correctional Center.

Jamie Jackson was 17 years old when he was arrested and charged with a robbery and murder at a gas station. His fingerprints weren't found on the murder weapon, but he was found guilty and sentence to life without parole.

Joseph Rodriguez was 15 years old when he was picked up in connection with a double murder that was ruled to be gang-related. Rodriquez acknowledges that he committed this crime and has said he is sorry for the behavior that landed him inside prison. But he has still spent the last 32 years behind bars, and will die in prison unless the law changes.

Johnny Plummer was 15 years old when he taken to a Chicago police station and tortured until he confessed. His mother, Jeanette Plummer has served as his best advocate--in a recent emotional television interview, she stated, "My baby was just 15 years old, they beat him, they made him to confess, and they know it...Now they need to let my baby come home." Today, Plummer remains incarcerated in Menard Correctional Center, where he has spent over two decades of a natural life sentence.

I BELIEVE that a parole system must be established for juveniles sentenced to prison to die. Today, there is hope with legislation in the Illinois General Assembly that would change sentencing laws to conform with the U.S. Supreme Court decision and give juvenile offenders sentenced to LWOP another chance.

As a former juvenile lifer who spent 28 years in prison after being tortured by Chicago police in 1981, I traveled to Springfield to support this legislation with Joseph Rodriguez's sister Cathy. Joe has served more time then many adult offenders convicted of murder. When he first entered the prison system in 1982, it offered some form of rehabilitation. Today, however, prisons amount to warehousing human beings for profit.

Cathy was there to ask lawmakers to have a heart and show mercy to her brother and all who those who serve this sentence. The legislation would make sure juvenile offenders with LWOP sentences would have hearings before a administrative judge or parole board once they have served 10 to 15 years inside a prison.

The unfairness of this sentence is clear from the fact that some of these prisoners had co-defendants who were older than them and were able to make plea deals to receive lesser sentences. In some cases, they are out of prison, while the the juvenile offender remains incarcerated for life.

Another sign of the injustice is that 74 percent of youth offenders sentenced to natural life in Illinois are African American, more than 78 percent sentence of juvenile LWOP sentences are imposed in Cook County, where Chicago is located.

Prosecutors and judges view the juveniles they sentence to natural life as people who cannot be changed, but studies have proven this to be untrue. It was Illinois legislators who voted to remove rehabilitation from prisons where inmates are serving long sentences, and it must be the Illinois legislators who provide second chance to the kids sentenced to die behind prison walls.