In Big Brother we trust?

Barack Obama has promised that he'll protect us from government surveillance programs that invade our privacy and violate our rights. Does anyone believe him?

BARACK OBAMA wants us to trust him to protect our rights--but he and his administration have proven why no one should.

As the weeks have gone by since the bombshell revelations about the National Security Agency (NSA) first emerged last spring, every new exposé has revealed the vast scope of the government's spying programs--and it's far broader than our Democratic president ever hinted at.

Instead of admitting this abuse of power, the Obama administration has concentrated on smearing the messenger. NSA leaker Edward Snowden has been turned into public enemy number one--hounded across the globe with threats that he will be tried for treason and locked away for the rest of his life if he ever returns to the U.S. In reality, this is only the most visible example of the administration's wholesale war on whistleblowers, while the real crimes--against our rights, carried out by the secretive Big Brother agencies like the NSA--go unpunished.

Last week, Obama was forced to comment on the spying programs--a sign of the importance of what Snowden and journalists like Glenn Greenwald have revealed to the world. But Obama downplayed the ongoing attacks on our privacy and civil liberties--while telling the American people that he can be trusted to protect them. 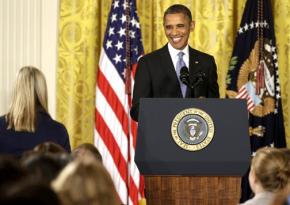 The mainstream media has largely failed to ask any hard questions of the Obama administration--on the contrary, it has been little more than a mouthpiece for those in power. That makes it all the more important for ordinary people to speak up against Washington's war on our rights--no matter whether the attacks are coming from Republicans or Democrats.

AT HIS August 9 press conference, Obama vowed to implement new safeguards against government surveillance and the intrusion into our daily lives. But against the backdrop of ongoing revelations and the persecution of Edward Snowden, who remains in Russia after having sought asylum, Obama's promises rang hollow.

Snowden's information, publicized with the help of Guardian columnist Glenn Greenwald and filmmaker Laura Poitras, revealed that every phone call, e-mail and Internet search in the U.S. is being vacuumed up--if not the actual content, then the "meta data," like ISP addresses and records of who gets calls and e-mails, when and from whom. Then there's the government program known as "Prism" that has allowed the government to access the servers of major U.S. Internet companies, including Google, Facebook, Skype, Apple and others.

Government officials have repeatedly claimed that such programs don't represent an encroachment on civil liberties because the NSA is simply gathering "meta data," not the actual content. But recent revelations show the government is searching through the content of every e-mail sent into or out of the U.S.

According to a New York Times report earlier this month, the NSA is "temporarily copying and then sifting through the contents of what is apparently most e-mails and other text-based communications that cross the border." This includes e-mails sent by and to U.S. citizens not named in secret court warrants.

This is in direct contradiction to NSA Deputy Director James Inglis' claim in front of the House Intelligence Committee in June that the NSA doesn't "target the content of U.S. person communications without a specific warrant anywhere on the earth."

According to another exposé, at least some of the data being collected by the NSA has been used in law enforcement operations--without those caught in the crossfire ever being aware of it.

Reuters reported recently that a secret unit of the Drug Enforcement Agency called the "Special Operations Division" is "funneling information from intelligence intercepts, wiretaps, informants and a massive database of telephone records to authorities across the nation to help them launch criminal investigations of Americans."

Some two dozen "partner" agencies make up the unit--including "the FBI, CIA, NSA, Internal Revenue Service and the Department of Homeland Security--leading experts to believe that some intelligence information may be coming from NSA wiretaps.

To cover up where the information came from, however, federal agents "are trained to 'recreate' the investigative trail," reported Reuters--making it appear as though a traffic stop of a suspect was coincidence, for example, rather than planned as a result of data obtained through wiretapping or other forms of government surveillance. "If defendants don't know how an investigation began," Reuters reported, "they cannot know to ask to review potential sources of exculpatory evidence--information that could reveal entrapment, mistakes or biased witnesses."

This gives the lie to the claim by government officials that information gathered in government spy operations is being used against "foreign" terrorists as part of the "war on terror."

The bottom line is that no one knows for sure the real extent of government surveillance, how much information is being collected and from where, and to what extent various Internet and telecommunications companies are willingly handing over data--because the Obama administration believes, fundamentally, that the public doesn't have a right to know.

YET OBAMA doesn't think the American people have any cause for alarm. After all, we have his word that we can trust him.

The president's press conference reached new heights of condescension when Obama compared those upset about attacks on civil liberties to...the First Lady being upset about him not doing the dishes: "The question is how do we make the American people more comfortable? If I tell Michelle that I did the dishes...and she's a little skeptical, well, I'd like her to trust me, but maybe I need to bring her back and show her the dishes and not just have her take my word for it."

Meanwhile, Obama's supposed "reforms" to government spying programs include having phone companies, rather than the NSA, store the information, or reducing the number of years that records are kept for. But, of course, the spying and data collection itself is the problem--not how long the information is kept and by who.

There's no reason to believe that major U.S. Internet or telecommunications companies can or would refuse to comply with government orders to hand over information. As computer security expert Bruce Schneier wrote for Bloomberg.com:

The NSA is...in the business of spying on everyone, and it has realized it's far easier to collect all the data from these [Internet and telecommunications] corporations rather than from us directly. In some cases, the NSA asks for this data nicely. In other cases, it makes use of subtle threats or overt pressure. If that doesn't work, it uses tools like national security letters.

We got a further taste of the aggressiveness of government surveillance this week when Lavabit, the Texas-based encrypted e-mail service used by Edward Snowden, announced it was suspending its operations rather than comply with what CEO Lavar Levison called an unjust secret court order by the government to hand over access to its users' information.

"I wish that I could legally share with you the events that led to my decision," Levison wrote. "I cannot. I feel you deserve to know what's going on--the First Amendment is supposed to guarantee me the freedom to speak out in situations like this. Unfortunately, Congress has passed laws that say otherwise."

As Glenn Greenwald asked, "Does that sound like a message coming from a citizen of a healthy and free country? Secret courts issuing secret rulings invariably in favor of the U.S. government that those most affected are barred by law from discussing? Is there anyone incapable at this point of seeing what the United States has become?"

Though you would never guess it from the tone of the mainstream media's coverage, Obama's press conference was actually a defense of government spying programs, with the president making a point of reiterating that this kind of government surveillance is permitted under the Bush-era USA PATRIOT Act.

In this respect, Obama's promises to increase oversight of government spying mean little. As the Financial Times reported, "[R]ather than scaling back the NSA's eavesdropping, as Mr. Snowden and other critics have demanded, in reality, Mr. Obama is trying to entrench the programs by establishing stronger political legitimacy for them."

Obama also spent a lot of time denouncing Edward Snowden--whose act of bravery is what exposed the scope of NSA surveillance programs. But Obama claims he himself would have revealed the extent of government surveillance programs, if he had been given the chance. "Mr. Snowden's leaks triggered a much more rapid and passionate response," Obama said, adding that without the revelations, "it would have been less exciting, and it would not have generated as much press."

But who could possibly believe that Obama was going speak up about the spies who work for him? As Jennifer Hoezler, the former deputy chief of staff for Sen. Ron Wyden (D-Ore.), wrote in a post on the Techdirt website:

DESPITE THIS, the mainstream press has been largely uncritical of Obama--and unquestioning about government assertions that surveillance programs are necessary in the "war on terror."

Take CBS's Bob Schieffer. On August 11, the Face the Nation host invited former Gen. Michael Hayden, the one-time head of both the NSA and CIA, as well as Republican Rep. Peter King and Democratic Rep. Charles Ruppersberger--all proponents of domestic surveillance programs--to discuss the NSA controversy. Two weeks before, Schieffer had publicly accused Edward Snowden of "putting the nation's security at risk and running away."

Speaking of running away, however, not a single criticism of the NSA was aired on the August 11 show, nor a single voice heard raising concerns about government overreach or the erosion of civil liberties. Schieffer himself argued against an oversight authority on the secret Foreign Intelligence Surveillance Court--on the grounds that it might hold up a hypothetical, time-sensitive investigation into an imminent terrorist attack.

As Glenn Greenwald commented: "Bob Schieffer is a more slavish, shameless spokesman for the NSA than anyone actually employed by that agency. But what one really finds here is a reverence for military officials like Michael Hayden so extreme that it's actually uncomfortable to watch."

Edward Snowden put it exactly right in an e-mail interview with Peter Maass, writing for the New York Times Magazine:

After 9/11, many of the most important news outlets in America abdicated their role as a check to power--the journalistic responsibility to challenge the excesses of government--for fear of being seen as unpatriotic and punished in the market during a period of heightened nationalism. They say it makes the world safer, but it really makes us less safe to have a government that's so powerful it can invade privacy and justifying whittling away our civil liberties in the name of "freedom."

That's why Snowden is a hero--and "insider" journalists like Schieffer deserve contempt for their role in justifying the Obama administration's unprecedented attacks on our civil liberties.

As filmmaker Laura Poitras--who along with Greenwald publicized Snowden's leaked information about the NSA--told Maass:

Do I think the surveillance state is out of control? Yes, I do. This is scary, and people should be scared. A shadow and secret government has grown and grown, all in the name of national security and without the oversight or national debate that one would think a democracy would have.