For all my liberation

Diana Méndez reviews a novel that never shrinks from the defects we all have.

BEFORE I sat down to write this review, I took a look through SocialistWorker.org's Books and Entertainment section for inspiration. It left me wondering, "Do these people not read novels?!"

It is of no matter: make an exception and read this one.

"Honest" is definitely my descriptor of choice for this book. It shows people with high ideals doing really awful things, things that have nothing to do with who they think they are. It shows humans in all their contradictory glory. Dare I bandy about the D-word? Could this be a truly dialectical novel?

We see people with the highest principles beat their partners; we see people with the best political analysis abuse their children. We are presented with revolutionaries as complex and human and lovable and hate-able, all at once. We see how progressives fall prey to the same sexist ideas as everyone else, which is made worse, of course, by the contrast.

Aside from the clever references to Marx, Lenin, the dialectic and many true-to-life portraits of activists I also know, this book did something unexpected. It described anger. The kind of anger that you inherit and that runs through your blood and somehow ends up controlling your fists and making them hit what or whom you hold most dear. 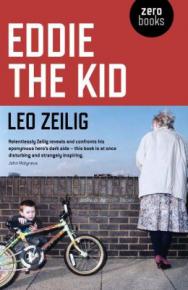 For a moment, I understood Eddie--or at least where he was coming from and more precisely how that anger felt. I think that a novel with a Marxist bent does a fantastic job at looking at conditions and personalities. The romantic part of me really wanted a conventionally happy ending. However, that would not have been true-to-life enough for this book.

There are just some things that, once done, cannot be taken back, and sometimes people get and stay broken. The women in the novel, each in their own way, realize this and make the decision to leave abusive relationships. Thank you for the strong women.

THERE ARE a few stories here. We have activists protesting a war and coming up against the might of the state. Throughout the book, Eddie, the protagonist and narrator, is awaiting trial for inciting antiwar protesters to tickle the police. He could be sentenced to five years in prison. "We had numbers and humor, but the police had fences, metal and armor." Funny, that particular story sounds like one we've heard before.

The stories unfold along two parallel planes. On one plane, we learn about Eddie's "present," attending activist meetings, experiencing disappointment when protests fail to avert war, getting inside his relationship with Rebecca and his sister Esther. On the other plane, we are taken back to the story of Eddie's parents, Jessica and Stewart, which eventually leads to a family--a son, Eddie, and a daughter, Esther.

We read about sitting in the backseat while parents burst into an argument. We see powerless kids faced with verbal and physical violence at the hands of a daddy with two moods. The alternating between the two planes really lets us ponder the effects our childhoods can have on our lives, and how our lives in turn affect the people who know us. "He broke his daughter. Perhaps it did something to us all; set in motion his sickness, Esther's madness, my violence," wonders Eddie.

The book is not entirely dark and sad. There are moments of laughter and unrestrained happiness, too. Mark Ridgeway is a lawyer, Eddie's close friend and also an activist. Their relationship is wonderful, and Eddie is obviously in awe of him. "We would dance when we met; the excitement of seeing each other made us want to move, to gyrate a little...our joy and dancing sometimes exploded...into touching on public highways."

Eddie proffers a standing offer of a blow job--for friendship's sake--that he later comes to realize wasn't "really so subversive...Even my blow job declaration fell into a certain macho norm...For all my liberation, I ended up at the same place as everyone...our genitalia."

"For all my liberation." That line really stuck with me. For all their liberation, the characters in this book still made mistakes, hurt each other and acted like royal assholes sometimes. It is that which made me read this book as quickly as I could, and I missed it when it was over. You will see yourself and people you know in this book. You will become attached to them, and I daresay you will miss them, too.