Paying the price for the ACA

The introduction of the "insurance exchanges" set up by the Affordable Care Act (ACA)--the "virtual stores" where the uninsured are supposed to be able to comparison shop for health care coverage--are showing everything that's wrong with Barack Obama's health care law.

The exchange websites have been plagued by problems that won't be fixed for weeks--as a consequence of the byzantine complexity of a 2,000-page law where the priority is preserving the role of the private insurance industry. When the uninsured are able to consider their options, they're finding that the "choice" is no choice at all--sign up for still-expensive health plans that contain all kinds of provisions like co-pays and deductibles that make them even more expensive, or stay uninsured and pay a fine on their taxes.

Part of the rationale for the ACA is that the exchanges would bring younger people, who tend to be healthier, into the system, where their premiums would allow the insurance companies to provide less expensive coverage for older people who need more health care. But there's a flaw in the argument: Instead of healthier people subsidizing health care who have a greater need for it, they're also subsidizing the bottom lines of the health insurance companies.

Gary Lapon asked three young adults about their experiences with the health care system and with the ACA: Spring is a 34-year-old freelance makeup artist living on Staten Island in New York City. She is pregnant; she and her husband are expecting their first child in February 2014. Brian is 27 years old and lives in Washington, D.C., where he works full time at a bicycle shop. Melissa is 32 years old and lives in Oakland, Calif. She currently works in retail in San Francisco.

HOW WOULD you describe your current health care situation. Are you insured and do you have access to care? What is that like?

Spring: I'm "self-employed," so I have to pay for individual health care. Because my husband and I were planning to get pregnant, we got the only plan we could afford that has maternity coverage, which is over $300 a month.

About two months after finding out we were pregnant, I got a notice that the health care plan that I have will be discontinued as of January 1, 2014. That's just over a month before I'm due to give birth. Their excuse was that they no longer will cover "sole proprietors"--meaning small business owners with no employees, which I am. We tried to find a new plan to replace this one that included prenatal/maternity coverage, but the cheapest plan started at over $1,000 a month, which is way out of our price range.

Brian: I currently don't have health insurance and haven't for almost two years. My employer is small and doesn't offer health insurance. I'm fairly healthy, although my lifestyle of bicycling everywhere puts me in a vulnerable position. 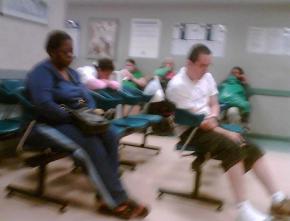 I was hit by a car in late February of this year and broke my heel. Fortunately for me, it was the driver's fault, and his insurance company paid for my treatment after six months of legal disputes, though I had to incur that debt during those six months. It cost me hundreds of dollars for 10 minutes of care every week. For six months, I was on crutches. Normally I ride my bike everywhere, so a 30 minutes commute via bicycle became a 60 minutes bus ride.

I got calls from the hospital almost every week, with new and confusing bills I had to pay and put on my credit card, which gained interest. Every time I went in for a regular checkup, it was $200 to $300 each time, when I really only had about 5 to 10 minutes with the doctor--from what I hear, that was a good deal. All my bills came to about $10,000 total! I had to really tighten my belt on everything that I did during those six months. It gave me an insight into the industry--even most receptionists had no idea how much out of pocket an appointment would be.

Melissa: I'm uninsured. I got my bachelor's degree two years ago and planned to teach ESL, but ESL programs have taken a huge hit since public schools have faced severe budget cuts, and now I'm left with $36,000 in student loans and meager job prospects, much like others in my graduating class.

The thing is, I was 30 when I graduated, so I'm not eligible to be covered by my parents' insurance like many in my cohort--the Affordable Care Act enables people to remain on their parents' health insurance until they reach age 26--assuming their parents have insurance anyway.

I work in a small retail shop in San Francisco, but since I can't afford to live there, I can't get HealthySF, the city insurance for low- to medium-income people. I've gone back to a community college in Oakland to get training in machining, in the hopes that I can get a job with insurance soon.

HAVE YOU ever gone without care due to a lack of health insurance?

Brian
: Not really. When I have gotten sick, I just try my best to make it go away--ha ha.

Melissa: Fortunately, I live in an area of the country with some decent clinics. I can go to the Berkeley Free Clinic for some very basic care, but not much beyond that.

I have a genetic condition that, while usually mild, can potentially have serious health complications. The seriousness can be mitigated if the complications are caught early, but that requires me to have an EKG more frequently as I get older. The last time I was due was last year. My grandmother died at 56 from this disorder, and my uncle almost died at 48. That's when everyone in my family got tested, and I found out I had it.

I also wear glasses, which the ACA doesn't cover either. Same for dental. It also has very restricted mental health coverage. It's like they don't care if I'm blind, crazy, and my teeth fall out, as long as the rest of me is fit for work.

I was in a bicycle accident last year and sustained a concussion, even with my helmet on. I didn't go to the hospital; I just talked to my sister, who is a doctor, on the phone for some advice. People tell me that if I'm in another accident and it's bad, I'll wish I had paid for the insurance then. But I seriously can't afford to spend another $100 every month. And even if I could, the cost of the co-pays would keep me from going anyway. Why should I pay for something I can't afford to use?

Spring: Until this year, I went without health care coverage for as long as I've been a freelancer, which is about eight years. I've never been able to afford coverage for myself, and previously had coverage through employers or Medicaid. Once I became self-employed, I no longer qualified for Medicaid, although my income was low.

WHAT DO you think of our options under the Affordable Care Act?

Melissa: I feel pretty confident compared to most, but I'm no expert. The one thing I do know is that I can't afford insurance through it and I'm going to get fined because of it. And I think that's the case for a lot of people.

Spring: The ACA is very confusing, especially when it comes to what types of coverage an individual qualifies for, and how to go about actually getting coverage. I know that I can't be denied because of a pre-existing condition, and that the income level that qualifies for Medicaid has been raised, and I now qualify for Medicaid. The fact that I have to have coverage or face a penalty is ridiculous, and financially penalizes the poor and those who can't afford it.

Brian: I don't feel totally confident that I know my options. However, I'm sure I will become more well-versed as I go through the process a little more.

I do understand it as a handout to insurance companies. All of the sudden, working people will have to shell out a fair amount of money for private insurance, which have some of the highest profits of all companies. There are good things in the bill, like you can't be denied insurance for pre-existing condition, but that won't matter if you can't afford insurance.

HAVE YOU signed up for insurance via the insurance exchanges? If not, do you plan to?

Brian: I've applied for DCHealthLink.com for assistance. I have yet to hear back, but according to estimates, if I don't get assistance, I'll have to pay $200 per month for the most basic plan. This would be a huge chunk of my monthly income, including my rent and other bills. I've thought about just paying the penalty, because that's $95 a year--for now, I know it will be going up in the coming years.

I definitely will be in a worse financial position than I was before. It will be much harder to nearly impossible to be able to save money for either purchasing a place to live and having a family in the future.

It's hard to say how all this will impact my decision-making. I'm sure I will have to pick and choose the food I get and times that I go out to do things. I really want insurance, and it's really hard to be in a position to have to choose how much I value my health.

Spring: I signed up for insurance via the New York exchange website. It proved to be confusing and very time-consuming, and it used terms that I've never heard before. It also had many technical glitches that made it difficult to complete the application or go back in and update information.

I'm forced to use this option because my current insurance is being canceled as of January 1, 2014, and there are literally no comparable plans available. This is directly connected to ACA, as insurance providers are discontinuing their low-rate plans and waiting until January 1 to roll out new ones. To add me to my husband's employer-provided insurance would be $1,000 a month--way outside our budget.

The best part of ACA is that I now qualify for Medicaid. The worst part is that I won't hear back on my application until as late as mid-December, leaving only a couple weeks before I am cut off from my current provider. With a baby due in February, it is very stressful to have to depend on the government to provide insurance on time, and it leaves me potentially without coverage right before our baby is due.

If anything goes wrong with the application, and it ends up that I am not eligible for Medicaid, I will literally have to find new insurance in two weeks, which is impossible.

Melissa: I've decided I'm going to remain uninsured and pay the penalty. I'm pretty sure I'll have a job with benefits before the end of next year, so it'll probably be a one-time thing for me. But I'd still rather spend the penalty money on something that would actually help me--new running shoes or even a donation to the Berkeley Free Clinic.

I feel like I'm being robbed. My options are to pay for something I can't use or pay a fine for not buying something? That sounds like a scam.