Casualties of the Texas anti-abortion crusade

Elizabeth Clinton and Mattie Williams report from Texas, where the impact of new restrictions on abortion rights passed by the legislature last summer are becoming clear.

TEXAS WOMEN and others seeking abortions now have fewer reproductive rights than they did before legislation went into effect this month, resulting in clinics having to turn away hundreds of patients.

"This is heartbreaking for us on so many levels," Amy Hagstrom Miller, founder and president of Whole Woman's Health, told the Star-Telegram. "Women who need our care will now have nowhere to turn and the staff and physicians in our clinics now face furlough and likely unemployment."

Whole Woman's Health was forced to close clinics in Fort Worth, McAllen and San Antonio as a result of new restrictions on abortion providers in the state of Texas.

On October 31, a three-judge appeals court panel overturned an injunction that blocked implementation of a provision of the state's new anti-abortion law that requires abortion providers to have hospital admitting privileges within 30 miles of their clinic.

The restriction is among several draconian provisions in the sweeping legislative assault on access to safe, legal abortion in the state of Texas that was fought out in the state legislature earlier this summer. Other provisions include a 20-week ban on abortion; heightened restrictions on medication abortions, the most common type of abortion during the first trimester; and requiring abortion clinics to be certified as ambulatory surgical centers. 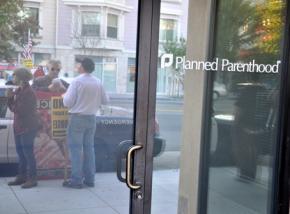 On October 28, just hours before it was set to go into effect, federal district judge Lee Yeakel issued an injunction against the hospital-admitting privileges portion of the law, stating that it placed an undue burden on women trying to obtain abortions. Within days, though, the state appealed to the right-wing Fifth U.S. Circuit Court of Appeals to overturn the injunction.

According to estimates, if the surgical ambulatory requirement provision of the legislation goes into effect on schedule in September 2014, Texas will have only five clinics for the entire state, which is 268,820 square miles and has 26.1 million residents.

But clinics and patients are already feeling the effects of this law. Workers at the clinics who thought their jobs were temporarily secured by the October 28 injunction woke up on November 1 to find that many clinics across the state were closed, and their jobs had been destroyed.

Since the provision went into effect, there are now only six counties out of 254 that have abortion clinics. There are now no clinics in Fort Worth, the Rio Grande Valley and many parts of West Texas.

DURING LAST summer, the Texas state legislature held two special sessions--to debate State Bill (SB) 5 and House Bill (HB) 2--to try to limit women's reproductive choices. Over nearly a month, thousands of women and allies descended on the Capitol to protest the misogynistic bills. Many protesters practically lived at the Capitol building during this time, and people throughout the state rallied in their towns against the legislation.

While SB 5 was being debated during the first special session called by Gov. Rick Perry, hundreds of people journeyed to Austin to testify against the bill. Protesters held teach-ins, rallies, drum circles in the rotunda and marches. What finally blocked SB 5 from being passed was "the people's filibuster"--the bill was literally shouted down by protesters who yelled so loudly that a vote couldn't be taken before the midnight deadline for the legislation to pass.

Gov. Perry immediately called for a second special session and made it clear that he wanted this legislation passed, saying, "Texans value life and want to protect women and the unborn." This is an ironic and disgusting statement coming from a man who has so harmed millions living in his state--overseeing the execution of hundreds and denying funds from the national Medicaid Women's Health Program to low-income women throughout the state, to name a couple examples.

During the second special session, well-funded anti-choicers bussed protesters in from across the nation, creating a much more tense situation in the Capitol. Security was tightly controlled--on the day that HB 2 was passed, people weren't allowed to carry in fliers, and many people reported having their tampons and pads confiscated.

"I have rarely, if ever in my life, felt so violated," said Kristi, a protester who had her tampons confiscated. "To them, our tampons were now a dangerous weapon to be used against the state...I wanted to yell and scream and shout. But I felt that under the folded arms of a trooper, my voice and body were not my own; that these men, in this chamber owned me, and I was not allowed to speak.

People did speak--and yell, shout and stomp their feet. Yet the state of Texas passed the legislation anyway.

ON SEPTEMBER 26, abortion providers from around the state filed for a permanent injunction against provisions relating to hospital admitting privileges and regulations on medication abortions in HB 2. The provisions pertaining to the 20-week ban and surgical ambulatory standards weren't challenged.

On October 28, Judge Yeakel issued an injunction against the hospital admitting privileges provision and issued an exception to the regulations relating to medication abortion.

Under the provisions that were disputed, abortion providers would be required to have admitting privileges at a hospital no further than 30 miles from the clinic that provide obstetrical or gynecological health services.

The portion pertaining to medication abortions would require abortion providers to follow the FDA protocol rather than the off-label protocol. This will make it more difficult for women to obtain abortions. In addition to meeting other requirements, women would be required to make three trips to their abortion provider instead of two, and the length of time under which medication abortion would be allowed would shorten by two weeks.

Women would also have to take at least one dose of the medication at the provider's office and would have less control over the timing and location that the abortion was induced. Those seeking abortions would have to take larger doses of the drugs, and the cost would go up.

Judge Yeakel based his ruling on whether or not these provisions constituted an undue burden upon the woman exercising her right to choose, thereby making them unconstitutional. In his final ruling, Judge found that the hospital admitting-privileges provision of HB 2 "lacks a rational basis and places an undue burden on a woman seeking an abortion."

Yeakel's ruling stopped this provision of the bill from going into effect the next day, October 29, and it saved a dozen clinics without admitting-privileges from having to close their doors that day. But the abortion ban after 20 weeks and the new regulation around medication abortion went into effect.

Immediately after Yeakel's ruling, Texas Attorney General Greg Abbott filed an emergency appeal with the Fifth U.S. Circuit Court of Appeals, a notoriously conservative court. A few days later, the Fifth Circuit lived up to its conservative reputation and stayed Yeakel's decision on the unconstitutionally of hospital privileges.

Almost a dozen clinics across the state closed their doors on November 1 as a result.

THE THREE appeals court judges who heard the case, Priscilla Owen, Jennifer Elrod and Catharina Haynes, were all George W. Bush appointees, and ironically, all of them are women.

Judge Owens has a particular track record to answer for--she is one of the judges who infamously dismissed a wrongful discrimination lawsuit against a school that punished a young woman who was a cheerleader and refused to cheer for her rapist.

In their decision on the anti-abortion law, the judges claim the hospital admitting privileges restriction is designed to add a layer of protection for women. But this flies in the face of the experiences of actual medical professionals. Jennifer Carnell, an emergency room physician at Ben Taub Hospital in Houston, Texas, testified in district court that she has never had an occasion to consider whether an incoming patient's physician has admitting privileges at the hospital.

When their arguments are broken down, it becomes apparent that nothing in the anti-abortion law's provisions actually improves health care for pregnant women.

On the contrary, requiring already licensed physicians to obtain additional permissions to practice is redundant from most perspectives--unless you're a paid "expert" for the Religious Right or a politician paid to uphold the system.

Lacking actual science, supporters of the law invented all sorts of justifications to restrict abortion access. Anti-choice activist Dr. John Thorp stated that the hospital admitting privileges were to "ensure that only physicians credentialed and board-certified to perform procedures generally recognized within the scope of their medical training and competencies" would provide abortions.

Thorp also noted that due to the "unique nature of an elective pregnancy termination and its likely underreported morbidity and mortality, it's appropriate and necessary to provide increased provider safeguards through hospital credentialing and privileging." But Thorp didn't name a single case where there was an unreported death from a legal abortion, or any doctor abandoning a patient.

The appeals court ruling acknowledges that, as a result of the anti-abortion legislation, costs and travel times will increase for people trying to obtain abortions--some will have to travel more than 150 miles and make repeat trips. The judges also acknowledged that the number of counties with available abortion clinics would be drastically reduced.

ACROSS TEXAS, abortion clinics are being forced to close or scale down their operations. One of these clinics is Planned Parenthood in Lubbock. Lubbock is the largest city in mostly rural northwest Texas, and many people from around the region have relied on this clinic.

Reproductive health care in Lubbock was already on the decline after 2011, when Texas stopped receiving federal funds through the national Medicaid Women's Health Program after Texas refused to provide funds to Planned Parenthood.

Two former Planned Parenthood facilities in Lubbock have been taken over by Generation Healthcare, a Texas nonprofit group that specializes in adoption and is an arm of Generation Covenant and Adoption Covenant. Texas now has a state-run women's health program for low-income women called Texas Women's Health Program; Generation Healthcare receives funding through this state program.

HB 2 has dealt a severe blow to the access of safe, legal abortions in Texas--but reproductive choice was under attack long before.

Whole Women's Health in Fort Worth couldn't provide any services as of November 1 after the October 31 ruling. The clinic reported that of 15 patients scheduled for that day, 14 of them said they would most likely continue their pregnancies because they could not afford to travel elsewhere.

Planned Parenthood states on its website: "The restrictions have forced us for now to stop offering medication abortion while we determine our next steps."

Abortion clinics around the state of Texas have already filed an emergency request with the U.S. Supreme Court for an injunction against the law. But this alone won't be enough.

The fightback against these bills earlier this summer and the defeat of SB 5 by a movement led largely by women demonstrates that we can fight and we can win. However, a challenge to HB 2 and the never-ending attack on abortion rights will require organizations and coalitions throughout the state and nation that can sustain a fightback.

We need to become a reproductive justice movement that is not beholden to the Democratic Party nor content with waiting on the courts. We need a grassroots movement that actively fights back--and seeks to win the repeal of all abortion restrictions.