Academic freedom and the ASA boycott

The backlash came fast and furious against the American Studies Association (ASA) after it passed a historic resolution in mid-December supporting an academic boycott of Israel. Among the many newspapers condemning the ASA's vote in editorials were the Washington Post and Los Angeles Times. Likewise, numerous university presidents, such as Purdue University's Mitch Daniels and Indiana University's Michael McRobbie, criticized the vote. McRobbie even took the step of unilaterally suspending the ASA membership of Indiana University's American Studies program. In this statement, a group of academics in Indiana respond to Daniels' and McRobbie's criticisms.

MITCH DANIELS, speaking as president of Purdue University, and Michael McRobbie, representing Indiana University, have condemned the American Studies Association for its decision to boycott Israeli universities for their complicity in the illegal occupation of Palestine.

Daniels said the American Studies Association action was "as clear a violation of academic freedom as one can imagine," and McRobbie said that the resolution will have a "chilling effect on academic freedom."

Daniels and McRobbie are wrong. The American Studies Association resolution violates no one's academic freedom. The resolution is directed only at Israeli institutions, not individuals, and has no bearing on research and scholarship.

As the American Studies Association has written, the boycott is "limited to a refusal on the part of the ASA in its official capacities to enter into formal collaborations with Israeli academic institutions, or with scholars who are expressly serving as representatives or ambassadors of those institutions (such as deans, rectors, presidents and others)." 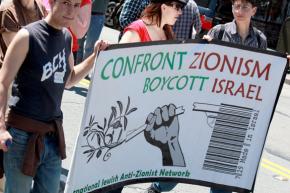 We are expressly not endorsing a boycott of Israeli scholars engaged in individual-level contacts and ordinary forms of academic exchange, including presentations at conferences, public lectures at campuses, and collaboration on research and publication. U.S. scholars are not discouraged under the terms of the boycott from traveling to Israel for academic purposes, provided they are not engaged in a formal partnership with or sponsorship by Israeli academic institutions.

What the resolution does is recognize the role of Israeli universities in discriminating against Palestinians and actively participating in an occupation that has been condemned as illegal by the United Nations.

-- Israeli universities provide the military-intelligence establishment of Israel, as Omar Barghouti has noted, with research--"on demography, geography, hydrology and psychology, among other disciplines--that directly benefits the occupation." Israeli universities also commit acts that contravene international law, such as the construction of campuses or dormitories in the occupied Palestinian territory, as Hebrew University has done.

Israeli universities systematically discriminate against Palestinians. While Palestinians make up 20 percent of the population of Israel, they are less than 10 percent of the university student body, and less than 1 percent of campus staff. According to Uri Jacobi Yeller, "Palestinian applicants are three times as likely to be rejected by Israeli academic institutions than Jewish applicants." Palestinians are discriminated against in allocation of dormitories, which is based largely on military service. Similarly, most scholarship and grants to Israeli universities are based on service in the Israeli Defense Force.

Israeli universities have tried to repress campus activity perceived as anti-Israel or pro-Palestinian. Israeli historian Ilan Pappe was asked by the president of the University of Haifa to resign after he came out in public support of the boycott, divest and sanctions movement. Pappe instead left Israel for a position at for a position at Exeter University in the U.K.

Scholars and students at Palestinian universities have almost no academic freedom and work under constant threat. As Riham Barghouti and Helen Murray have written, Palestinian students and scholars are subject to "closure of institutions, military obstruction of access, arrests and deportations, the killing and injuring of students and teachers and attempts to criminalize the Palestinian educational process." In December 2008, Israeli bombed the Islamic University of Gaza, destroying six buildings, including a research lab and women's dormitory.

FOR THESE reasons, more than 800 of the leading scholars in the world voted in an open election by a 2-1 margin to support the American Studies Association boycott of Israeli universities. As UCLA historian Robin D.G. Kelley wrote in support of the resolution, "Much like the academic boycott of South Africa during the apartheid era, the point of the resolution is to pressure academic institutions and the state, complicit in the policies of occupation, dispossession and segregation to comply with international law and make real academic freedom possible."

In fact, the greatest threat to academic freedom related to the boycott resolution has come from U.S. university presidents. Kenyon College President Sean Decatur and IU President McRobbie have reportedly suspended their American studies programs' membership in the American Studies Association as a result of the ASA's democratic vote. McRobbie has reportedly done so without any consultation with American Studies faculty, a chilling violation of faculty governance and academic freedom. The next thing we might imagine are university presidents closing entire academic programs because of actions taken by professional organizations with which they disagree.

Daniels, meanwhile, said Purdue officials are "checking into" whether Purdue departments have affiliations with the American Studies Association.

Any move by the university administration to override faculty, student, program or department policy or democracy would clearly undermine academic freedom and faculty governance at Purdue.

The American Studies Association membership should be applauded for joining the struggle for Palestinian equality as one of the most important global civil rights campaigns of our time, and for voting to extend and protect academic freedom for those who do not have it.

Purdue, IU and all universities should do the same.