The American way of violence and injustice

For millions, the outrage of what happened in Ferguson will never be forgotten.

PREACH PEACE and practice violence--that's the motto of the American political and legal establishment.

McCulloch had the nerve to talk about the need for constructive dialogue about tensions between the police and communities of color as protesters in the streets of Ferguson were confronted by police in riot gear and tanks filled with soldiers from the Missouri National Guard.

Barack Obama urged anyone angered by the grand jury decision to heed the call of Mike Brown's parents to remain peaceful--only a few minutes after Brown's mother, Lesley McSpadden, screamed in anger and pain after hearing McCulloch announce that her son's killer wouldn't be charged with any crime at all.

The president who has ordered bombs dropped on seven countries and whose administration has directly assisted in the militarization of police departments like Ferguson's across the country then explained that "there is never an excuse for violence." 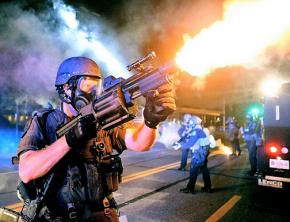 The people in positions of political power in the U.S. talk endlessly about the importance of peace and the rule of law. But their actions, here and around the world, speak louder than their words--and the message is that there's no law for those in charge of the law.

The announcement that there would be no indictment of Darren Wilson was the culmination of a three-month-long sham that wasn't meant to find justice, but to distract protest. As one frequently repeated line on Twitter put it: "It doesn't take 100 days to decide if murder is a crime, it takes 100 days to figure out how to tell people it isn't."

Robert McCulloch and the criminal injustice apparatus in Missouri clearly had no intention of putting Darrin Wilson on trial. The charade of the long grand jury process was played out in the hopes that Mike Brown's supporters would lose momentum.

People continued organizing through the fall, bringing activists from all over the country together for "Ferguson October," a whole month of actions and activities. When the grand jury decision was announced, there were thousands of people who were prepared to take the streets in anticipation of the outcome they expected and feared--but which still landed with the force of a punch to the stomach.

The media predictably focused that night on the fires set in Ferguson and the store windows broken in St. Louis. But the message of the protesters wasn't violence, but its opposite: the rule of law should be applied to those who are supposed to enforce it.

The next day, despite all the media's fear-mongering about violent protests, the demonstrations in cities across the country were even bigger and more determined--numbering in the thousands from Seattle to Boston, Atlanta to Portland, Austin to New York City. Across the country, people wanted to send the message again--that they wouldn't be intimidated into silence.

DURING THEIR sensationalized coverage of the nights of unrest in Ferguson and St. Louis, many media commentators self-righteously invoked the memory of Martin Luther King as a paragon of nonviolent protest. None of them managed to recall what King had to say in a 1968 speech:

King didn't agree morally with the riots, but he understood that they were an inevitable response when injustice went unaddressed--and that they also succeeded in bringing attention to the plight of the African American poor in Northern cities. By the same token, few people would remember Mike Brown's name if protesters in Ferguson hadn't decided to stand their ground back in August against the overwhelming violence of the police.

King also insisted on something else--that he wouldn't "raise my voice against the violence of the oppressed in the ghettos without having first spoken clearly to the greatest purveyor of violence in the world today--my own government."

But the authorities in charge of that government consider their own violence to be something completely different--something they call law and order. In Their Morals and Ours, the Russian revolutionary Leon Trotsky wrote that "the ruling class forces its ends upon society and habituates it to considering all those means which contradict its ends as immoral. That is the chief function of official morality."

In other words, when they preach at us to be peaceful, what they really mean is they don't want us to challenge their authority to be violent.

That's especially true when those doing the challenging are African Americans. Back in August, people around the country and the world were horrified at the sight of militarized police forces patrolling the streets of Ferguson in the aftermath of Mike Brown's murder. The police were obviously adopting the Pentagon's tactic of subduing enemy populations through a show of overwhelming military might and using it against the local Black population.

This idea that African Americans are an enemy force was amplified on the New York Daily News' cover on the day after the grand jury decision. "America Holds Its Breath," screamed the headline--as if the millions of angry Black people that the Daily News was holding its breath about aren't part of "America."

With the headline running alongside a picture of an anguished Lesley McSpadden, an ugly truth was laid bare: the media are incapable, through their racist fear, of showing basic sympathy with a grieving mother who was just wronged by the justice system for a second time.

"THERE CAN be no such thing as a 'fair trial' of a Negro boy accused of rape in an Alabama court." That's what the Communist Party argued in its campaign for the Scottsboro Boys, nine African Americans falsely accused of raping two white women in the 1930s. Moderate civil rights organizations like the NAACP didn't want to associate themselves at first with such a "disrespectable" case, but the radicals took it up and turned it into a national symbol of injustice in the Jim Crow South.

Today, there can be no such thing as justice for a Black person who is targeted for violence or harassment by police.

In 2012, following the murder of Black teenager Trayvon Martin in Florida, a study by the Malcolm X Grassroots Movement found that an African American was killed once every 28 hours by a police officer, security guard or vigilante.

So it was no surprise when there were more unarmed Black victims of police in the days when people across the country were anxiously awaiting the Ferguson grand jury decision. One of them was 12-year-old Tamir Rice, killed by Cleveland police who claimed to mistake his toy gun for a deadly weapon.

In all likelihood, this murder, as almost all police killings are, will be reported as a "justifiable homicide"--regrettable perhaps, but the officers involved won't face indictments on any charges. That normalization of police violence is precisely what the protesters in Ferguson and around the country--demonized in the media for their "violence"--are trying to end.

For the people who took to the streets to seek justice in Ferguson and elsewhere, the failure to indict Darren Wilson will be felt as a devastating blow. But the movement to stop the police from killing the next Michael Brown hasn't been stopped in its tracks. That was clear from the big protests that continued around the U.S. in the days after the grand jury decision.

In those demonstrations, a number of protesters are starting to reject the conservative advice of well-known civil rights leaders who, like the NAACP in the days of Scottsboro, have at times seemed less concerned with how to win justice than with how to keep the protests "respectable."

The media portray such differences as a generation gap--or a conflict between the good peaceful protesters and the bad radical agitators who confront police. But the actual differences are about political strategy and vision, and social class. It's significant that one of the most consistent contingents at Ferguson demonstrations over the last two months was low-wage workers mobilized around the Fight for 15--because they see their struggle for economic justice as connected to the fight for racial justice.

Many of the activists dedicated to the anti-racist struggle are coming together in new organizations to make sure the movement doesn't fade out when Ferguson and the murder of Mike Brown leave the front pages. For now, these formations are taking a lead in sending a defiant message of resistance. But they will also be crucial in preparing for the further struggles to come.

The struggle against racism and police violence is far from over. Moving the struggle forward will require the commitment to keep up the organizing--and fight for the vision of a different kind of society.