MARIA CARABALLO was chained to the bed while she was giving birth in a New York state prison.

"I had one hand cuffed to the bed through everything," she remembered, according to a Correctional Association of New York report. "When I was pushing, when I was in pain, when my daughter actually came out. The whole time, I couldn't even sit up...They even kept the shackle on me when they were taking out the placenta and stitching me up. In total, I was shackled for eight hours." After her daughter was born, she was only able to hold her in one free arm for a few minutes.

Her experience is all too typical of what pregnant women endure in New York prisons. The investigation by the Correctional Association--the only organization authorized by law to go into New York prisons and interview prisoners--found that 23 of the 27 women surveyed were shackled when they gave birth.

Shackles include everything from basic handcuffs, to a metal box connected to a chain between the cuffs, to ankle shackles and a waist chain attached to the handcuffs. 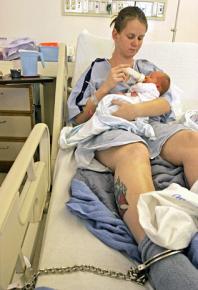 Since 2009, it's been illegal to shackle pregnant women in New York prisons. That hasn't stopped the state Department of Corrections from routinely flouting the law, however. Women have been chained on the way to and from the hospital, and even while they were recovering after having a baby.

Jacqueline McDougall had an emergency cesarean section and needed a blood transfusion when she gave birth in the Westchester Medical Center. The Corrections Department kept her chained all the way back to the prison. Her handcuffs were linked to a chain around her waist and clamped together over her sutured incision. "With the weight on the stomach," she told a New York Times reporter, "it felt like they were ripping open my C-section."

Almost half of the women that the Correctional Association interviewed were shackled on the way to hospital, including nine who were in labor at the time. Two were chained to the stretcher in the ambulance while they were in labor, and another was put in handcuffs chained to a metal box during her trip to the hospital.

In all, Correctional Association investigators reported that two-thirds of the women they talked to were chained during the trip from the hospital back to the prison, including 12 women who were put in full shackles (handcuffs, metal box, ankle shackles and waist chain.) Three of them had given birth by cesarean section just days earlier. One, who had a cesarean section three days before being taken back to prison, said the shackles caused her "a lot of pain." Another described how her son "was screaming, and I couldn't do anything about it" because she was handcuffed to the metal box.

Women have even been shackled while they were recovering in the hospital. Some were kept in chains for hours after their baby was born. One was in handcuffs and ankle shackles for over five hours after she gave birth. Another woman was chained for four hours after delivering her baby. "Where would a woman go after giving birth?" she asked.

NEW YORK Gov. Andrew Cuomo could end this abomination anytime he wanted. Cuomo appoints the Corrections Commissioner who reports directly to him. Prison wardens could be fired immediately if a pregnant woman was shackled on their watch.

Cuomo likes to pose as a great champion of women's rights. During his re-election campaign last year, he even created a Women's Equality Party to endorse him--though this was primarily a scheme to take votes away another liberal party, not a statement against discrimination against women.

Pregnant women in prison obviously don't qualify for his concern, however.

The establishment women's organizations could influence Cuomo if they would only try. They have the loyalty of some of Cuomo's staunchest supporters, and in the quid-pro-quo world of New York politics, that would at least earn them a sympathetic hearing from his administration. Ending the shackling of pregnant women would be little enough to ask.

These organizations have put their ties to liberal Democrats like Cuomo ahead of the needs of incarcerated pregnant women. This is especially tragic because, short of a riot or a hunger strike, the people stuck behind bars in New York prison are typically out of sight, out of mind--and off the two-party political agenda.

Their families do whatever they can, but they are usually desperately poor and largely powerless themselves. It is often a huge sacrifice just to visit their loved ones.

Fortunately, there is a new awareness of mass incarceration in America, thanks to Michelle Alexander's book The New Jim Crow and the organizing of the Black Lives Matter movement. But ending this shackling of pregnant women shouldn't have to wait for the total overhaul that the "criminal justice" system requires. It should concern not only feminist organizations, but the civil rights movement, religious and human rights groups, and Black Lives Matter activists.

Surely even one more pregnant woman forced into chains and shackles in prison is one too many.